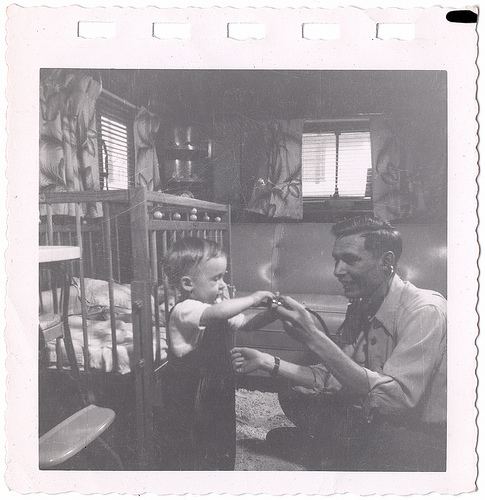 Editor’s Note: This is a guest post from Sean Platt.

Whenever I’m watching a movie that harkens back to a sepia tinted yesteryear, it isn’t the simpler times I long for so much as a return to the distant days when a man rose alongside the sunrise and was expected to give the daylight his best.

Clothes were sharper, adolescence shorter, and the word man still deserving of the first spot in the word manners. Now it seems as if there is something missing, something stripped from today’s men, besides their buttons and blazers. I peer at photographs of my grandfather in his prime, and ponder the polarity of our worlds. A dozen decades have hurtled by with such speed; it seems they have left our populace with a case of collective amnesia. I look past the creases of my curling photographs, grateful that I can still teach my son what I believe it means to be a man.

The fellows in those old photos look like they had manners, you can practically see them. Even greasy and fatigued, they never went outside without a hat to hold the hair upon their head. It is difficult to believe that they would have left behind their pleases and thank yous. If it were only manners abandoned, things might be easier to explain to my boy, but it isn’t. There is a mindset now missing, an outlook thickened by decades of languor.

If I were to stare in my son’s eyes, and explain what it is that makes a man, I would not breath a word about how much that man might bench, or in which athletics he may excel. My inventory would be different; a list our grandfathers would surely approve.

I would tell my son that he must never walk away from what he knows is right, and though it may be hard to stand tall against our enemies, it is even harder to reach for the sky opposite our friends. I would tell my son that he must do both, always and without fail. A man who goes along with that which he knows is wrong, whether it is to be a part of something or simply because it is easier, will see less than he wishes when looking in the mirror.

We may not need to wear three piece suits, seven days a week to look our best, but that doesn’t mean we should leave our houses looking like slobs. Proper grooming reveals our respect. Respect for ourselves, respect for those in our company, and respect for those we happen to meet. Proper grooming is not the sole domain of the affluent. Soap is cheap and time runs in equivalence to air.

My boy will know to open the door for his wife, because every day he watches me open the door for mine. Somewhere in the midst of the feminist movement, there was a misunderstanding. Just because we are no longer required to do something by the reduced laws of society, doesn’t mean we never should.

I can only imagine how the beat of the world will be bouncing by the time my son is teaching his boy to be a man, but I do know that by being the best father I can be, I’m shaping a fraction of our collective future. As I teach my son, so I teach my grandson. Those values that are most important to me, are the values that will grow dearest to him.

In between the large lessons learned, are the small examples set. Those things which go unspoken perhaps, but rarely unnoticed. For example, my son will know how to admit when he is wrong, because a real man does not always carry the need to be right. Being a man means recognizing when we err, and then extracting our best lesson from the experience. He will know how to play with his children, because he will use the same imagination he has always been encouraged to use.

Possibly the single most important lesson in this brave new world, where a treacherous credit line is often but a signature away, is responsibility. My son will understand that things should be bought only when needed, and that we should pay for them only with money we have.

A man, above all, recognizes his duty and therefore does not accept it lightly. He understands that his word is his bond, exercised by everyday actions and daily decisions. He will not waft through life selfish or disconnected, like someone who carries a fickle mind. A man, a real man, will not make promises he cannot keep, and chooses his words as carefully as he does his commitments. And because this man honors his words, he is in turned honored in his actions.

And while years may fall carelessly from the calendar, and the world may pass us by like a reckless wind, it is never too late to man up and mean it.