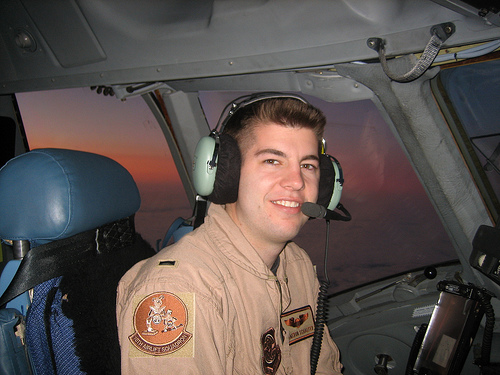 Today we return to our “So You Want My Job” Series, in which we interview men who are employed in the kind of jobs men dream about having, and ask them about the reality of their work and for advice on how men can finally become what they always wanted to be when they grew up.

For this second installment, we interviewed Cameron Schaefer, regular AoM contributor, author of Schaefer’s Blog, and high-flying Air Force pilot. Many thanks to Cameron for participating.

I am 24 years old and currently live in Tacoma, WA with my wife and 9-month old daughter. I was born and raised in Laramie, WY. I grew up playing lots of sports and enjoyed all things outdoors. I attended the US Air Force Academy in Colorado Springs, CO graduating in 2006. Upon graduation, I attended Undergraduate Pilot Training (UPT) at Vance AFB in Enid, OK. After logging over 200 hours in the T-6 Texan and T-1 Jayhawk I earned my wings and moved with my family to McChord AFB last June to begin my career as a C-17 pilot. When I’m not blogging or exploring the local area with the family, I’m usually flying missions overseas, transporting troops and equipment wherever and whenever the US forces need us.

2. Why did you want to become an Air Force pilot? When did you know that it was what you wanted to do?

When I was young I remember watching movies like “Top Gun” and “Iron Eagle” and being fascinated with flying and the idea of being a pilot. Since the Air Force Academy was in the same athletic conference as Wyoming, I got to see the Academy cadets when they would come up to play us in football. There was no doubt that their lives were much different than the average college student, and I was intrigued. I ended up going to the Air Force Academy, but still wasn’t 100% sure if I wanted to be a pilot. During the summers we would get to visit Air Force bases around the world and often got rides in various jets. After getting rides in both the C-5 and F-16, I decided flying would be a much better job than sitting behind a desk all day. I was right.

3. If man wants to become an Air Force pilot, how should he best prepare? What’s the best route into the job?

There are really two large hurdles to becoming a pilot: 1) Only officers are allowed to fly, so first you have to be commissioned as an Air Force Officer. There are 3 avenues to officership: the Air Force Academy, ROTC, and Officer Training School (OTS). 2) One has to compete and be selected to attend pilot training. Oh yeah, and then you actually have to get through pilot training which isn’t a given.

For preparation I would say do well in school and be a well-balanced person. Air Force pilots are known for being able think well under stress and multi-task. Playing sports is one of the best ways to develop these attributes. Some might say get your Private Pilot’s License. While it certainly won’t hurt you, it is not necessary in my opinion. Out of my UPT class only a handful of guys had a PPL before they arrived and I saw no correlation between that and their performance relative to the rest of us. Military flying is much different than civilian flying.

As far as the best route, I admit that I’m biased, but going to the Academy gives you the best chance of becoming a pilot. Every year there are around 1,000 pilot slots available Air Force wide for pilot training, and half of those are given to the Academy and the other half are split among all the ROTC programs across the country as well as OTS. So, using my Academy class as an example, we had approximately 900 cadets in the class of 2006 and there were around 500 pilot training slots available. Many cadets either didn’t want to fly or were medically disqualified, so by the end there ended up being more pilot training slots available for our class than people that wanted them. At the Academy, if you want to fly and are medically qualified, chances are extremely high you will get a slot.

4. How competitive is it to land a job as an Air Force pilot?

Extremely. You’re going up against a lot of guys who are used to succeeding in life, lots of type-A personalities. In the end though, there are a limited number of pilot slots and so you’re graded on everything you do then racked and stacked at the end. And when you get to Pilot Training it doesn’t let up. Now everyone is competing for specific airframes, and that can get pretty intense at times.

5. You graduated from the Air Force Academy. What’s the application process like there? What sets applicants apart? Any tips?

Last year 9,163 men and women applied and only 1,287 were admitted…so it’s a bit selective. In order to even apply you have to be an American citizen between the ages of 17-23 and unmarried with no dependents. Additionally, you must obtain a nomination by a member of Congress from your home state. Each congressman/woman generally sets up an interview board to interview potential candidates between the summer of the junior and senior year of high school and into the fall. There are almost always several more people competing for an appointment than slots available, so this is really the first big hurdle.

On top of all this is the academic, physical and leadership requirements. The average Academy cadet comes from the top 3% of his/her high school class, averages around a 1300 on the SAT’s and 30 on the ACT’s and has a 3.85 GPA. On top of this you have to be involved in extracurricular activities, pass a physical fitness test, and a rigorous medical exam. All this to say, it’s a bit more extensive than the average college admissions process. This became pretty clear to me when I asked the kid next to me at freshman orientation what he got on the SAT’s and he responded, “1600,” without blinking.

As far as what sets applicants apart and how to prepare, my advice would be to focus on getting great academic scores and be as well-rounded as possible. Participate in athletics, school clubs, community service, etc. The admissions people are looking for the whole person, not just a brainiac that can do complex math proofs.

6. What sets a candidate apart from others when he’s seeking a pilot position?

The ability to quickly process large amounts of data under stress. 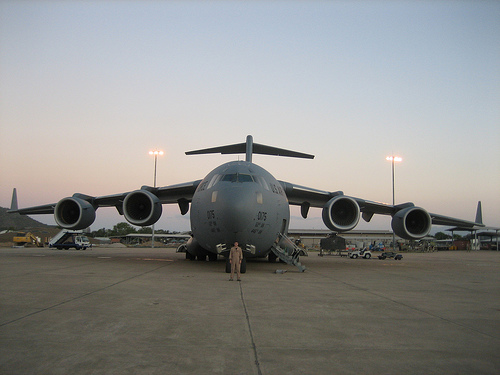 7. What the average starting salary for an Air Force pilot?

They say it’s impolite to share your salary, but when you work for the military and your pay chart is available for anyone to see on the internet I don’t mind answering. It’s hard to say the average simply because your pay is based on your rank in the military as well as your duty location, not your job (although pilot’s do receive a small amount of extra pay each month for flying duties). But, since most starting pilot’s are 1st Lieutenants (O-2) when the arrive at their first duty station, we’ll use them as an example. Base pay is around $3,300 a month with an additional $1000 or so for housing (determined by location). This brings the annual salary to just over $51,000. And of course, every few years as you get promoted and you gain years in service your pay increases.

For me it is two things: 1) Knowing that you’ve made a valuable contribution every time you fly, whether it’s transporting troops or dropping off supplies in support of natural disaster relief. 2) Traveling all over the world and experiencing so many different cultures. So far, I’ve only been operational for a few months and I’ve already gotten to go to 10 different countries!

9. What is the worst part of the job?

Being away from family so often.

10. Are there any misconceptions that people have about the job?

I think a lot of people think we just hop in the jet and go joyriding, not realizing how scripted each mission is and how much planning is involved. Not to say that it isn’t fun, but there is always a mission whether it’s operational or simply training. Also, I don’t think people realize how young most of us are. The reality is many of our jets are filled with crews where the oldest person on board is 26 or 27. The fact that a 26-year old can be in charge of a $200 million aircraft is pretty amazing.

It’s a bit rough, mainly because even when we’re not deployed we’re gone on 10-14 day missions overseas quite frequently. It’s a big adjustment seeing your family in spurts rather than on a day-by-day basis. It makes it even more important to be intentional about the time you do have together.

12. What’s the hierarchy like in the Air Force? How does one “move up” in the job?

The first few years as long as you don’t get in major trouble you’ll get promoted. As you hit the mid-level ranks like Major (O-4) things start getting more competitive, and you actually have to separate yourself from the pack in some way to rise to the next rank. Every few years you go up before a promotion board and they look at your records and decide if you should be promoted or remain in your current rank. Like many career fields it can get a bit more political the higher up you go, but for the most part your promotion is dependent on how much you stand out from the rest of your peers.

Being a pilot is one of the most enjoyable and fulfilling jobs I can think of. Whether one becomes an Air Force pilot or simply takes a few lessons and gets their Private Pilot’s License, flying is something that has and always will fascinate us all. And whenever you hear a pilot telling war stories, take it in about the same way you would when you hear someone describing the size of the fish they just caught…it’s probably about 25% true and always gets better with age.

Do you have a cool man job? Are you willing to submit to some interview questions and share your wisdom and advice with other men? Would you like a FREE AoM t-shirt? Contact me.