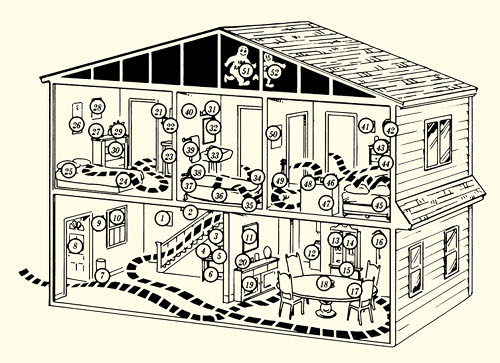 To create your mental map, you are going to take an imaginary walk, memorizing items as you go along. My suggestion is that you select a route you walk daily in your real life, such as a walk through your home. As you “walk,” you need to select 52 spots to store in your mental journal.

Here’s how it works:

1. Select 5 rooms in your house (i.e., bedroom, bathroom, kitchen, living room, garage).
2. Memorize 10 pieces of furniture in each room. Stand in the doorway of each room, and looking around the room, number 10 large items in a clockwise direction. For example, the first piece of furniture on your left may be a desk. Going around the room clockwise, #2 might be your bed, #3 could be a dresser, #4 a mirror, #5 a TV, etc. It really doesn’t matter which items you select, but if you use a television in one room, avoid using a television in another. And choose large items over small ones (e.g., the desk, not a pencil on the desk).
3. Repeat these 50 items over and over in your head until you can close your eyes and say them flawlessly and rapidly.
4. Now add 2 more pieces of furniture at the end—maybe in a new room or even 2 landmarks in your yard.

Create Images for Every Playing Card

This next part is where you use your creativity, and it is 100% up to you how you create the images. But every card needs to be turned into a noun (person, place, or thing). For example:

You get the idea; I just did 21% of the cards for you. There is no rhyme or reason to where these pictures come from and it doesn’t matter. All that matters is that you:

1. Create the images that make sense to YOU.
2. Spend time looking through a deck of cards over and over and over until you can recognize the image that goes with the card without hesitation.

Putting It All together

You have memorized a map of your home and have pictures for every playing card. Now for the fun part. You get a timer and hit start and then pick up a shuffled deck of cards. Going through the deck as fast as you can, imagine the pictures for the cards one by one on your furniture.

If the 1st card you see is the 7 of Hearts, and you are using the image of dice I suggested above, then imagine dice flying out of your #1 piece of furniture. The more action and emotion you can use the better. The more bizarre the image is the better chance it will stick in your mind. 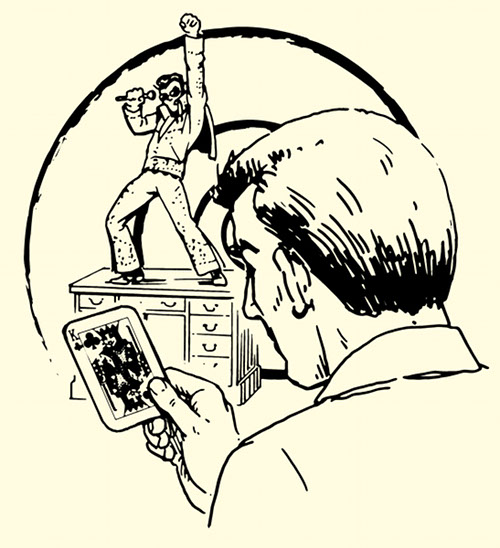 As you do this, make your pictures bizarre, unusual, and full of color and emotions. If you do, then you should be able to set the cards down, stop the timer and then pick up a second deck of cards and reassemble it to match the first deck by simply mentally walking through your home. Just like the top memory experts in the world do it.

1. Train to make sure you have your mental map and images for cards down cold.
2. Push your brain to go faster than you think is possible (you will be surprised).
3. HAVE FUN!!

Ron White (not the cigar smoking, scotch drinking comedian, although he does write his own jokes) is a two time USA Memory Champion who held the record for the fastest to memorize a deck of cards in the USA (1 minute 27 seconds) for 2 years. Perhaps you saw him on the History Channel show, Stan Lee’s “Superhumans.”