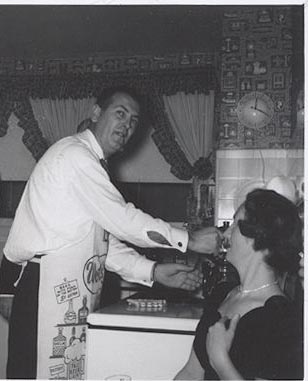 Editor’s Note: This is a guest post from Scott Kustes.

Back at the beginning of July, Brett asked the question, “Is cooking manly?” The poll results were astoundingly lopsided: 95% yes, 5% no. It looks like a vast majority of us are convinced that being able to turn a heap of meat and vegetables into a delicious meal is a vital skill for a man to have.

Why then does it seem that so many men are unable to do something as simple as grilling a proper steak, much less doing something more involved like making a pot of soup (an exceedingly simple task)? Frankly, I know so many guys that would have trouble feeding themselves if a blizzard came through that it’s laughable.

Why do so many of us think it’s manly to cook, yet are unable to do so? Obviously the average male thinks it’s great to be able to slap a steak or some pork chops on the grill. But what about cooking in the kitchen? Is the kitchen the realm of women? Today, let’s look at some reasons that every man should be able to put together a meal, and by “meal” I mean meat AND side dishes, cooked on a grill, a cast iron skillet, or in the oven.

A Man Is Independent

An overriding theme of the Art Of Manliness is that a man should be independent. But a man who can’t quickly throw together a meal is always going to be dependent on someone else to feed him, be that his wife, girlfriend, or McDonald’s. Dependency is not an admirable trait in a man. You don’t want to be the guy that has to turn to frozen pizzas just because your finer half decided to have drinks with the ladies.

If you depend on someone to provide you with something that you require daily, can you really consider yourself independent? Seriously, we pride ourselves on our proficiency with power tools, yet few of us touch a power tool on a weekly basis. But we do touch food every single day, yet lots of guys have relegated cooking to a woman’s job.

A Man Is Healthy and Strong

It’s been proven time after time: cooking at home is vastly healthier than eating out, especially if “eating out” means grabbing fast food. At home, you can control the ingredients used and the cooking methods. There are no hidden ingredients in your kitchen. You’ll be leaner, more muscular, and healthier. And there’s nothing manly about a guy who’s weak and sickly.

A Man Provides For Himself And Others

Remember that bit about independence above? Well, along with being able to provide for himself, a man who can cook can provide for the most important people in his life: his family and friends. Providing food for others has long been a manly trait, from our hunter-gatherer days of bringing home the mastodon, through modern times when most of the renowned chefs in the world are males. The ability to put together a complete meal when your wife is sick or tired (or sick and tired, probably of your crap) is very manly.

A Man Spends Time With His Family

Want to be involved in your kids’ lives? Spend time with them. Want to find out about the new boy your daughter has been hanging out with or what your son is doing after school? Spend some time with them.

No one could possibly argue that it’s unmanly to spend time with one’s wife and kids. So what about being able to provide them with a tasty dinner, while talking to them about their day at school or work?

Better yet, spend time with them in the kitchen. You can teach them the necessary skills to be healthy and independent while also being a father. Imagine raising a son who isn’t afraid to turn on the oven, who is comfortable wielding a knife, and understands how to saute an onion. Imagine him being able to select and combine herbs and spices. Imagine him teaching these same traits to your grandkids.

Here are two bonuses for the man that can cook.

It Impresses the Ladies

There seems to be two skills that women are unable to resist. One is handiness with a guitar or a set of drums. The second is the ability to throw together a damn righteous meal. There are others, but we’ll start with these two. If you master one of these, you’re on the right track to getting to show her your other skills.

Now, there’s no question that me with a musical instrument is bad for the ears of anyone within earshot. However, I have that second skill mastered. And here’s the fun part: you don’t have to throw together an artistic dinner; as long as it tastes good and looks and smells appetizing, you’re impressing her. You don’t have to go all Iron Chef or make the plate look like you’re eating at a French restaurant where you’re spending $60 per plate. A bit of attention to detail and being cognizant of food style won’t hurt, but it’s not a necessity.

How much money? Well, for around $75 per week, I eat about 3,000 calories per day of locally-raised grass-fed beef and lamb, pastured pork and poultry, wild seafood, bags full of seasonal fruits, vegetables, herbs, and spices from the farmer’s market, and plenty of healthy fats from olive and coconut oils. When I hear someone say, “How can I eat healthy if I only have $100 a week to spend on food?” I laugh. It’s not a lack of money, but a lack of planning that keeps most of us guys from feeding ourselves right.

I will guarantee that when you factor in a drink or two each, salads, entrees, and tip, you can’t walk out of a plain Jane restaurant with a date for under $40, let alone some place that’ll serve something as tasty as you can cook up on your own. As an example, I recently cooked up 2 pounds of grilled lamb chops with side dishes, salads, and a bottle of good wine for about $25 and that served my date and I and provided leftovers for me to have another meal. I couldn’t even have purchased that bottle of wine at a restaurant for $25.

Be A Man: Learn To Cook

So in the end, is it manly to cook? I think it’s unmanly not to be able to cook. I grew up in a household where my stepdad could flat out throw down in the kitchen. And hot damn if he couldn’t cook up a killer meal — meat, vegetables, and plenty of flavor all included. The role of male cooking in the household wasn’t restricted to lighting a grill and slapping down a slab of beast.

So what does it take to be a decent cook? It’s really quite simple. Can you read? If you can read, you can cook. All you have to be able to do is measure a few ingredients and follow some simple instructions. After a little while following someone else’s directions (ask for favorite recipes from your mom, grandma, and if you were lucky enough to have a dad who cooked, him), you’ll learn what flavors you like and figure out how to incorporate them into your own recipes. Deference to someone who knows more than you and experimentation are yet two more manly traits that go with cooking.

The real key to cooking is simply advanced preparation. The ability to think ahead, spend 45 minutes in the grocery store with a list, and pull together the necessary meats and vegetables for your week of cooking makes it easy to be sure Ramen and a can of tuna doesn’t become Tuesday night’s dinner.

So sharpen your knives, stock the fridge, and get to cooking. Really, the worst thing that’s going to happen is that you’ll eat something that doesn’t taste very good a few times.