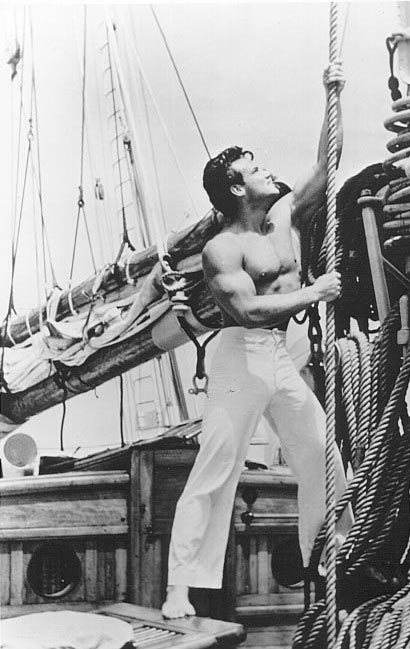 I soon got used to this singing, for the sailors never touched a rope without it . . . Some sea captains, before shipping a man, always ask him whether he can sing out at a rope.

It’s the 19th century. You’re a young man seeking adventure and a test of your manhood. You decide to sign up on a ship to see exotic foreign lands. You take the trip to the coast. You find a big coastal town and you walk through the docks admiring the ships. Finally, you spot one that you like. You walk on deck and a tall man dressed in black coat confronts you. It’s the captain.

He looks you up and down, and says “Aye. But first I need to give you a test.”

You’re not worried. You were expecting this and, in fact, hoping for it. You want to show the captain what you can do. After all, you were always the strongest out of all your friends. You could climb up any rock or tree since you learned how to walk. And you also knew a bit about navigation from your grandfather. You were eager to show what a great addition to the crew you’d make.

“How well can you sing?” the captain asks.

Sea Shanties were work songs sung on ships during the age of sail. They were used to keep rhythm during work and make it more pleasant. Because these songs were used to accomplish a goal, rather then for pure entertainment, the lyrics and melody were not very sophisticated. Still, the songs were usually meaningful and told of a sailor’s life, which included backbreaking labor, abuse from captain and crew, alcohol, and longing for girls and dry land.

A typical shanty had a call-and-response format. One sailor(a shantyman) would call out a verse, to which the rest of the sailors would respond in unison. The work would occur usually on the last syllable of the response or some other cue. An example can be found in the movie Moby Dick:

Shantyman: Our boots and clothes are all in pawn

There was also a fifth kind of sailor song, which wasn’t really considered a true shanty because it was not used for work. Foc’sle, forecastle or forebitters were songs sung after the work was over. They were named after the sailor’s living quarters, where they would gather around to drink and sing wild ballads. For the purpose of the article I’m including a few of them as shanties.

The categories weren’t set in stone and sailors would often borrow songs and change the melody and rhythm to suit their work. It seems the only rules regarding sea shanties were that the songs talking about  life at sea were sung on the outward part of the journey, and songs talking about coming home and dry land were sung while the ship was homeward bound.

Today, not many people know about the existence of sea shanties. They are usually sung at sea festivals and pirate shows. You can sometimes hear them in movies about the sea, such as Master and Commander and Moby Dick. But the true tradition of shanties ended with the age of sail.

1. Blow the Man Down

A very popular halyard shanty among modern shantymen. The Spongebob Squarepants theme is a variation of this tune. The version sung on ships usually told about a policeman accusing a sailor of being a black baller and the insulted sailor knocking the policeman down and ending up in jail. The modern version usually tells a story about a sailor meeting a pretty young damsel. The title and chorus refer to the abuse sailors endured on the ships of the Black Ball line.

A capstan shanty of African-American origin. The song told about the indulgences sailors dreamed of partaking once they came on shore. It was very easy to add lyrics to it, and so individual sailors would list things they loved most that “wouldn’t do them any harm.”The line, “A drop of Nelson’s blood wouldn’t do us any harm,” refers to Horatio Nelson whose body was put in a casket of brandy following his death at  the battle of Trafalgar.

3. The Coasts of High Barbary

This one was a forecastle song. Originally an English song, it was later rewritten by American sailors to tell about a victorious battle with pirates disguised as another ship. The pirates pleaded for mercy but the sailors gave them no quarter.

This is the song that you can hear in Master and Commander and Jaws. It was a capstan shanty sung on homeward bound journeys. The lines “we’ll rant and we’ll roar like true British sailors, we’ll rant and we’ll roar along the salt seas,” might as well have been a battle cry. The verse “we’ll drink and be jolly and drown melancholy,” perfectly describes the sailor’s recipe for a bad mood.

5. The Bonny Ship The Diamond

This was a forecastle song telling a true story about whaling ship The Diamond which was lost at sea in 1819. Whaling in the age of sail was perhaps the most dangerous job a man could do. Sailors were required to kill the biggest creature on earth from a rowboat. The frost and winds and hard work alone were enough to make sure that only the toughest men signed up for the job.

6. Rolling Down to Old Maui

Another whaling forecastle song. This one featured a sweet melody which reflected the melancholy of tired sailors. It told about coming home from a whaling trip and describes leaving behind the hardships of hunting for whales.

A halyard shanty about going around Cape Horn to whale. Rounding Cape Horn was one of the toughest tasks in the age of sail because of the strong and unfavorable winds in the area.

There is some speculation as to what “blood red roses” is referring to. Some people say it’s a name for the Royal British marines who wore a red uniform. Others say it’s referring to whale’s blood on the surface of the water.

A forecastle ballad. Fiddler’s Green is sailors’ and fishermen’s version of heaven. A place where there is no work, where you have a mug of beer that refills itself, and there are pretty ladies dancing to a sound of fiddle that never ends. The idea of Fiddler’s Green was taken from an old Irish legend and adapted by sailors because at sea the dying did not have the chance to get properly anointed and therefore did not have the chance to enter Christian heaven.

A very sad capstan shanty(although it was probably sung more often in the forecastle). As with all shanties, there are many versions, but the basic story is that the sailor dreams about his love and in that instant he knows that she has died. There are versions where it’s the sailor’s girl that dreams about the sailor. Some versions are more elaborate and include sailors seeing red roses on his girl’s body as a symbol of blood, wet hair as a sign of drowning, and so on. In some versions after the death of a sailor the girl cuts her hair so that no other man will find her attractive.

A short haul shanty. Another popular shanty among modern shantymen. It contains, in my opinion, the best two lines of any shanty or sea song: “When I was a little boy my mother always told me…That if I did not kiss the girls, my lips would grow all moldy.” The rest of the song usually tells about the sailor’s adventures with women of different nationalities until he finds one that’s “just a daisy.”

Sea Shanties in the Movies