Bishnu Shrestha, who had just retired from the Indian army where he served as a Gorkha soldier, held off a horde of robbers that tried to rob a train in India. From the article on Republica:

“The band of about 40 robbers, some of whom were traveling as passengers, stopped the train in the Chittaranjan jungles in West Bengal around midnight. Shrestha– who had boarded the train at Ranchi in Jharkhand, the place of his posting–was in seat no. 47 in coach AC3.

“They started snatching jewelry, cell phones, cash, laptops and other belongings from the passengers,” Shrestha recalled. The soldier had somehow remained a silent spectator amidst the melee, but not for long. He had had enough when the robbers stripped an 18-year-old girl sitting next to him and tried to rape her right in front of her parents. He then took out his khukuri and took on the robbers.

“The girl cried for help, saying ´You are a soldier, please save a sister´,” Shrestha recalled. “I prevented her from being raped, thinking of her as my own sister,” he added. He took one of the robbers under control and then started to attack the others. He said the rest of the robbers fled after he killed three of them with his khukuri and injured eight others…“Fighting the enemy in battle is my duty as a soldier; taking on the dacoits in the train was my duty as a human being,” said the Indian army nayak.

Essentially, one man took on 40 armed thieves with only a khukuri. What is a khukuri? 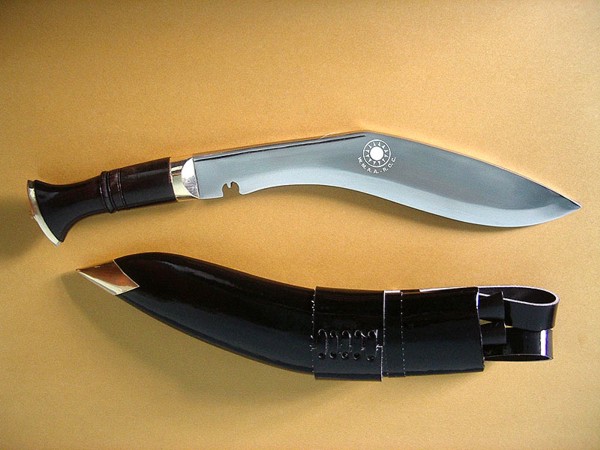 To be filed under: Bad. Ass.

Hat tip to Phillip H. for this link.