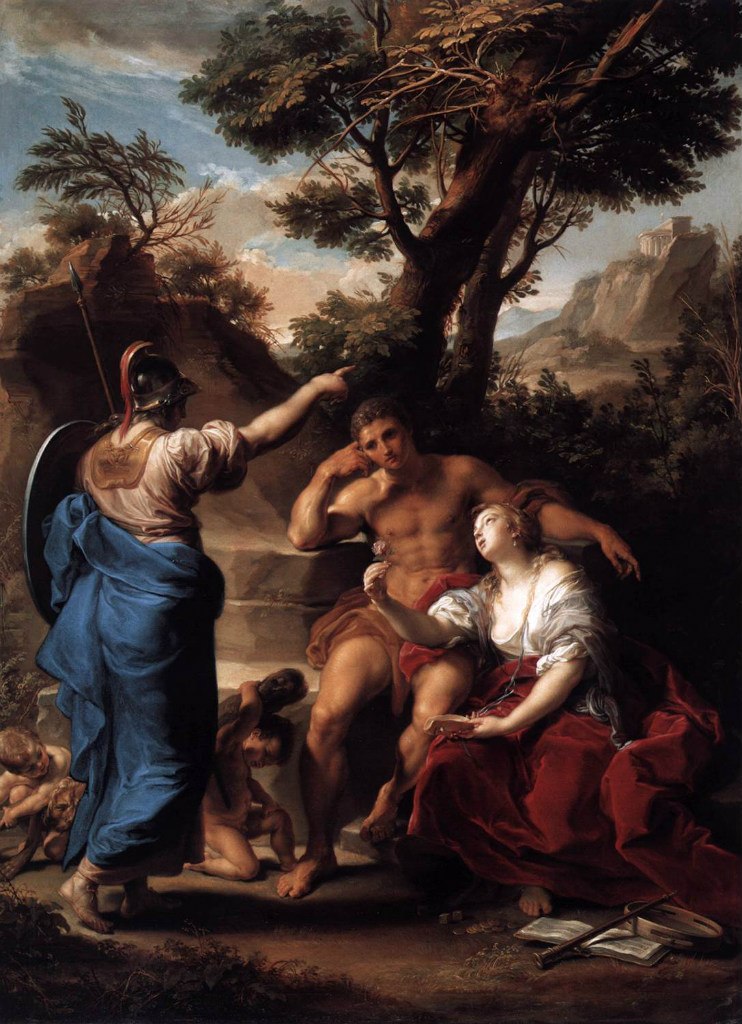 Editor’s note: Xenophon (430–354 B.C. ) was an ancient Greek historian and student of the philosopher Socrates. His Memorabilia is a collection of Socratic dialogues which purports to record the defense Socrates made for himself during his trial before the Athenians. While arguing against indolence and for the beneficial effects of labor, Socrates cites a story told by the Sophist Prodicus: The Choice of Hercules.

This story was popular throughout the eighteenth century and was frequently studied by young men and depicted by artists. John Adams used it to guide his life and wished to make an illustration of the tale the design for the Great Seal of the new nation. The allegory’s power lies in its ability to convey a profound truth: that there can be no sweet without the bitter, no growth and no true happiness without effort and virtue.

The Choice of Hercules
From the Memorabilia
By Xenophon, c. 371 B.C.

When Hercules was in that part of his youth in which it was natural for him to consider what course of life he ought to pursue, he one day retired into a desert, where the silence and solitude of the place very much favored his meditations.

As he was musing on his present condition, and very much perplexed in himself, on the state of life he should choose, he saw two women of a larger stature than ordinary, approaching towards him. One of them had a very noble air, and graceful deportment; her beauty was natural and easy, her person clean and unspotted, her motions and behavior full of modesty, and her raiment was white as snow. The other wanted all the native beauty and proportion of the former; her person was swelled, by luxury and ease, to a size quite disproportioned and uncomely. She had painted her complexion, that it might seem fairer and more ruddy than it really was, and endeavored to appear more graceful than ordinary in her bearing, by a mixture of affectation in all her gestures. She cast her eyes frequently upon herself, then turned them on those that were present, to see whether any one regarded her, and now and then looked on the figure she made in her own shadow.

As they drew nearer, the former continued the same composed pace, while the latter, striving to get before her, ran up to Hercules, and addressed herself to him:

“My dear Hercules,” says she, “I find you are very much divided in your thoughts, upon the way of life that you ought to choose; be my friend, and follow me; I will lead you into the possession of pleasure, and out of the reach of pain, and remove you from all the noise and disquietude of business. The affairs of either peace or war, shall have no power to disturb you. Your whole employment shall be to make your life easy, and to entertain every sense with its proper gratifications. Sumptuous tables, beds of roses, clouds of perfumes, concerts of music, crowds of beauties, are all in readiness to receive you. Come along with me into this region of delights, this world of pleasure, and bid farewell forever, to care, to pain, to business.”

Hercules, hearing the lady talk after this manner, desired to know her name; to which she answered, “My friends, and those who are well acquainted with me, call me Happiness; but my enemies, and those who would injure my reputation, have given me the name of Pleasure.”

By this time the other lady came up, who addressed herself to the young hero in a very different manner.

“Hercules,” says she, “I offer myself to you, because I know you are descended from the gods, and give proofs of that descent by your love to virtue, and application to the studies proper for your age. This makes me hope you will gain, both for yourself and me, an immortal reputation. But, before I invite you into my society and friendship, I will be open and sincere with you, and must lay down this, as an established truth, that there is nothing truly valuable which can be purchased without pains and labor. The gods have set a price upon every real and noble pleasure. If you would gain the favor of the Deity, you must be at the pains of worshiping him: if the friendship of good men, you must study to oblige them: if you would be honored by your country, you must take care to serve it. In short, if you would be eminent in war or peace, you must become master of all the qualifications that can make you so. These are the only terms and conditions upon which I can propose happiness.”

The goddess of Pleasure here broke in upon her discourse: “You see,” said she, “Hercules, by her own confession, the way to her pleasures is long and difficult; whereas, that which I propose is short and easy.” “Alas!” said the other lady, whose visage glowed with passion, made up of scorn and pity, “what are the pleasures you propose? To eat before you are hungry, drink before you are athirst, sleep before you are tired; to gratify your appetites before they are raised. You never heard the most delicious music, which is the praise of one’s own self; nor saw the most beautiful object, which is the work of one’s own hands. Your votaries pass away their youth in a dream of mistaken pleasures, while they are hoarding up anguish, torment, and remorse, for old age.”

“As for me, I am the friend of gods and of good men, an agreeable companion to the artisan, a household guardian to the fathers of families, a patron and protector of servants, an associate in all true and generous friendships. The banquets of my votaries are never costly, but always delicious; for none eat and drink at them, who are not invited by hunger and thirst. Their slumbers are sound, and their wakings cheerful. My young men have the pleasure of hearing themselves praised by those who are in years; and those who are in years, of being honored by those who are young. In a word, my followers are favored by the gods, beloved by their acquaintance, esteemed by their country, and after the close of their labors, honored by posterity.”