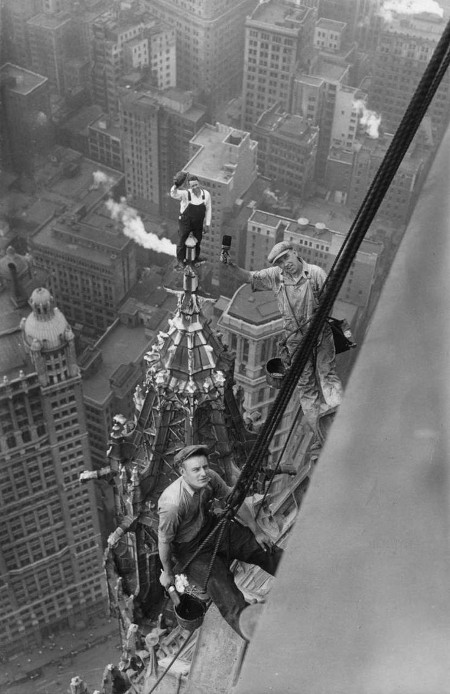 From The Works of Orville Dewey, 1893

I wish to set forth, as I regard it, the great law of human industry. It is worthy, I think, of being considered, and religiously considered, as the chief law of all human improvement and happiness. And if there be any attempt to escape from this law, or if there be any tendency of the public mind, at any time, to the same point, the eye of the moral observer should be instantly drawn to that point as one most vital to the public welfare.

What, then, is the law? It is that industry, — working either with the hand or with the mind, — the application of the powers to some task, to the achievement of some result, lies at the foundation of all human improvement.

Every step of our progress from infancy to manhood is proof of this. The process of education, rightly considered, is nothing else but wakening the powers to activity. It is through their own activity alone that they are cultivated. It is not by the mere imposition of tasks or requisition of lessons. The very purpose of the tasks and lessons is to awaken and direct that activity. Knowledge itself cannot be gained, but upon this condition, and, if it could be gained, would be useless without it.

The state into which the human being is introduced, is, from the first step of it to the last, designed to answer the purpose of such an education. Nature’s education, in other words, answers in this respect to the just idea of man’s. Each sense, in succession, is elicited by surrounding objects and it is only by repeated trials and efforts that it is brought to perfection. In like manner does the scene of life appeal to every intellectual and every moral power. Life is a severe discipline, and demands every energy of human nature to meet it. Nature is a rigorous taskmaster; and its language to the human race is, “If a man will not work, neither shall he eat.” We are not sent into the world like animals, to crop the spontaneous herbage of the field, and then to lie down in indolent repose: but we are sent to dig the soil and plough the sea; to do the business of cities and the work of manufactories. The raw material only is given us; and by the processes of cookery, and the fabrications of art, it is to be wrought to our purpose.

The world is the great and appointed school of industry. In an artificial state of society, I know, mankind are divided into the idle and laboring classes; but such, I maintain, was not the design of Providence. On the contrary, it was meant that all men, in one way or another, should work. If any human being could be completely released from this law of Providence, if he should never be obliged so much as to stretch out his hand for anything, if everything came to him at a bare wish, if there were a slave appointed to minister to every sense, and the powers of nature were made, in like manner, to obey every thought, he would be a mere mass of inertness, uselessness, and misery.

Yes, such is man’s task, and such is the world he is placed in. The world of matter is shapeless and void to all man’s purposes, till he lays upon it the creative hand of labor. And so also is the world of mind. It is as true in mind as it is in matter, that the materials only are given us. Absolute truth ready made, no more presents itself to us in one department, than finished models of mechanism ready made, do in the other. Original principles there doubtless are in both; but the result — philosophy, that is to say, in the one case is as far to seek as art and mechanism are in the other.

Such, I repeat, is the world, and such is man. The earth he stands upon and the air he breathes are, so far as his improvement is concerned, but elements to be wrought by him to certain purposes. If he stood on earth passively and unconscious, imbibing the dew and sap, and spreading his arms to the light and air, he would be but a tree. If he grew up capable neither of purpose nor of improvement, with no guidance but instinct, and no powers but those of digestion and locomotion, he would be but an animal. But he is more than this; he is a man; he is made to improve: he is made, therefore, to think, to act, to work. Labor is his great function, his peculiar distinction, his privilege. Can he not think so? Can he not see, that from being an animal to eat and drink and sleep, to become a worker; to put forth the hand of ingenuity, and to pour his own thought into the moulds of nature, fashioning them into forms of grace and fabrics of convenience, and converting them to purposes of improvement and happiness,—can he not see, I repeat, that this is the greatest possible step in privilege?

Labor, I say, is man’s great function. The earth and the atmosphere are his laboratory. With spade and plough, with mining-shafts and furnaces and forges, with fire and steam; amidst the noise and whirl of swift and bright machinery, and abroad in the silent fields, beneath the roofing sky, man was made to be ever working, ever experimenting. And while he, and all his dwellings of care and toil, are borne onward with the circling skies, and the shows of heaven are around him, and their infinite depths image and invite his thought, still in all the worlds of philosophy, in the universe of intellect, man must be a worker. He is nothing, he can be nothing, he can achieve nothing, fulfil nothing, without working. Not only can he gain no lofty improvement without this; but without it he can gain no tolerable happiness.

What is there glorious in the world, that is not the product of labor, either of the body or of the mind? What is history, but its record? What are the treasures of genius and art, but its work? What are cultivated fields, but its toil? The busy marts, the rising cities, the enriched empires of the world; what are they but the great treasure-houses of labor? The pyramids of Egypt, the castles and towers and temples of Europe, the buried cities of Mexico; what are they but tracks, all round the world, of the mighty footsteps of labor? Antiquity had not been without it. Without it, there were no memory of the past; without it, there were no hope for the future.

Let then labor, the world’s great ordinance, take its proper place in the world. Honor, I say, be paid wherever it is due.

Honor to the worker; to the toiler; to him who produces, and not alone consumes; to him who puts forth his hand to add to the treasure-heap of human comforts, and not alone to take away! Honor to him who goes forth amidst the struggling elements to fight his battle, and shrinks not, with cowardly effeminacy, behind pillows of ease! Honor to the strong muscle and the manly nerve, and the resolute and brave heart! Honor to the sweaty brow and the toiling brain! Honor to the great and beautiful offices of humanity: to manhood’s toil and woman’s task; to parental industry, to maternal watching and weariness; to teaching wisdom and patient learning; to the brow of care that presides over the state, and to many-handed labor that toils in the workshops and fields, beneath its sacred and guardian sway!