“Dr. Johnson and His Father”
From 30 More Famous Stories Retold, 1905
By James Baldwin

It is in a little bookshop in the city of Lichfield, England. The floor has just been swept and the shutter taken down from the one small window. The hour is early, and customers have not yet begun to drop in. Out of doors the rain is falling.

At a small table near the door, a feeble, whitehaired old man is making up some packages of books. As he arranges them in a large basket, he stops now and then as though disturbed by pain. He puts his hand to his side; he coughs in a most distressing way; then he sits down and rests himself, leaning his elbows upon the table.

In the farther corner of the room there is a young man busily reading from a large book that is spread open before him. He is a very odd-looking fellow, perhaps eighteen years of age, but you would take him to be older. He is large and awkward, with a great round face, scarred and marked by a strange disease. His eyesight must be poor, for, as he reads, he bends down until his face is quite near the printed page.

But Samuel makes no reply. He is so deeply interested in his book that he does not hear. The old man rests himself a little longer and then finishes tying his packages. He lifts the heavy basket and sets it on the table. The exertion brings on another fit of coughing; and when it is over he calls for the third time, “Samuel!”

“What is it, father?” This time the call is heard.

“You know, Samuel,” he says, “that to-morrow is market day at Uttoxeter, and our stall must be attended to. Some of our friends will be there to look at the new books which they expect me to bring. One of us must go down on the stage this morning and get everything in readiness. But I hardly feel able for the journey. My cough troubles me quite a little, and you see that it is raining very hard.”

“Yes, father; I am sorry,” answers Samuel; and his face is again bent over the book.

“I thought perhaps you would go down to the market, and that I might stay here at the shop,” says his father. But Samuel does not hear. He is deep in the study of some Latin classic.

The old man goes to the door and looks out. The rain is still falling. He shivers, and buttons his coat.

It is a twenty-mile ride to Uttoxeter. In five minutes the stage will pass the door.

“Samuel, will you not go down to the market for me this time?”

The old man is putting on his great coat

He is reaching for his hat.

The basket is on his arm.

He casts a beseeching glance at his son, hoping that he will relent at the last moment.

“Here comes the coach, Samuel;” and the old man is choked by another fit of coughing.

Whether Samuel hears or not, I do not know. He is still reading, and he makes no sign nor motion.

The stage comes rattling down the street.

The old man with his basket of books staggers out of the door. The stage halts for a moment while he climbs inside. Then the driver swings his whip, and all are away.

Samuel, in the shop, still bends over his book.

Out of doors the rain is falling.

Just fifty years have passed, and again it is market day at Uttoxeter.

The rain is falling in the streets. The people who have wares to sell huddle under the eaves and in the stalls and booths that have roofs above them.

A chaise from Lichfield pulls up at the entrance to the market square.

An old man alights. One would guess him to be seventy years of age. He is large and not wellshaped. His face is seamed and scarred, and he makes strange grimaces as he clambers out of the chaise. He wheezes and puffs as though afflicted with asthma. He walks with the aid of a heavy stick.

With slow but ponderous strides he enters the market place and looks around. He seems not to know that the rain is falling.

He looks at the little stalls ranged along the walls of the market place. Some have roofs over them and are the centers of noisy trade. Others have fallen into disuse and are empty.

The stranger halts before one of the latter. “Yes, this is it,” he says. He has a strange habit of talking aloud to himself. “I remember it well. It was here that my father, on certain market days, sold books to the clergy of the county. The good men came from every parish to see his wares and to hear him describe their contents.”

He turns abruptly around. “Yes, this is the place,” he repeats.

He stands quite still and upright, directly in front of the little old stall. He takes off his hat and holds it beneath his arm. His great walking stick has fallen into the gutter. He bows his head and clasps his hands. He does not seem to know that the rain is falling.

The clock in the tower above the market strikes eleven. The passers-by stop and gaze at the stranger. The market people peer at him from their booths and stalls. Some laugh as the rain runs in streams down his scarred old cheeks. Rain is it? Or can it be tears?

Boys hoot at him. Some of the ruder ones even hint at throwing mud; but a sense of shame withholds them from the act.

“He is a poor lunatic. Let him alone,” say the more compassionate.

The rain falls upon his bare head and his broad shoulders. He is drenched and chilled. But he stands motionless and silent, looking neither to the right nor to the left.

“Who is that old fool?” asks a thoughtless young man who chances to be passing.

“Do you ask who he is?” answers a gentleman from London. “Why, he is Dr. Samuel Johnson, the most famous man in England. It was he who wrote Rasselas and the Lives of the Poets and Irene and many another work which all men are praising. It was he who made the great English Dictionary, the most wonderful book of our times. In London, the noblest lords and ladies take pleasure in doing him honor. He is the literary lion of England.”

“Then why does he come to Uttoxeter and stand thus in the pouring rain?”

“I cannot tell you; but doubtless he has reasons for doing so;” and the gentleman passes on.

At length there is a lull in the storm. The birds are chirping among the housetops. The people wonder if the rain is over, and venture out into the slippery street. 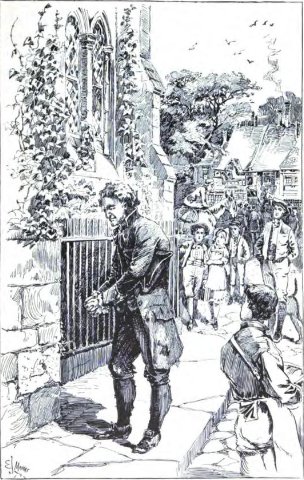 The clock in the tower above the market strikes twelve. The renowned stranger has stood a whole hour motionless in the market place. And again the rain is falling.

Slowly now he returns his hat to his head. He finds his walking stick where it had fallen. He lifts his eyes reverently for a moment, and then, with a lordly, lumbering motion, walks down the street to meet the chaise which is ready to return to Lichfield.

We follow him through the pattering rain to his native town.

“Why, Dr. Johnson!” exclaims his hostess; “we have missed you all day. And you are so wet and chilled! Where have you been? ”

“Madam,” says the great man, “fifty years ago, this very day, I tacitly refused to oblige or obey my father. The thought of the pain which I must have caused him has haunted me ever since. To do away the sin of that hour, I this morning went in a chaise to Uttoxeter and did do penance publicly before the stall which my father had formerly used.”

The great man bows his head upon his hands and sobs.

Out of doors the rain is falling.

As William Bennett said of this story, “an opportunity for love and duty brushed aside in childhood can live as a deep regret long into adulthood.” Today is Father’s Day in the US. If your father is alive, have you given him a call or written him a letter? Don’t let opportunities pass you by.