During a season of intense stress in history, Carwood Lipton, an elite World War II paratrooper from the Band of Brothers, provides a prime example of someone who held things together.

On a wintery evening in Belgium’s Bois Jacques woods, Sergeant Carwood Lipton slipped through the twilight from foxhole to foxhole, encouraging the soldiers in his care.

It was January 12, 1945. The men of Easy Company, 506 PIR, 101 Airborne, had been tasked with holding the line in the most difficult situation imaginable. With thinned ranks, those who were still alive waited for the order to liberate the town of Foy the next day. But they’d already reached the breaking point.

For weeks they’d been shellacked by enemy artillery and machine gun fire. Two days earlier they’d lost Sergeant Muck and Private Penkala when a shell landed directly on their foxhole. A week prior, Sergeants Toye and Guarnere had each lost a leg in an intense attack. Those were only the latest losses in the company’s third major campaign since D-Day.

At the first foxhole, Lipton crouched low and discovered a soldier sitting in the snow, massaging his foot, trying to keep blood flowing so it wouldn’t freeze. Lipton lit a match and checked the foot’s color. Waxy yellow and mottled. Not good, but okay for now.

The man’s boots had been sent out for repair when the company had last been on reserve in Mourmelon. But new orders had arrived before the boots were finished. Hitler was launching a massive last-ditch offensive, later known as the Battle of the Bulge. So the men of the 101st had rushed toward the town of Bastogne to join the defense. The soldier had no choice but to wrap burlap bags around his feet for the fight. Lipton brushed snow from the man’s shoulder and moved on.

At the next foxhole, Lipton arrived just as two soldiers were spooning up mouthfuls of thin bean soup from their canteen cups. The soup was cold. Maggots wriggled at the bottom. Food was always in short supply on the line. Lipton grinned and remarked that the additional protein would help keep them strong. They chuckled and offered him the last wormy bite.

At the next foxhole, Lipton found three soldiers muttering among themselves about a new replacement officer. Lieutenant Norman Dike had little frontline combat experience, yet he’d been ordered to lead the company. Whenever shelling started, Dike disappeared.

Lipton challenged the men to imagine themselves in Dike’s shoes and see what a hard job the new lieutenant faced. Besides, they had no choice but to keep going under Dike’s command. Complaining wouldn’t help.

That was only one evening out of many. Fortunately, Lipton survived the attack on Foy and the Battle of the Bulge and went on to live a full life, dying in 2001 at age 81.

In 2009, while working on a book about the Band of Brothers, I interviewed several veterans who’d fought with Lipton. They said Lipton’s dependability and positive outlook helped keep hope alive. I interviewed Lipton’s son, Mike, who described his father as a fortress of stability and peace. I poured through unpublished journals that Lipton had written about his wartime years, which only confirmed what I heard.

Lipton had indeed encountered great difficulties as a leader, yet his life was marked by an ability to stay positive and encouraging. His example can inspire us today, as this past year has borne witness to much discouragement and loss for so many. In any weighted and weary season, it’s tempting to act out, complain, or succumb to dismay. Yet the people who remain steady — either by personality or choice — find themselves a welcomed refuge for others.

In the spirit of Carwood Lipton, these leaders slip from foxhole to foxhole within their sphere of influence, always encouraging people as they go. They listen and help keep people focused. They point people toward empathy and work to become peacemakers. They refuse to heap up criticisms by adding their own. They focus on solutions and help people walk through hard times with dignity and strength.

Toward the end of WWII, in the cross-river fight at the city of Haguenau, Lipton was wounded in his neck and cheek by a mortar shell. He hiked to the aid station to get patched up then rejoined his unit the same day. Captain Dick Winters (who’d soon be a major) awarded Lipton a battlefield commission to second lieutenant.

This commission — and the steadfastness of character it recognized — came to define much of Lipton’s life, although he never seemed to see the greatness of his own assets. A scene in the HBO miniseries Band of Brothers reflects the strong cool-headed humility that Lipton had exhibited in real life. 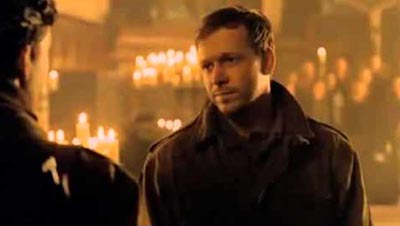 During the battle of Foy, the capable Lieutenant Ron Speirs had been ordered to remove the ineffectual Lieutenant Dike from command and take over as the new company commander of Easy. The miniseries shows Lipton talking with Speirs afterward about the change of leadership.

“These men are glad to have you as our C.O.,” Lipton said. “They’re happy to have a good leader again.”

“From what I’ve heard, they’ve always had one,” Speirs answered. “There’s always been one man they could count on. He led them into the Bois Jacques. Held them together while they had the crap shelled out of them. Every day he kept their spirits up, kept the men focused, and gave them direction — all the things a good leader does.” Spiers paused, looked at Lipton, and added, “You don’t have any idea who I’m talking about, do you?”

“No sir.” Lipton shook his head.

Marcus Brotherton has written four books about the Band of Brothers: Shifty’s War, A Company of Heroes, We Who Are Alive & Remain, and Call of Duty with Lt. Buck Compton. His newest book, Blaze of Light, is the biography of Medal of Honor recipient Gary Beikirch.