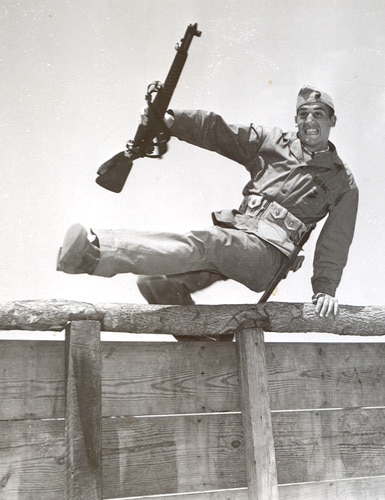 You and your friends are standing in a long recruiting line along with every other able-bodied young man in your hometown, and you’ve got a huge goal ahead of you—you want your family and all those you love to be free.

So you sign up for the Marines, arguably the roughest, most savage group of the military.

Boot Camp is normally 12 weeks, but after Pearl Harbor everything is intensified into 6 weeks of hard training. They send you by train to South Carolina, to the Marine Corps base at Parris Island. You don’t know exactly what to expect at boot camp, other than your life will become hell.

Do you have what it takes?

I recently completed a new book called Voices of the Pacific, along with coauthor Adam Makos. We talked to WWII Marines who fought in the Pacific and asked them what it was like. Following boot camp, these same men went on to battle the enemy on Guadalcanal, Cape Gloucester, Peleliu, and Okinawa and returned home triumphant after V-J Day. But before they did remarkable things, first came hard training.

Listen now to these living legends talk about the first part of their journey. You and I won’t go through exactly what they did (although boot camp for the Marines remains the same tough crucible it’s always been!), but the lessons learned in a season of intense training can be applied to overcoming difficult experiences and achieving goals no matter the era.

According to these men, the biggest tips for successfully completing boot camp are as follows:

Sterling Mace encountered instant culture shock in boot camp—partly physical, partly mental. Immediately after coming through the front gate, Mace had his head shaved. The next morning he was woken up at 4 a.m. for a 5-mile run. Then it was over to the mess hall where “none of the food tasted like it did at home,” he said.

Right away, “we trained how to handle tear gas, both with our mask on and without,” Mace said. “We went over to the pool and swam 50 yards with our hands behind our back. Then we had the obstacle course—climb this, do that—which you don’t do in combat, but it’s all to get you in shape.”

Life lesson for today: Accomplishing your goal will require your current situation to change, and it won’t be easy. In fact, it shouldn’t be easy, otherwise everybody would do it.

He remembers arriving dressed in civilian clothes, and having a group of trainees who’d arrived before him yell, “You’ll be sorr-ee!” as he walked in the front gate. It meant you’d be sorry that you ever joined the outfit, Phillips explained.

Within the first few hours of arriving, he was sorry indeed. He arrived in wintertime and it was cold. The recruits weren’t allowed to wear warm clothes, only khaki pants and a sweatshirt. If a man complained about being cold, then that only brought about more pushups or running.

“There wasn’t anything you could do except endure it,” Phillips said. “Parris Island was rough, and still is, and should be. I’m glad it was. It teaches discipline to young men, and you need that to survive.”

Life lesson for today: When training for your goal, don’t grumble, whine, or find fault. Enduring the difficulty will produce strength, and you will need that in the days ahead.

3. Never fight the man who trains you.

On the first day of boot camp at Parris Island, the new recruits were told to come to the assembly area wearing pants, shoes, and a sweater only. But Dan Lawler remembers another new recruit standing in formation defiantly wearing a huge overcoat.

Rumor had it that the other recruit was the leader of a New York City gang. He brought two young henchmen with him, and all three of them showed the rest of the recruits pistols they wore.

When the drill instructor came to the kid with the overcoat he reached down, grabbed the kid’s pistol, and held it to the kid’s head.

“If you weren’t holding my pistol right now, I’d kick the shit out of you,” said the kid.

The DI threw the pistol to one side. “Come on and try.”

The gang leader toke a poke at the DI, but the kid swung wide.

When the DI got through with him, the kid bled for two days.

“That’s what the Marine Corps did,” Lawler said. “They broke you down so they could build you back up. They knew what it was going to be like once you got into combat. It paid off, that’s what I say. All that training. It paid off.”

Life lesson for today: Approach your training with humility, a willingness to follow directives, and an immediate respect for your leaders. One day when you’re in charge, you can do things your way. Until then, do things their way.

Before breakfast, one of the first days, the men ran through an obstacle course. The first time Bender went through, he went as fast and hard as he could and came in third. He stood around at the finish line with his chest puffed out, expecting to be congratulated.

The DI took one look at Bender and grunted, “Do it again.”

What Bender learned was that, “if you got time on your hands, you better not stand around feeling good about your accomplishments.”

The next time Bender ran the obstacle course, he came in tenth.

Life lesson for today: Beware of entering any new season of life with an attitude of superiority. If you quickly do well, don’t seek reward. Pace yourself and rise to the top at an appropriate time, when it won’t be considered brash.

Chuck Tatum explained the slang term “grab-ass.” It’s when you “goof off when you’re supposed to be working,” and it tends to happen whenever “a bunch of young guys get together and there’s no radio, TV, or newspapers around—they make their own fun.” For instance, suppose you’re in line and you poke the guy in front of you so he jumps—that’s a grab-ass thing.

One time Tatum was at the rifle range. The recruits all wore pith helmets. While standing in line, one guy took off his pith helmet and lightly hit his buddy over the head with it. The force drove the helmet down so the inner band scrunched the guy’s ears. The second guy turned around, took his helmet off, and smacked the first guy back.

The DI saw it, brought the two guys out, stood them an arm’s length apart, and ordered them to take turns hitting each other over the head. The two recruits smashed their helmets over each other until their helmets were wrecked and their heads were sore. They needed to go buy new helmets.

“This was extremely funny.” Tatum cleared his throat. “As long as it didn’t happen to you.”

Life lesson for today: Discern when to use humor on the job. Even if you’re just standing in line, apply yourself to the task and maintain your focus.

James Young went through boot camp when the weather was warmer. One Sunday afternoon during a lull in training, Young was sitting on the barracks steps. He noticed another Marine walk by eating ice cream. Young asked him where he got it. He pointed across the drill field to the PX.

Young got a pint of ice cream, came back, and began to eat it. Just then his drill sergeant came out of the barracks.

“Private Young,” the DI said, “that looks real good, can I have a bite?”

“Yes sir,” Young said, and handed him the ice cream.

The DI took a large bite and said, “Wow, that’s really good. Take off your hat.”

Young did. The DI upended the carton, set it with a splat on Young’s head, and mashed Young’s hat down hard on top.

“Don’t move until it’s all melted,” the DI said.

By this time, all the guys in the barracks were laughing. The sergeant informed Young that permission had not been granted to go anywhere, even if it was Sunday afternoon and they weren’t training.

Life lesson for today: The expectations of a particular subculture are often not clearly communicated at first or may appear arbitrary. Nevertheless, your job is to learn a subculture’s specific practices so you can function within it.

7. Respect the leader with the low voice.

Before R.V. Burgin went to boot camp, he worked at the docks and had a supervisor who’d “holler and yell and cuss you out, call you names. If you wanted your job, you’d take the abuse. If not, there were ten other men who’d want your job.”

When Burgin was in boot camp, he had two drill instructors. “You knew not to mess with these guys,” Burgin said. “One of the guys, if he ever chewed you out, he’d never holler or yell, but he’d get right in your face, and speak with this real intense low voice. I though, boy, that’s real effective.”

Later in life Burgin worked as a post office supervisor and successfully applied the leadership techniques to his job there.

“To lead men,” Burgin said, “you don’t need to holler and yell and cuss.”

Life lesson for today: True respect is earned, not demanded. If you find a mentor who keeps his cool, learn all you can from him. Watch how he speaks under pressure—confidently, directly, and to the point.

If you’re going through a season of intense training right now, it helps to remember that boot camp is a season of metamorphosis. You enter one way, then exit another. What result do you hope ultimately happens? Keep that end goal always in mind.

For Clint Watters, “Boot Camp was rough, sure. You had a lot of running, a lot of exercise, a lot of work. They get you in shape, no question about it. They start by tearing you down and making you feel like nothing. But then they build you back up.”

What was the real reason the men were there?

“They wanted me to emerge as a Marine,” Watters said. “We were going to war, and we needed to be ready to fight hard.”

Marcus Brotherton is a regular contributor to Art of Manliness.

Read his blog, Men Who Lead Well, at: www.marcusbrotherton.com