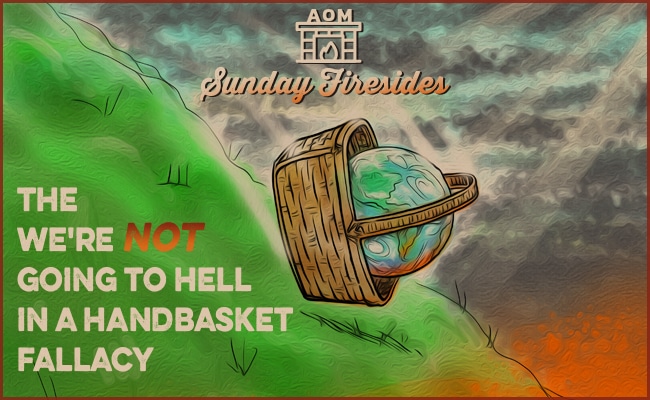 Whenever someone says something like “____ aspect of modern society is worse than it’s ever been,” someone else will invariably jump in with: “Please. People have always wrung their hands about that. Even the ancient Greeks complained about societal decline and ‘kids today.’”

Person B offers their counter with a “case closed” finality, and it does indeed have the effect of shutting down a discussion. But it doesn’t prove what they think it does.

The following hypothetical can help explain why: Imagine that in 1722, the earth entered an ice age. The average wintertime temperature, which had been 50°, begins to fall by one-twenty-fifth of a degree each year.

In 1822, the average winter temperature is 46°, and someone writes in their journal: “Gee, the weather feels colder than it used to.”

In 1922, the average temperature is 42°, and someone finds himself thinking: “I sure don’t remember winters being this cold.”

In 2022, the average temperature is 38°, and someone exclaims: “Winter seems colder than ever!”

At this point, someone else comes along and retorts: “Eh, people have been saying that for centuries!”

This statement would be absolutely correct . . . and yet wouldn’t negate the fact that the temperature had gotten colder.

That people have been worried about something for a long time doesn’t necessarily mean it isn’t getting worse.

It can assuredly be hard to tell whether society is going downhill in things like collective morality or the strength of its youth; measuring such phenomena is a lot more subjective than tracking temperature data, and we can be too pessimistic in our perspective. But it’s a question at least worth considering, instead of dismissing outright. Because if there is a change happening in our cultural climate, we have to consider how we might address it, rather than ignoring the potentially chilling consequences to come.