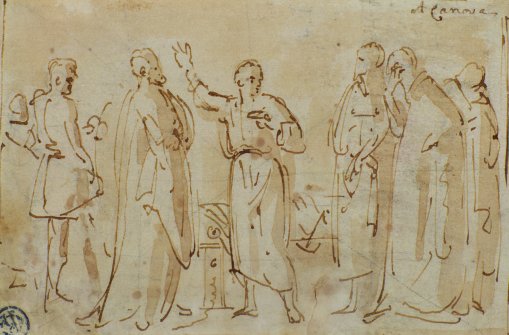 I hope you’ve enjoyed our series on classical rhetoric. Today, for our final entry in the series, we will be discussing logical fallacies. This is a pretty important topic. Much of our debating has moved out of the public square and onto the internet. And if you spend anytime reading those online debates, you’ve probably seen how debased from the principles of classical rhetoric many of them are. Commenter X sets forth a fiery opinion on an article. Commenter Y responds by calling Commenter X a Giant Poopie Head for holding said opinion. And Commenter Z joins in with a tirade on a point that is not even argued in the piece.

For true civil and effective debate to take place, citizens must understand not only how to argue, but how not to argue as well. Every man should know how to avoid the pitfalls and traps of faulty arguing and how to recognize fallacies in the rhetoric of others as well.

According to Aristotle in his treatise, The Art of Rhetoric, a speaker or writer has three ways to persuade his audience: ethos (appeal to the speaker’s character), pathos (appeal to emotion), and logos (appeal to logic). Aristotle believed that out of the three means of persuasion, logos was superior and that ideally all arguments should be won or lost on reason alone.

The problem with using logos as your sole means of persuasion is that it’s fraught with many opportunities for you to mess up and make errors in reasoning. These errors are called logical fallacies.

Aristotle was a big fan of formal syllogisms. In fact, he wrote a whole treatise on them. There’s a reason why he liked them so much. Syllogisms are a powerful rhetorical tool. It’s hard to manipulate and argue against a formally laid out, sound syllogism.

At first blush, it looks like a decent argument. But read it carefully. Just because Socrates is mortal, doesn’t necessarily mean he’s a man. He could be a squirrel for all we know. This right here is an example of the fallacy of the undistributed middle. Let’s take a look at a couple of other formal syllogistic fallacies.

Affirmative conclusion from a negative premise:

No cats are dogs.
No dogs can purr.
Therefore all cats can purr.

Just because there aren’t any dogs that can purr doesn’t necessarily mean all cats can purr.

It’s impossible for a negative conclusion to be reached with affirmative premises. 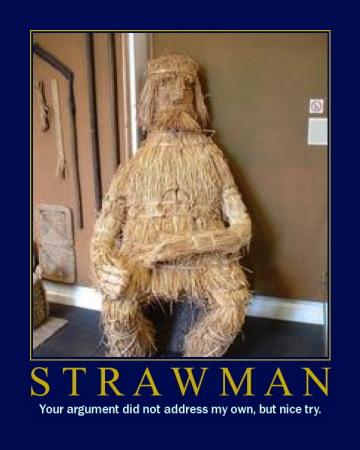 Slippery slopes occur when a person asserts that a relatively small step will lead to a chain of events that result in a drastic change. Example: “If we legalize same sex marriage, what will stop us from legalizing marriage between humans and robots? Or humans and animals?”

Fallacy that occurs when a person only uses data that confirms a particular position, while ignoring a significant portion of related cases that contradict that position. For example, a person might argue that a vegan diet prevents cancer while ignoring cases of cultures that eat only meat and have very low cancer rates.

Fallacy that occurs when the conclusion of an argument is assumed in one of the premises. It’s also often called circular reasoning. If one’s premises entail one’s conclusion, and one’s premises are questionable, one is said to beg the question.

Here’s one of my favorite webcomics, Dinosaur Comics explaining begging the question: 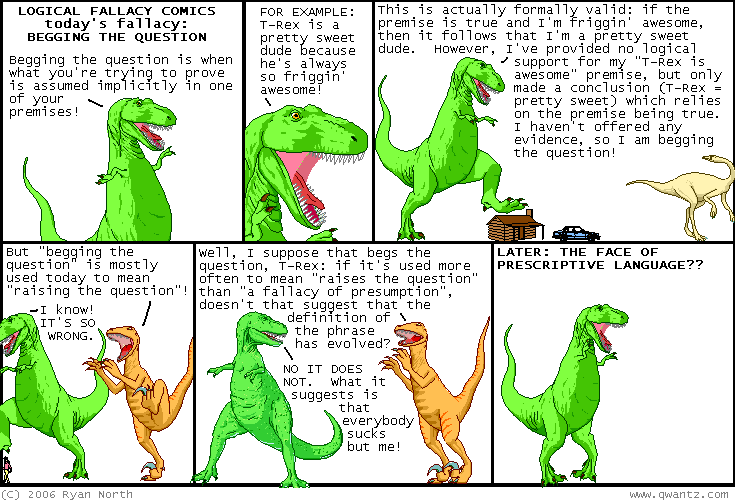 Latin for “after this, therefore because of this.” A fallacy that occurs when someone reaches a conclusion of causation because an event followed another event. Example: “It started to rain after my ice cream cone fell on the ground. Therefore, my ice cream falling on the ground caused it to rain.”

A fallacy that occurs when two conclusions are held to be the only possible options, when in fact there are other options. Example: Senator A: “We either have to cut education spending or else we’ll have a huge deficit this fiscal year.” Senator B: “Hmmm…there are other options. You could raise taxes or even cut spending in other programs and agencies.”

I’d love to read what informal fallacies are your favorites to point out. Share them with us in the comments.

Reading through that list of informal fallacies, you likely stopped a few times, and thought, “Wait, but isn’t that a persuasive argument? Shouldn’t we appeal to experts, to tradition? Isn’t a slippery slope possible? Shouldn’t the character of the messenger have something to do with whether their message is believable?”

One must remember that that while sometimes they can be one and the same, there can be a difference between an argument that is logical and one that is simply persuasive.

And sometimes it’s okay to use the latter.

What the what? Only a cad would purposely use informal fallacies in an argument, right? Well, yes and no. It’s important to remember that rhetoric is fundamentally about persuasion, and not only about crafting arguments that are perfectly logical. If we weren’t allowed to use informal fallacies in our rhetoric than two of the three means of persuasion would be off limits–ethos (appeal to the speaker’s character) and pathos (appeal to emotions). Both are informal logical fallacies.

It does create an ethical dilemma for a rhetorician. Should one eschew appeals to emotion or character because they’re not strictly logical? While using only logic and sound reasoning may seem like taking the high road, a rhetorician risks being ignored and never getting an important message to the masses. Some of the greatest speeches in history were based on both logic and emotion. Going back to the example of propaganda posters during WWII…the government needed to fund the war effort quickly and effectively; simply appealing to logic wouldn’t have accomplished what was necessary. Instead, appealing to Americans’ sense of duty, patriotism, and worry for their loved ones motivated citizens to action. Used for honorable purposes, appeals to ethos and pathos can move people to do great things. And of course in the wrong hands, they can persuade people to do evil. That’s why it’s important to have an informed and intelligent citizenry that is able to evaluate the claims and appeals made by leaders and pundits, allowing themselves to be caught up in emotion when the cause is sound, and cutting through the illusion when it is not.

Everyone is going to have a different answer as to whether or not using informal fallacies is justified. I think the key is to find a balance. Use appeals to emotion or character, but always have some actual facts and sound reasoning to back up those appeals.

Well, that does it for this series on classical rhetoric. We plan on putting the posts together into an ebook for those who are interested in having all the posts in one place. Although such projects always seem to take us forever to finish, since they’re often placed on a distant burner on the large AoM oven.

I’ll leave you with a list of resources that were helpful to me in researching this series and can help you continue your study of classical rhetoric.