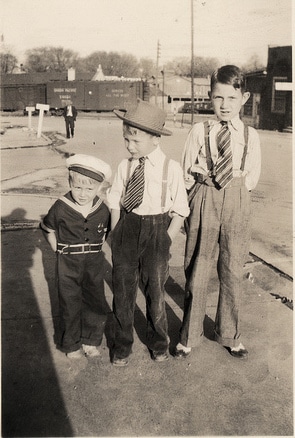 This is the second part of a series on the archetypes of mature masculinity based on the book King, Magician, Warrior, Lover by Robert Moore and Douglas Gillette. If you haven’t already, I highly recommend reading the introduction to the series first. Also, keep in mind that these posts are a little more esoteric than our normal fare, and are meant to be contemplated and thoughtfully reflected upon.

To understand the four archetypes of mature masculinity, we first need to explore their precursors. There are four boyhood archetypes which develop into the manly archetypes. Properly accessing and harnessing their energies is essential for a boy’s full development. These archetypes instill in boys a sense of wonder, play, and energy–traits that are essential for learning and development.

While Moore and other Jungians would encourage men to stay in touch with their boyhood archetypes, they’d argue that we shouldn’t do so at the expense of developing the mature masculine within us. According to Moore, one of the biggest problems facing men in the West is that most men are still ruled by boyhood archetypes and haven’t moved on to harnessing the mature masculine. As a result, we have a society of men who act and think like teenagers. They are, as Moore puts it, “boys pretending to be men.”

Exploring the boyhood archetypes is useful for two reasons. First, it’s a reminder that we should never lose touch with the energetic boyishness that resides in each of us. Accessing that boyish enthusiasm makes life enjoyable and allows us to relate to our sons or other boys we might be in charge of. Second, exploring the boyhood archetypes, particularly their bipolar shadows, will make us aware of any childish thought patterns we are still falling into, patterns which may be stunting our growth into mature manhood.

Today will we discuss two of the boyhood archetypes. And next time we will explore the other two. 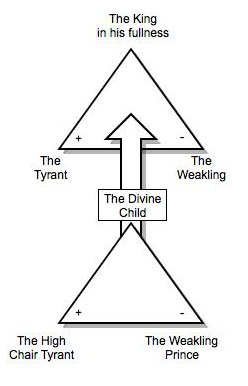 The Divine Child is in many ways both helpless and all-powerful. Helpless because he’s still a child and depends on adults to meet his needs, and all-powerful because he consumes the attention of those around him. The attention that he garners is mutually beneficial: the Divine Child gets his need for attention met, while uplifting and inspiring others. If you’re a parent watching your child accomplish some milestone, you’ll understand this dynamic.

We see the archetype of the Divine Child reflected in various faith traditions and myths from around the world–the most prominent being the Christmas story. Christ is an archetypal Divine Child. His father is God. He comes to the world as a helpless babe, yet people look to him with awe and hope of a new beginning. He brings peace and order to the earth.

Similar stories exist in other cultures. The birth stories of figures like Zoroaster, Moses, Buddha, and Krishna feature miraculous or mystical events that foretold the great work they had to do upon the earth. These special babies had enormous potential, yet they were as vulnerable as any infants are. 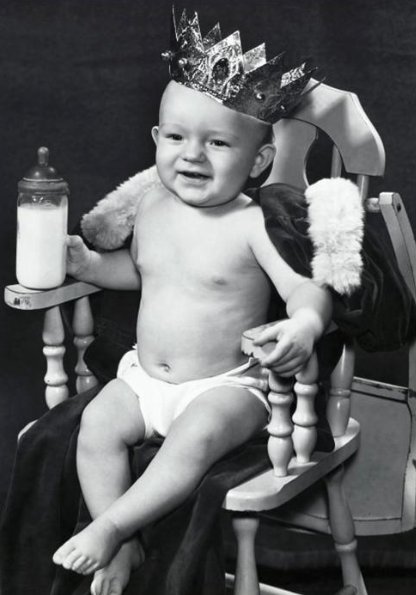 The Shadows of the Divine Child

Remember that every archetype has its bi-polar shadow split. These two shadows are the result of the archetype not being integrated into a boy/man in a healthy and coherent way. The two shadows of the Divine Child are the High Chair Tyrant and the Weakling Prince.

The High Chair Tyrant. Like the Divine Child, the High Chair Tyrant needs attention. But unlike the Divine Child, the High Chair Tyrant doesn’t give anything back. He doesn’t inspire–he just demands. And even when his needs are met, the care often doesn’t meet his unreasonable expectations, so he throws a tantrum. With Gus moving to solid foods and eating in a high-chair, this archetype is rather poignant for me. He’s hungry, so we give him food, but sometimes after a few bites he’ll start pushing your hand away and whining. And splattering food all over his dad.

The High Chair Tyrant is the embodiment of entitled, arrogant, narcissism. He wants attention, but he doesn’t want to lift a finger to get it. He thinks he deserves it just because.

We see the influence of the High Chair Tyrant archetype not only in boys, but men who have yet to move on to mature masculinity. As an infant, the world, or at least your parents’ lives, revolve around you and your needs. But as a man matures, he must come to realize that he does not actually reside at the center of the universe! Otherwise, he will not shed his infantile narcissism.

A grown man who is still ruled by the High Chair Tyrant sulks when he doesn’t get his way, fails to take responsibility for his actions, and is incapable of taking criticism.  His arrogance can blind him to reality and cause him to stumble. You can see the High Chair Tyrant manifested in celebrities and politicians who believe they are so special that they are not only entitled to indulge in things like infidelity and crookery, but that they won’t get caught either.

We also see the High Chair Tyrant in our lives when we expect nothing but perfection from ourselves and beat ourselves up if we don’t meet those self-imposed and unreasonable expectations. That voice in your head telling you that you aren’t good enough is the little annoying brat of a child inside of you slamming his spoon on the table and screaming. Ignore him.

The Weakling Prince. The Weakling Prince doesn’t throw tantrums like the High Chair Tyrant, but he makes his own kind of demands. He’s got no passion for life, no enthusiasm, and no initiative, and thus must be completely coddled. He plays the victim role superbly; when challenges or problems arise, it’s never the Weakling Prince’s fault, and his parents dutifully swoop in to save him. He’s the hypochondriac kid who always finds something to whine about.

The Weakling Prince archetype can still influence a man into manhood. It usually takes the form of the “Mr. Nice Guy Syndrome.” A man that allows the Weakling Prince archetype to rule in his life is listless and unmotivated. He can’t take the initiative to make his needs known, but gets upset when others don’t meet his expectations. He is the prince of passive aggression.

Accessing the Divine Child as a Man

Integrating the Divine Child into your life as a man ensures that even as you get older, you still remain young at heart; this archetype keeps life feeling fresh,  inspires you with a vision of your possibilities, fuels your creativity, and spurs you to adventure. A man who does not retain some of the Divine Child in him loses sight of his great potential and contents himself with being merely mediocre. Successful integration of the Divine Child archetype involves retaining a remembrance of your godlike possibilities, while at the same time having the humility to realize you’re only human after all. 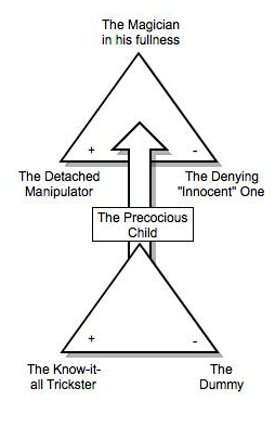 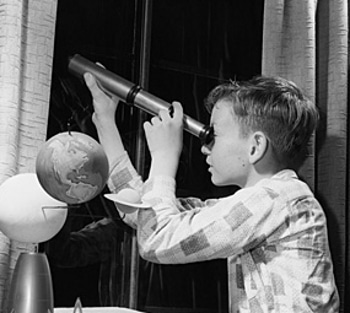 The Precocious Child pushes us to develop our talents and gives us that manly spark to explore and investigate, to find out how the world works and what makes people tick. He ponders life’s mysteries and is reflective and introspective, although not anti-social, for he loves to share what he’s learned with others in hopes of helping them. A man who stays in touch with this boyhood archetype maintains his boyish wonder and curiosity about the world. He refuses to let cynicism rot his insides and jade him from the marvels of life.

The Shadows of the Precocious Child

The Know-It-All Trickster. As the name implies, this immature masculine energy is the place from which mischief in boys (whether innocent or devious) springs. It originates from a boy’s sense of superiority to everyone else–a superiority he feels compelled to prove and show-off in various ways.

The Know-It-All Trickster knows how to charm his way out of trouble. He’s adept at deception and manipulation and will gain the trust of those around him, only to betray it when they least expect it.

The Know-It-All Trickster is also the source of smart assery from young bucks. Boys (and some men, too) who let the Know-It-All Trickster rule their psyche are prone to running their mouth off. This can be a positive thing–the Trickster will point out mistakes and say that the king isn’t wearing any clothes when others are afraid to. But boys under the power of the Know-It-All shadow can be quite smug and enjoy intimidating others with their words.

The Trickster has lost touch with the Divine Child, and thus does not feel that he himself has any degree of greatness. Because his sense of superiority is often not based on anything substantive, he is envious and insecure, and this is manifested in the need to brag, “one-up,” and tear down other people and their ideas. He loves to destroy things, but he does not build himself.

The Trickster is focused on maintaining appearances. Men who grow into adulthood still under the influence of this immature archetype turn into “$40,000 a year millionaires.” They don’t make much money, but they sure spend and act like they do. Again, it’s all an attempt to trick others into thinking the Know-It-All Trickster is better than he really is, and most importantly, that he’s better than others.

Mythology is filled with Trickster figures. Odysseus from Greek lore was known as a “man of many wiles.” His trickery helped him survive his long trip home, but his loud mouth also got him into troubles that made the journey longer. In Native American cultures, the coyote often takes on the role of the Trickster in their myths.

The Dummy. Boys under the influence of the Dummy shadow are seemingly uncoordinated, naive, lacking in boyish vigor, and slow on the uptake. According to Moore, “the Dummy’s ineptitude…is frequently less than honest.” He may actually understand more than he lets on, but plays dumb to deceive those around him and to avoid the risk of striving and failing. In short, the Dummy shadow has a secret Trickster shadow lurking within him. An archetype within an archetype.

Accessing the Precocious Child Archetype as a Man

A man who has successfully integrated the Precocious Child archetype maintains his curiosity about the world and is dedicated to lifelong learning. He allows himself to contemplate the mysteries of life and is always seeking greater knowledge. But he does not use the accumulation of this knowledge to feel superior to others nor to manipulate and deceive them. Instead, he is devoted to sharing his insights as a mentor and teacher.