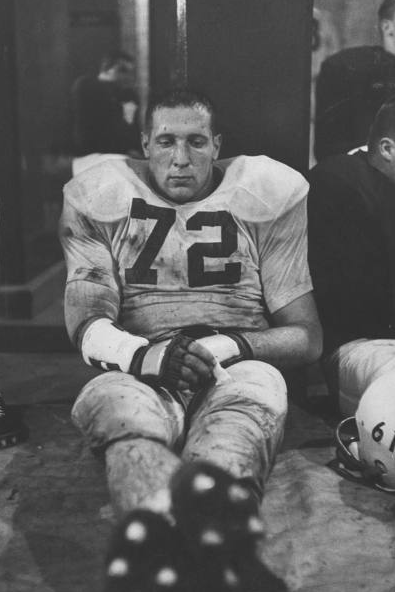 The holiday season is now in full swing. People will be decking the halls, throwing parties, offering tidings of good cheer, and engaging with all things festive.

Though this time of year is supposed to be merry and bright, however, it can also sometimes feel rather melancholy. That’s partly because folks may wish for warm connections and the comforts of home, but find themselves alone and isolated.

But it’s also partly due to the sinking feeling that can arise as the year draws to a close — the realization that if whatever resolutions, expectations, and hopes you started the year with haven’t been accomplished by now, they almost assuredly won’t be by the time the new year is rung in. It can be a recipe for feeling despondent.

Perhaps you not only failed in the goals you set for yourself this year, but you’ve failed in the same goals for several consecutive years now. The prospect of ever changing has started to feel a little hopeless. You might decide to throw in the towel and stop trying altogether.

But that would be a mistake.

Because past failure is no excuse for present inaction.

Erroneous Labels and the Cycle of Failure

Whenever you fail at something, you run the risk of treating it not as an isolated occurrence, but as a sweeping indictment of your ability to ever succeed in that area (or at anything at all). You figure that if you failed once, or numerous times, you might as well give up. You may label yourself a “failure” in general, or as “undisciplined,” “lazy,” “stupid,” “nervous,” “hot-tempered,” or “shy.”

Problem is, these labels become self-fulfilling prophecies. In his book, Conversationally Speaking (which is about communication but also includes insight on viewing your life more rationally), Alan Garner describes how negative labels perpetuate a negative cycle: You say you’re a failure → so you decide you won’t even bother trying → which ensures you don’t succeed → which proves that . . . you’re a failure. Round and round the cycle goes. The same cycle applies to more specific labels you give yourself, like “undisciplined”: 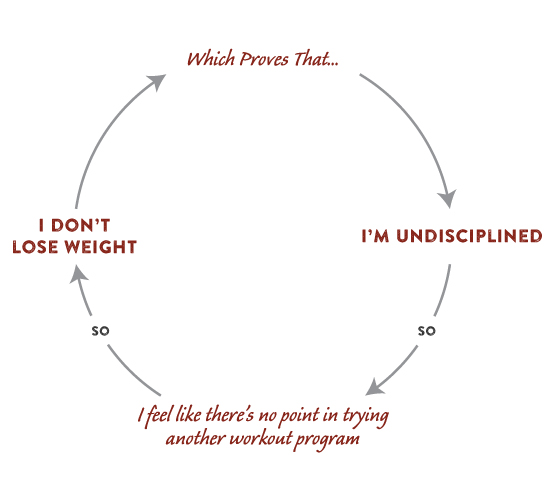 Garner explains the dynamic at work in these loops of self-sabotage:

“All these labels are based upon poor past performance. When you use them, you make past failure an excuse for present inaction. Your present inaction provides you with still more ‘proof’ that those negative self-labels are accurate and with still more justification for future inaction. After playing the part for a while, you may end up concluding, ‘I just can’t help acting the way I do,’ or ‘This is just my nature,’ and then give up trying.”

Break down your label. When you’re feeling despondent over some failure and give yourself a label like “shy” or “undisciplined,” what you’ve typically done is taken your failure in one specific area, and applied it to your whole life. But as Garner points out, “labels are irrational because they wrap up your entire being into one word, making situational problems appear global. They confuse who you are with what you’ve done in one small area of your life.”

Let’s say you have trouble talking to attractive strangers. When you think about approaching a pretty woman, you get super nervous, and then decide to walk away. Having consistently failed in making an approach, you decide that you’re “shy” — that’s just your nature. But are you really shy in every area of your life? You may have no problem talking to friends and family, to customer service people, and to your teachers. Even though you’re actually only shy in one area, you’ve applied that label to your whole life. Which doesn’t make sense: as Garner observes, “how is it reasonable for [someone] to label 100% of himself based upon behavior with 5 percent of the people he sees?” 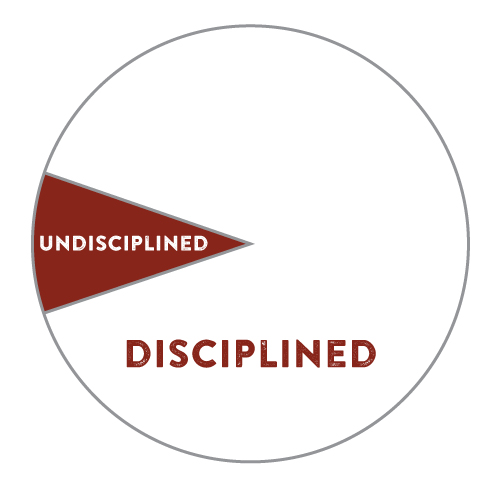 Or let’s say you’ve struggled with making exercise a habit, and consequently label yourself “undisciplined.” But dig into that label some more. Are you really undisciplined in every area of your life? Maybe you struggle with getting to the gym, but you make good grades, or have learned a foreign language or musical instrument, or are 100% loyal to your wife. It’s probably the case that while you may be undisciplined when it comes to exercise, you are disciplined in other things. So why make this one area of failure the defining measure of who you are?

Everybody succeeds in some areas of life and struggles in others. What this tells you is that if you’re able to be successful with one area — even if that’s 10% of your life rather than 95% — you do have the capacity and potential to succeed in another.

Accept failure as part of the process. Failing once, or even multiple times at a goal, doesn’t guarantee you’ll never achieve it. Attaining any goal almost always requires failing at first, and at certain points along the way. It’s become cliché to encourage persistence by citing the many times famous authors/athletes/scientists failed at something before they made it big (e.g., Jack London had 50 manuscripts rejected before one of his pieces was finally accepted for publication in a major magazine), but such snapshots do offer an important look at the hard reality of finding success in this world. As another true cliché would have it: You’ve got to break some eggs to make an omelet.

Now something that’s just as true as all the motivational platitudes out there is the fact that attaining a certain goal may not in fact be possible for you. While developing behavioral habits (working out regularly; stopping smoking; curbing your temper) is possible for everyone, attaining certain professional/creative/athletic aims (writing a bestselling book; starting a successful business; becoming a varsity athlete) isn’t; even after giving it your all, you may simply not have the talent it takes. But before you arrive at that conclusion and throw in the towel, you owe it to yourself to give your best effort, and to try out a few different strategies for going about it. It may not be you that’s the failure, but the approach you’re taking.

Even if you’ve failed at something this year, or for a long time, it doesn’t mean you’ll never succeed with it. Nor do you have to wait until January 1 to again resolve to reach that goal. Start again today.

Past failure is no excuse for present inaction.

Source & inspiration for above diagrams: