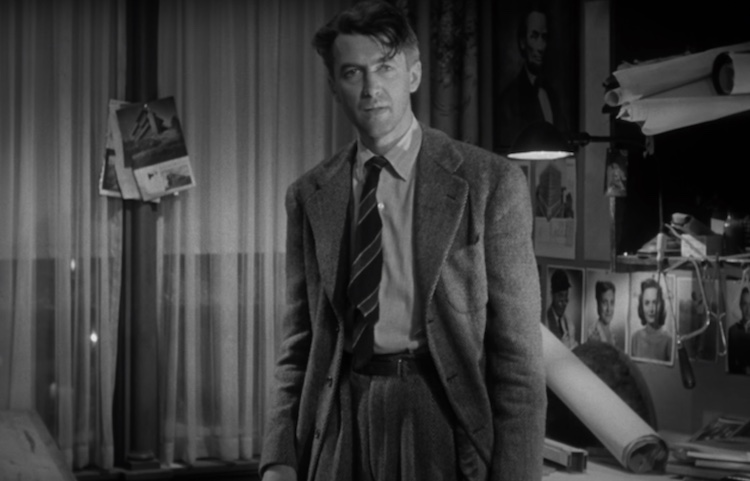 It’s a Wonderful Life is arguably the most classic of classic Christmas movies. What’s not to like? It’s got the talented directing of Frank Capra, the endearing acting of Jimmy Stewart, a compelling plot device that invites viewers to imagine what the world would be like without them, and plenty of feel-good sentiment.

Or, at least, there’s plenty of feel-good sentiment at the end. The other parts of the movie though . . . well I’d long noticed that the bulk of the film actually made me feel rather frustrated and depressed — really, rather sad for George Bailey.

After watching it again recently, I’ve been thinking more about why that is, and have come to the following conclusion: George Bailey is a truly tragic figure — an overly passive man whose sacrifices and sufferings aren’t entirely necessary, even from an ethical and moral standpoint.

When George’s father dies and the board of the Bailey Brothers Building & Loan Association votes to keep it going as long as George will take the reins, his deciding to accept the position — to get things in order, avoid a disruption in services, continue his father’s legacy — is arguably the ethically upstanding thing to do. At least for a time. George makes the very sensible, practically-wise compromise between following his dream of traveling the world and going to college, and not wanting to see the Building & Loan dissolved by Mr. Potter, by striking a deal with his brother, Harry: George will run the association for now, and Harry will go to college; then, after Harry graduates, he’ll come back and take over, and George will go to school.

The decision George makes later on to use his and Mary’s honeymoon savings to cover a bank run is also an ethically generous choice. One can argue that enabling people to own a home, rather than rent — the enabling of what is more of a modern privilege than a basic human need — doesn’t rise to the level of a moral obligation. But, it’s still a thoroughly decent thing to do.

But let’s visit a decision which comes in between these two, and that, had it been done differently, wouldn’t have even put George in the position of having to make that second decision, and to deal with all the other dream-crushing, spirit-suffocating episodes that follow.

When Harry returns from college with a job offer from his new father-in-law to work as a researcher for a glass factory, he says he’s willing to fulfill his and George’s agreement, and take over the Building & Loan as planned, but . . . but . . .

While with the aforementioned dilemmas, there was more moral weight on one side of the equation than the other, that isn’t so in this case. Harry is said to have a genius for research, but George’s own father says he has a talent for architecture. Neither brother has a greater or lesser claim on following their vocational desires. Neither is more or less obligated to give up on the path they wish to pursue.

Perhaps it’s “nice” of George to decide to sacrifice his dream to enable Harry to pursue his, but it seems that he does so less out of moral conviction, than the inability to have a difficult conversation with his brother. George accepts Harry’s implicit dismissal of their deal without even an attempt to talk about it. He’s afraid of confrontation and unable to assert himself.

Better it would have been for George to try to hold Harry to their agreement. If Harry had pushed back, if both brothers steadfastly and understandably did not want to take over the Building & Loan, together they then could have decided on another plan. Maybe George would stay on a year longer, with the agreement that over that time, he and Harry would find a suitable, non-familial replacement willing to run the organization. Maybe he and Harry would decide that while providing affordable loans and housing would add something of value to the world, fulfilling the vocations for which their particular talents were uniquely suited would add value to the world as well, in a different way; maybe they would decide that putting their unique talents to use was itself a moral obligation, and that squandering those talents was in fact the immoral choice to make. They may also have reasoned, quite reasonably, that — even if the film suggests otherwise — the closing of the Bailey Brothers Building & Loan would not have invariably led to the rise of Pottersville.

As Bertrand Russell observed, “One of the symptoms of an approaching nervous breakdown is the belief that one’s work is terribly important.” George makes the mistake of thinking there is such a thing as an indispensable man, a form of pride that inflates one’s centrality in life’s drama, and deprives others of their own agency; in the closing of the Building & Loan, each of the citizens of Bedford Falls — not just George alone — would have had a role and responsibility in shaping the subsequent trajectory of the town.

George could have explored these other lines of thought, but instead forfeits his dreams without a fight. And this decision symbolizes the passive approach he will take with the other decisions in his life as well.

Take his Uncle Billy. George keeps him on at the Building & Loan, despite the fact that Billy, however well-meaning, is incompetent and thoroughly unfit for his job. Again, this can seem like the “nice” thing to do, but is it actually nice to leave someone who’s forgetful, bumbling, and prone to hitting the bottle in charge of the life savings of hundreds of people? Is it nice to give such responsibility to someone whose psyche is so fragile, that if he failed in business, as he does in the alternate reality sequence of the film, he’d end up in an insane asylum? Is it nice to tie one’s personal fate to someone who can end up burdening you with the prospect of prison time and years of separation from your family? Here again, George’s decision to retain Billy seems driven less by a sense of moral obligation, than an inability to have a difficult conversation with his uncle. It’s not as if George would have had to cut off Billy (who, for his own part, seemed rather nonplussed about the prospect of losing his job) with abrupt coldness; he could have told his uncle that he’d keep him on for another year, while asking him to look for another job, and helping him in that search. But the awkwardness of initiating even that sort of plan is something George cannot face.

George is the typical “nice guy” who allows himself to be put upon, who takes responsibility for everyone’s feelings, who doesn’t maintain boundaries — who submits to non-obligatory “shoulds” and then tells himself he’s doing the right thing, when, really, he’s just scared to assert his own needs and desires.

As with every nice guy, while George puts on a willing smile when it comes to the sacrifices he makes, inwardly, he’s seething. A slow-building anger smolders inside him, and, as it always does, this bile eventually bursts forth in terrible, destructive form. When George comes home to his family on Christmas Eve, Uncle Billy having brought about the seeming ruin of their lives, he viscously berates his wife, his kids, and his kid’s teacher. George’s quite real and yet formerly submerged resentments tumble out of him in a cruel, wounding torrent. He acts angry with his family, but he’s really angry with himself, angry that he alone — with his ever-acquiescing approach to life — is to blame for the predicament he now finds himself in.

His niceness doesn’t turn out to be so nice.

In the end, of course, George realizes the good he’s done for his community, and that community steps in to save him from personal catastrophe. The scene in which his friends and family show up to his house to donate money and toast “the richest man in town” are as touching and life-affirming as anything in cinematic history. And yet, what will happen to George once the credits roll?

One night of affirmation will not ultimately make up for the lingering grief of a life marked by significant compromises. Which might be alright if those compromises had been necessary, had been morally obligated. But George might have taken another, equally moral path, one in which he used his unique talents to better the world, took ownership of his life, and, in allowing himself to fully show up as the man he dreamed of becoming, been in fact an even better — less melancholic and resentful, more stable and centered — husband, father, and member of the community.

Make no mistake, the overarching sentiment of It’s a Wonderful Life holds true regardless: it really is your relationships, your friendshsips, which make you rich. The ending of the film is full of truth, and still chokes me up every time. But this sentiment needn’t be paired with the ultimately tragic corollary that maintaining those relationships requires a willingness to always put others’ needs above your own and the unconditional surrender of all your dreams.