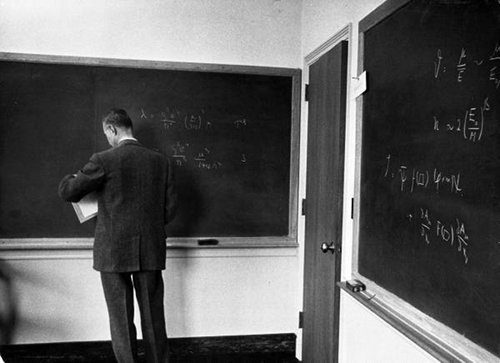 If you’re like many men across the world, you probably set some new goals for yourself on January 1. Maybe it was to work out regularly or get into the reading habit. Or maybe you wanted to pay off your debt or increase your productivity.

Perhaps you did okay for the first week or two, but have already fallen off the goal-achieving wagon. Oh well. There’s always next year, right?

Hold on there, chief. No need to wallow in regret for the awesome life that could have been. There’s still hope for you yet.

To end this month-o-motivation, I set out to do a comprehensive post about all the ways to increase your chances of reaching a goal.

But as I waded into the research, what I found was that 1) summarizing all of the information required more of a book than a blog post, and 2) a lot of the methods didn’t personally strike me as all that helpful.

So instead I decided to cover the one tactic that was new to me, grabbed me the most, and most importantly, has been tested and shown to significantly improve your chances of successfully forming a new habit or reaching a goal.

This method is called “implementation intention,” and it’s a simple and effective way you can prime your brain for goal-achieving success.

What Stops Us from Starting and Achieving Our Goals?

Research has shown that the road to unfulfilled goals is paved with good intentions. By April, 50% of the people who made New Year’s resolutions have failed to keep them. And only half of people (and this number is likely inflated) translate their good intentions–whether made in January or any time–into real action. Interestingly, this is the same percentage of times that the average person is able to resist the four hours of unwanted desires they experience each day. Not too motivating, huh? In school, 50% is an “F.”

So what causes us to stumble on the path to our goals? Psychologist Peter Gollwitzer breaks the common obstacles down into the following categories:

Failing to Get Started with Goal Striving

Sometimes people fail before they even begin, because they have trouble:

Remembering to act. It sounds a little silly to say that people “forget” about their goals, but how often does this happen in our lives? We make it a goal to start reading 30 minutes before going to bed, but that night we start surfing the net, lose track of time, and not only don’t stop 30 minutes before bed, but end up hitting the sack an hour after we had intended to turn out the light.

Seizing the opportune moment to act. An opportunity arises to make good on our intentions and either we fail to recognize the opportunity in front of us, or we see it and don’t know how to grab it. The wife takes the kiddos to see her sister on a Saturday afternoon and you’re left home alone. It’s the perfect time to finish the dining room table you’ve been working on, but you turn on the game instead.

Second thoughts at the critical moment. Gollwitzer calls this “the problem of overcoming initial reluctance.” Here you do realize the opportune moment to fulfill your goal is at hand, you do know what you should do, but at the critical moment you have a difficult time choosing long-term benefits over short-term gratification. For example, let’s say you’ve made it a goal to take the physical side of the relationship slower with the women you date, but you’re kissing your new lady friend on the couch, and she smells so dang good…

Getting Derailed During Goal Striving

Even if you succeed in getting going with your goals, it’s rare that a one-time choice is all it takes to achieve them. Instead, you have to persevere in the goal, without letting these obstacles derail your efforts:

Enticing stimuli. It was easy to make reading a goal in the 19th century–what else were you going to do for fun? Now we’ve got choices coming out the wazoo. Studying every night seems like a good idea…but there are so many cat videos to watch!

Suppressing behavioral responses. This is a fancy of way of saying: “Old habits die hard.”

Negative states. Things like depression, stress, nervousness, and ego depletion sap your motivation to follow through on your good intentions. Simply anticipating a negative state has the same effect–hence, why you’ve thought about going to the doctor for a physical for the last five years and still haven’t made the call.

So those obstacles certainly stack the odds against you. But there is a way to fight back: priming your brain for success by formulating an implementation intention (“II”).

An II is simply a plan in which you link a situational cue with a response that will bring you closer to fulfilling your goal. To do this, all you have to do is reframe your goals as “if-then” statements. The “if” part is the situational cue; the “then” part is your planned response to that cue.

Thus your goal of “working out more” becomes “If it is Monday, Wednesday, or Friday at 7AM, then I will leave for the gym.”

“I want to plan regularly” becomes “If it’s 9PM on Sunday night, then I will make my schedule for the coming week.”

“I want to reduce my caffeine consumption” becomes “When I get a craving for coffee, then I will drink a glass of water.”

“I want to be more patient” becomes “If I feel myself getting angry, then I will take three breaths.”

You’re probably thinking, “There’s no way that something so simple can actually work.” But over a decade of research and nearly a hundred studies have shown that not only are implementation intentions highly effective, they can actually double a person’s likelihood of achieving their goals.

In one such experiment, two groups of students were asked to write essays over their Christmas break about how they spent their Christmas Eve. The essay was due 48 hours after Dec. 24. Researchers gave one group of students a questionnaire requesting that they specify where and when during that 48 hour period they planned on writing the essay. Effectively, they were asking these students to create an implementation intention without them knowing it (“If it’s December 26 at 3PM, then I’m writing my essay at the library”).

The other group wasn’t asked to specify when and where they planned to write their essays. They didn’t create implementation intentions.

How to Form an Effective Implementation Intention

Make sure your goals are clear and strong. No amount of implementation intentions can motivate you towards goals that are vague or that come from “shoulding on yourself.” Your goals must be definite aims that you truly want to go after.

Identify your personal obstacles to starting and sticking with your goals. Is it that you don’t remember to do the goal during the day? Is it that you have second thoughts at the critical moment when you need to follow through?

Now it’s time to formulate an implementation intention that will overcome your obstacles and keep you moving towards your goal:

Create the “If.”  This is the situational cue that will either present an opportunity you need to seize or a temptation you don’t want to succumb to. Gollwitzer notes that “The occasion or critical situation specified in the if-part of the plan could be either an internal cue (e.g., a strong feeling) or an external cue (e.g., a particular place, object, person, or point in time).”

“If I feel jealous of my friend…”

“If an attractive woman catches my eye…”

Create the “Then.” This is the response you will commence once the “If” cue happens. The response is designed to keep you on track towards your goal, and it might involve thinking something, doing something, or ignoring something.

“If I feel jealous of my friend, then I will think about one thing about my own life that I’m grateful for.”

“If an attractive woman catches my eye, then I will try to talk to her.”

If there is more than one obstacle keeping you from a goal, you can make multiple II’s as long as they’re all plausible and don’t conflict with each other.

Make your “if-then” statements as specific as possible. Vague “if-then’s” create room for deliberation and thus the chance you’ll make a decision that torpedoes your goals. Not “If it’s the morning, I will wake up early” but “If it’s 6:00AM Monday-Friday, I will get out of bed.”

Write down your II’s and review them daily. Best to keep them fresh in your mind.

Why does something so simple as formulating “if-then” statements work so well in helping people achieve their goals? There are a few reasons:

Eliminates choices. As we mentioned earlier, competing choices often act as obstacles to focusing on our goals. Implementation intentions effectively remove these choices by giving you a specific plan of action for the decisions you commonly face.

Heightens awareness of obstacles and opportunities. Creating your IIs forces you to brainstorm and plan for the critical situations that will come up along the path to your goal and how you will respond to those situations. This exercise heightens your awareness of the threats and opportunities that arise each day, helping you identify moments when you need to take action.

Automates responses. If you’ve already decided exactly what you’re going to do when a certain situation arises, then you won’t forget to act or miss the opportunity to do so, you won’t have to waste your time deliberating on your course of action, and you’ll be less swayed to choose short-term benefits over long-term ones in the heat of the moment. Basically, your reaction will become almost automatic. And as we learned last week, automating your decisions…

Conserves willpower. By “outsourcing” our decisions to our implementation intentions, we bypass the self-control-fatiguing deliberation process, which conserves our precious willpower–the fuel that helps us achieve our goals.

Are implementation intentions foolproof? Of course not. Our brains are perfectly capable of overriding even the most well-thought out II’s. But they are an incredible tool for tipping the scales in our favor.