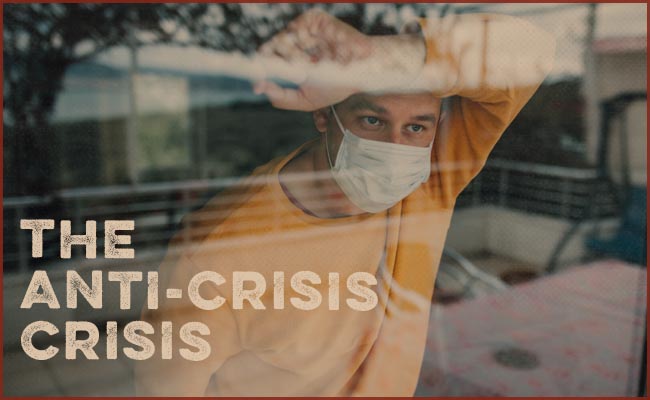 It has long been observed that societies seem to oscillate between periods of peace and plenty, and periods of conflict and hardship.

This idea has been analyzed in detail by researchers like Neil Howe and William Strauss, whose generational theory posits that societies cycle through four 20-year “turnings” — High, Awakening, Unraveling, and Crisis — around every eighty years. During the Crisis period or “Fourth Turning,” a society is faced with a perceived threat to its survival, which typically takes the form of war, but can also arrive in the shape of severe economic distress, natural or man-made disasters, civil revolts, or some combination of these and other catastrophic events.

The scientist Peter Turchin has also argued for a cyclical view of history; in crunching thousands of years of historical data, he found a pattern in which “long spells of equitable prosperity and internal peace are succeeded by protracted periods of inequity, increasing misery, and political instability.” Every fifty years, Turchin postulates, a society experiences one of these crisis periods, which he calls “Ages of Discord.”

Not all of the predictions Strauss and Howe made back in the early 90s have come to pass; and Turchin’s theory has its critics. Still, it is interesting to note that both sets of researchers independently came to similar conclusions using very different methods. It’s interesting to note as well that both Strauss/Howe and Turchin predicted that 2020 would be the year in which our latest crisis period would catalyze, and respectively did so thirty years and a decade back.

The basis for the general idea underlying a cyclical view of history is that periods of ease and prosperity lead to the atrophying of certain qualities on both the micro and macro level — the “sterner” stuff of personal character like discipline, self-sacrifice, and courage, as well as the cultural glue that lends a society unity and cohesion. This decay devolves into decadence, complacency, and stagnation, leaving a people vulnerable to conflict and collapse.

It’s not only that structural and moral deterioration — decades of ignoring problems and kicking cultural and political cans down the road – precipitate an inevitable breakdown, but that in some sense a society feels ready for a crisis, for a more urgent state of affairs. As Howe and Strauss note, “sparks of history—sudden and startling events—can arise in any turning. Some sparks ignite nothing. Some flare briefly and then extinguish,” but “Others ignite epic conflagrations.” This is to say that the triggers of a could-be crisis occur in every period, but only at certain times in the cycle does a potential trigger deepen into a Crisis with a big C, and it does so in part because the societal ecosystem magnifies it.

It is not as if people wish for a crisis, or intentionally bring it about; rather, the societal ecosystem seems to sense it needs a correction, a catharsis, a renewal, which can only come through the process of creative destruction. There’s a seasonality to the cycles of history, where fall and winter must invariably follow spring and summer.

Both Howe and Turchin, and many a common man on the street, would say that we are in a crisis period right now. Yet, it is in many ways a strange anti-crisis crisis, wherein the dynamics of a typical crisis are inverted.

A crisis typically leads to a correction of the less ideal qualities that developed during previous periods of prosperity.

But the current crisis has only exacerbated them.

A crisis typically turns an inward-orientation into outward action, puts an end to atomization with an emphasis on teamwork, unity, and collective effort, and requires the surmounting of complacency and timidity through the exercise of courage — particularly the physical variety, and particularly amongst the younger generations.

And yet generations Y and Z, who already struggled with anxiety and depression, find themselves even more turned back into themselves, in conditions perfectly situated to breed an even deeper state of morbid self-consciousness. Fellow human beings, which already represented an anxiety-inducing metaphorical threat in the possibility of embarrassment and real or perceived ostracisation, have now been overlaid with an actual physical threat in the specter of contamination and illness. Gen Z, which even before the pandemic, got together less often for face-to-face interactions with their peers — out of a preference for the safety and control of communicating digitally — now see each other even less frequently. Feelings of shyness and awkwardness can only be amplifying. We have become even warier about socializing and more isolated than ever.

Despite media and corporate messaging about us all being in this together, without some kind of tangible, collaborative, camaraderie-building action for everyone to pitch in with, and in an atmosphere rife with partisan conflict, we find ourselves far more divided than united.

Generations which were already less comfortable with risk, have, by and large, not been required to face any. While sacrifices have been asked of us, for the vast majority, they do not involve confronting any real danger, nor exercising any courage. One is only asked to do nothing, to stay home, which, though it can be difficult to do in some situations, has sometimes been but a welcome relief, a flattering, ennobling excuse for avoiding an obligation or encounter one wanted to dodge anyway.

The silver lining to the very real, unromantic losses and hardships that inevitably accompany a typical crisis, is that it awakens qualities which were once dormant (as well as creates a degree of excitement and adventure that was previously lacking in a comfortable but boring society). The oscillation restores balance to what had been the increasingly lopsided development of individual and societal character. In the absence of this dynamic in our current conflagration, a thorny question emerges: What would happen if we found ourselves in a crisis which, rather than ameliorating them, only deepened our weaknesses, further atrophying the already moribund muscles of our natures?

Of course, according to Strauss and Howe, our last crisis started with the Great Depression . . . and ended with World War II. So no one can tell where this current crisis (which both Howe and Turchin say won’t end for another decade or so) will lead. But the dynamics of the Great Depression, in the form of things like the Civilian Conservation Corps, actually prepared men for the next phase of the crisis — the war. Will being homebound prepare us for a greater emergency to come? And even if nothing worse is around the corner, what will become of the makeup of those who emerge from something atypical, something potentially unique in history . . . a hard time . . . that didn’t create strong men?