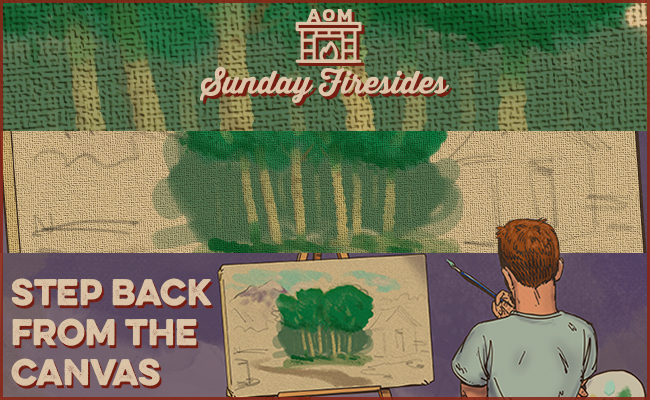 Growing up, did you ever do one of those puzzles where you were shown a hyper-zoomed-in photo of some object or animal and had to guess what it was?

It could be hard to recognize what you were looking at until you flipped to the zoomed-out answer. “Oh, it’s a butterfly.”

Those ultra-close-up photos represent well the perspective we typically have on our own lives, except instead of viewing a blown-up area of a static, already-captured image, we’re focused in on a tiny swath of a picture we’re actively creating. Blinkered by the daily crush of one-thing-after-another urgencies, it’s as if we’re painting a canvas we’re constantly standing but an inch away from.

From this myopic position, it’s difficult to recognize the beauty you’ve already laid down.

We often feel the strongest upwellings of gratitude when we view things from a remove: we appreciate our children in a new way when listening to their teachers describe them; remember how spectacular our spouses are when watching them make conversation with someone else; realize how much our friends mean to us when we’re lying in our beds at night, as they’re lying in theirs.

A perpetually zoomed-in perspective also makes it impossible to plot out where you want life’s painting-in-progress to go. What might have been a veritable masterpiece, ends up as an incongruous jumble of brushstrokes.

From time to time, then, you have to step back from the canvas, and take a look at the bigger picture.

This is a step measured less by physical distance, than contemplative space. It’s taken by carving out quiet moments of reflection where you survey how your life’s coming along. And, in fact, by reading biographies, too; for there’s something about seeing a birds-eye view of someone else’s life, that allows you to adopt this artistically-necessary viewpoint on your own.