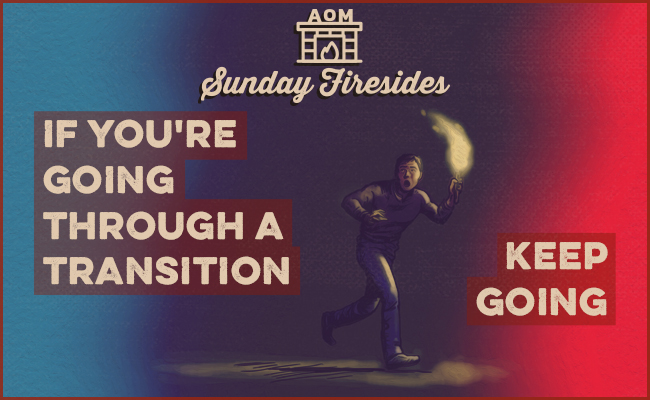 Transitions can be some of the most difficult parts of life.

You’ve stepped beyond the established routines and understood expectations of an old stage in life, but don’t yet feel confident in the altered roles and expectations of a new one. You’d learned to ace the roles and responsibilities of a previous position, but feel like an awkward, bumbling noob in the roles and responsibilities you’ve assumed. You miss the well-worn trails of the comfort zone you left behind, and are far from grasping the contours of the landscape you’ve journeyed into.

At such times, amidst the frustrating in-between, it’s easy to despair. You feel disoriented, discombobulated, weighted with a burden that hangs heavy on a back unaccustomed to the load, and it seems as though you’ll always feel just the way you do right then. You may think you’ve made a mistake. You may lose heart and turn back. You may lie down and refuse to move forward. You may crawl into the nearest seeming shelter.

Yet the tangles of the messy middle deceive you. It will not always be like this. New light, fresh courage, refound footing — self-assurance and satisfactions heretofore unimagined — lie just around the corner, over the next hill, but a few furloughs hence. If only you’ll continue on.

To those going through a transition, the advice applies equally well.