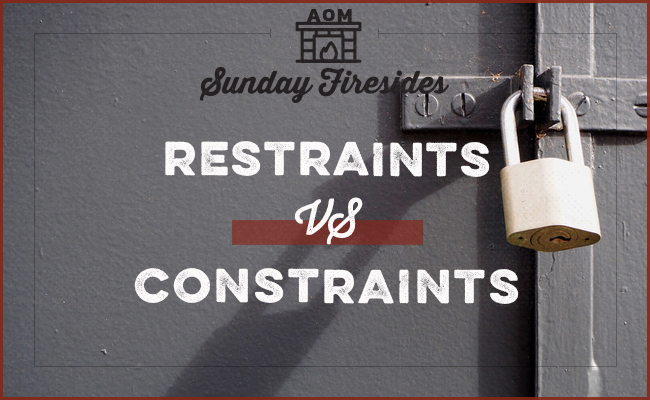 Sunday Firesides are a new series of short reflections to start your week.

Recent studies on willpower have shown that, contrary to the popular belief that people with more self-control are better at exercising discipline, they in fact rarely use this capacity at all. Instead, they minimize the number of temptations they experience in their life in the first place, by 1) pursuing habits they really enjoy (if you haven’t read our piece on utilizing Motivation Over Discipline, I highly recommend it), and 2) structuring their environment in ways that remove the need for willpower.

An excellent way of thinking about how to accomplish that second piece is to think in terms of restraints vs. constraints, an idea gleaned from Ian Bogost.

Restraint is a quality someone exercises to hold themselves back from doing something. Constraint is a limitation built into one’s environment.

Rather than relying on restraint, intentionally introduce constraints to your life. Instead of having junk food in the cabinets, and willing yourself not to eat it, don’t buy it at all. Instead of restraining yourself from looking at your phone so much, remove all its distracting apps.

I know when I nuclear-blocked the possibility of access to distracting websites on my computer, I experienced a great sense of immediate relief; the constant hum of temptation in the background ceased; the fragmentation which occurs when you repeatedly feel an itch, and choose to ignore it, disappeared, and greater focus took its place.

Whenever possible, remove the option of bad choices altogether. Choose constraints over restraints.