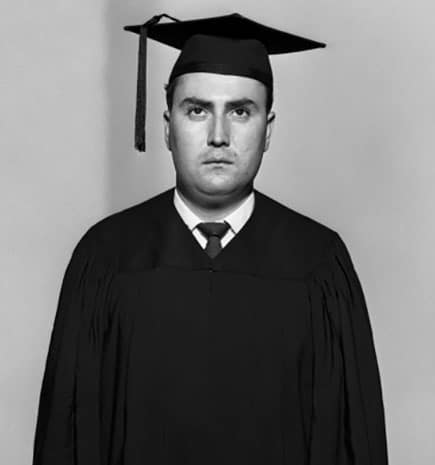 This fall there will be over 20 million students heading to college, either returning from summer break or arriving for the first time. If you’re one of those first-timers, you’re probably pretty excited and thinking a lot about making new friends, living in a dorm, going to parties, and what your classes will be like. You’re likely not, however, doing a whole lot of thinking about how much college will cost you.

Four years from now, when you’re going through the door in the opposite direction, your perspective will probably have changed. Two-thirds of all graduates will accumulate some kind of debt during school — whether that be student loans or credit card debt. And for some reason, male students will accrue more debt than their female peers; men average around $30k in student loans (compared to $23k for women) and nearly twice the non-loan debt (like credit cards) of their female counterparts ($18k to $9k). When you’re staring down that debt in your cap and gown, you may look back and wish you had done some things differently.

When over 500 recent graduates were surveyed by Accounting Principals, they reported 3 big financial regrets about their college career (read the full report):

If you’re just beginning college, or even in the middle of it, you have the advantage of taking steps to address these potential future regrets now, instead of lamenting what you wish you had known as a frosh as you pull away from campus for the last time. Here’s how.

The biggest thing you can do to help yourself in the financial realm while being a student is work your butt off for scholarships and grants. Financial aid can mean many different things: student loans, income-based grants, etc. Most students/parents will stop after filling out an application and the FAFSA, and cross their fingers that some money comes. Scholarships and grants based on academics and other pursuits, however, are where you can really shine and are vastly underutilized. Those based on academics are fairly straightforward. The better grades you get, the better chance you have of receiving them. Many schools have built-in scholarships for students with a certain GPA. (Don’t stop looking once you’re in school — some of my biggest scholarships came my last two years when my GPA was highest.) Those are a clear example of how your hard work in college can directly pay off to monetary rewards.

The other avenue, however, is looking for scholarships is less orthodox places. Consider the following:

There are no shortage of scholarship opportunities available to those who pursue them. The key is to fill out as many applications as possible. You’ll get a lot of rejections, but the few you are awarded will make a big difference. It’s a pain writing essay after essay and filling out form after form, but the literal payoff is well worth it.

Also don’t get into the mindset that any scholarship is too small. For some reason, in school I always thought that $250 or $500 scholarships weren’t worth my time. In reality, they could have paid for books, flights home, food for a month or two, etc. Don’t ignore any of the opportunities for cash that are out there!

2. Consider a Field of Study with High Job Placement and/or High Salary

Admittedly, this is a tricky subject. Going to school to study for a high-paying, in-demand job probably isn’t the best idea if you’re not actually interested in that line of work. You may end up being totally miserable, and that’s just not worth it, even if the pay is great. The key is to find a balance between your interests and your realistic job prospects. My own path may serve as a small case study.

When I first started applying to colleges, I was pretty sure I wanted to be a pharmacist. This was for several reasons, none of which had much to do with actual interest in the job. It seemed fairly easy (my high school self was sure it was about sitting behind a counter and counting pills), very high paying, and had a job placement rate at the time of well over 100%. Win-win-win, right? Turns out, I struggled mightily with chemistry my senior year of high school, and I realized I didn’t actually want to be a pharmacist.

Even though the job prospects were great for pharmacy, I simply wouldn’t have been happy with the profession. So, I switched to studying public relations, which at my school was a combination of business and journalism. Every company in the world has public relations people, and it was about average in terms of starting salary, so it seemed like a wise choice. I didn’t love the actual work, necessarily, but I liked it well enough.

At the same time, I was very interested in religious studies, and had considered switching to that. I had to look at reality, though. The job prospects of a religious studies degree are incredibly limited. You’re either a professor, scholar, or some combination of the two. That’s about it. You have to consider your life goals and if what you’re studying will line up with that. Even at 19, I knew that family was going to be very important to me, and that I would want to provide financially when that time came. I also knew I didn’t want to go through the multiple post-grad years of getting the PhD that is often required for being a college professor. To top it off, I wanted to be able to work in a city of my choosing – whereas with professorships, you often go where the job is.

So, I stayed the course in public relations, and added in religious studies classes when I could. Sure enough, my PR degree is what got me through my first few years after college, and eventually led to me being able to do something I truly love — this job with the Art of Manliness. This end result is not something I could have foreseen when I signed up for a PR degree. But, through some hard work and extra hours put in after a day job I didn’t love (but paid the bills), I ended up exactly where I wanted.

If your degree doesn’t have great prospects for a career (poetry, history, philosophy, etc.), consider getting an education certificate to teach, for example. Or, get a business or IT degree and take the classes your really enjoy when you can, like I did. You’ll be in better position for a job after college, and if nothing else, you can save up for a few years and then strike out to do what you really love. You don’t want to sell out, but take some time to really think about what you’re studying, and make sure that your life goals and values line up with that.

3. Get a Job and Start Saving

Obviously, tuition is going to be the biggest chunk of expenses while you’re in college. There are a million other small expenses as well, however — things that you simply often need cash for. This can include rent, gas, parking passes, your morning coffee, and being able to take your girlfriend out on a nice date every once in a while. Your living expenses have to come from somewhere, and funding them completely through loans or parents just isn’t a good idea. A mature man is a self-reliant man.

To defray the costs of your living expenses (and get an education in the principles of budgeting and saving as well), strongly consider getting a job while you are in school. It’s fairly easy to get jobs on campus for those who seek them out. These are great options because your employer is sure to work around your class schedule and you’ll often have the convenience of not having a commute. The reality is that there aren’t many jobs on campus that are downright fun. There are concessions for sporting events, calling alumni to ask for donations, kitchen duty in the cafeteria, etc. These probably won’t be fulfilling, but being able to impress your gal with a nice dinner and a movie (and being able to pay for the gas) is well worth it.

I would recommend that you consider being a Resident Assistant. I did it for my final two years of college, and even though I didn’t love the job, I got my own room in the dorms (for free) and got my meal plan covered as well. That ended up saving me around $7,000 per year. Many colleges will give a monthly stipend in addition to room and board. It’s about as well-paying as you could ask for as a student.

You may object that you don’t have time for a job, but in all likelihood, you do. Think of all the time you spend on video games, or how much time you waste on Facebook during your study hours. Taking on a job for even just a few hours a week may actually make those study times more effective because you truly have to get it done in that time allotted. Start with a small amount of hours, and build up to however many you can handle. Know that your school comes first, and if that starts to slip, cut down on your hours. Every little bit helps, so don’t think that just a few hours a week is too few.

Below are some additional money-saving tips so you can get some extra green into your bank account:

Implementing the tips above will help you not be one of those students who has financial regrets once you graduate. You absolutely want to have fun in college, and learn and have new experiences, but that needs to be steeped in some measure of reality. To not do so is setting yourself up for a long learning curve — and probably a painful one — once that diploma is in hand.

What did you do, or are doing right now during college to set yourself up for financial success after graduation?