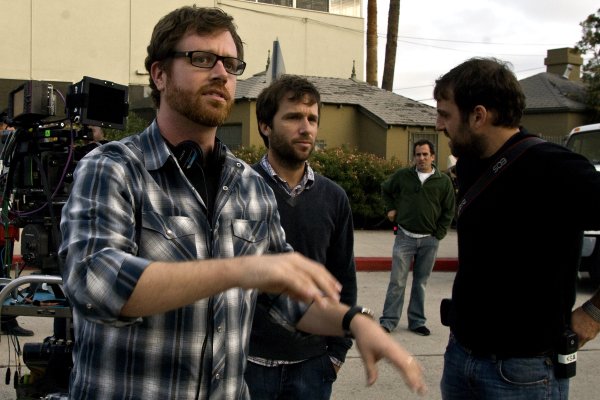 Today we return to our So You Want My Job series, in which we interview men who are employed in desirable man jobs and ask them about the reality of their work and for advice on how men can live their dream.

Speaking of living one’s dream, John Dowdle has what many men who consider the dream job. I have to say that while I’ve enjoyed all the entries in this series, John’s is one of my favorites, because after all, who hasn’t wondered what it would be like to make some movie magic? AoM appreciates John taking some time away from negotiating Tinseltown to give us a glimpse.

1. Tell us a little about yourself (Where are you from? Where did you go to school?)

I’m originally from St. Paul, MN, but I now live in Los Angeles. I’m a movie writer/director. I went to the University of Iowa for two years and then transferred to NYU’s Tisch School of the Arts where I graduated with a film degree.

2. Describe your job and how long you’ve been at it, etc.

Basically, the director is the artistic head of a movie.

There are three main phases to the job of directing a movie:

In many ways, this is the most important part of the process. It’s where the ideas of a film are translated into a kind of game plan, both from an artistic angle (casting, shot selection, style, color schemes, etc.) and a practical (scheduling, locations, etc). In many ways a movie is made or broken in pre-production.

This is probably the phase most people associate with directing. Being on set, calling “action” and giving notes on performance and shots. This phase often feels like trying to paint a picture with a hundred people standing behind you screaming, “hurry up!” It’s very stressful and very exciting. Some days are truly soul crushing and some days you just feel electric.

Often the longest phase of making a movie, and in many ways the most gratifying. This is where you assemble all the parts into something that feels like a movie. The director sits with the editor as the movie is put together and finessed to hide all the ridiculous mistakes the director made on set. Then sound effects are added and mixed, the color is corrected and visual effects are laid in. The director oversees all of this. (But doesn’t actually have to be able to do any of it himself, which is very convenient.)

4. Why did you want to be a movie director? When did you know it was what you wanted to do?

I actually wanted to be a writer first. Growing up in Minnesota, I never knew any directors or even really thought about that as a possible job. When I was 14, I started writing a lot. By the time I graduated high school, I was writing all the time. I decided to go to the University of Iowa because they have a great writing program.

There I took a film course where we studied things like the French New Wave and films by Tarkovsky and the Italian Neorealists, and it just blew my mind. I had no idea film could take so many forms. I was hooked. A year later I transferred to NYU to study film production, and I’ve been doing it ever since.

I find the process of filmmaking a truly magical one. The way shots fit together to create the illusion of things happening that never did. Sculpting time and space to tell cinematic lies. It’s thrilling.

5. If a man wants to become a movie director, how should he best prepare? Do you recommend going to film school?

Film school is a great way to jump start a sense of film language. Making shorts and then showing them to people is invaluable in that sense. But I don’t think film school is necessary. I know a lot of very talented directors who learned by just doing it.

I do think it’s important to learn to write, though. Having a good sense of story is invaluable. I believe nothing is more important than that.

6. How did you personally get your foot in the door of the movie-making business?

I made a movie. And nothing happened. And then I made another movie (“The Dry Spell”). And it got into some festivals and got our names out there a little bit (I say “our” because I work in tandem with my brother Drew). And then we made a third movie (“The Poughkeepsie Tapes”) and it got into the Tribeca Film Festival in 2007, and it caused a bit of a stir. MGM bought it, and a producer named Roy Lee heard of us and offered to let us pitch ideas to him for a remake of the Spanish film REC the same week. We were up against much bigger filmmakers, but we gave it everything we had and got the job. That film became “Quarantine.”

It took me 13 years of destitute poverty to start making a living making films. Before that, it was pretty brutal at times. I was almost evicted a dozen times. I once had to pawn my entire collection of jazz cds so I could take someone out for a business lunch. I once sold my car to make a short. Stuff like that.

7. How do most filmmakers go about getting attention for their work?

Film festivals are a great way. In many ways, those are the gatekeepers to the industry. Screenwriting contests are good. I think just doing it. Making films and making more films. I remember being terrified before a premiere and my wife Stacy told me, “It doesn’t really matter if it goes well or not, because tomorrow you’re going to get up and you’re going to keep doing it.” And she was right. The attention will come in time if you just keep doing the work. I believe that.

8. What are the chances of a filmmaker being able to earn a decent living at their craft?

It’s tough. There’s an adage, “It’s hard until it’s easy.” I think that’s pretty much it. It’s extremely difficult to get anyone to pay you anything, but once anyone does, someone else will probably pay you too.

The drive home from set where I realize, in retrospect, all the things I could have done better. Some of the politics can be frustrating. Bad reviews.

11. What is the biggest misconception people have about the job?

I think people sometimes overestimate the role of the director. (Even directors!) I think directors sometimes get too much credit for both the good ideas as well as the problems. It’s such a collaborative art. A film is never “by” one person. It’s made from a lot of work and skill and suffering by literally hundreds of people.

It can be a bit rough. It’s important to have a very understanding wife. I find I’m either home a lot (during development and post) or not at all (during pre-pro and production).

My best piece of advice if you’re looking to get into directing, is to not get good at anything else. The people who seem to stick with it are the ones who have no other marketable skills.