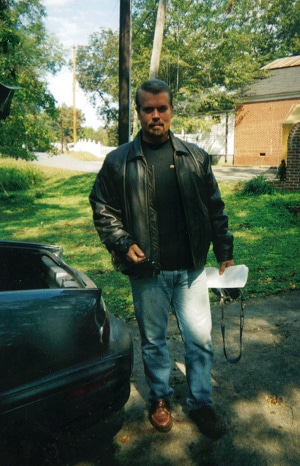 It’s once again time for our So You Want My Job series, in which we interview men who are employed in desirable man jobs and ask them about the reality of their work and for advice on how men can finally become what they always wanted to be when they grew up.

For this installment, we interviewed Mark Lemon. Mr. Lemon is a private investigator. How much does Mark’s life resemble that of Thomas Magnum? Not much it would seem. But he does sport a sweet Tom Selleck-esque stache. Thanks for doing the interview Tom!

I’m from Atlanta, GA, and graduated from the University of Georgia in 1979. I’m 53 years old

2. Why did you want to become a private investigator? When did you know that it was what you wanted to do?

Well, I became a PI in a somewhat roundabout way. I had previously been a Criminal Investigator with NCIS in North Carolina, and when my father became ill, requested to transfer at no cost to them, to the Atlanta NCIS office, so that I could be near him if he got worse. This they declined to do, and so I resigned (after all, family comes first to me, above all else). While it was good to be closer to my dad and my family, I was unemployed. Of course I had to seek employment somewhere, but didn’t really want to get back into law enforcement. As I was good at surveillance, I thought investigating in the private sector would be a good fit for me, and it was.

3. If man wants to become a private investigator, how should he best prepare? What’s the best route into the job?

Contrary to what most guys think, being a cop is actually a detriment to becoming a PI, instead of vice versa. Cops roll in loud and very obvious and visible, while a PI needs to be stealthy and very, very low profile. He needs to get information in a roundabout way, not by using the authority of his office, or uniform. So cops coming to the job find it hard to break old habits, and seldom have I seen cops become good PI’s. On the other hand, I have found that my experience in the military, especially in naval specwar, has been a great help in my current job. In my naval career, I went through BUD/S training for SEAL Teams, got injured about 2/3 of the way through, and then got into the Special Boat Units, tasked with inserting and extracting the SEALs. There, stealth and independent thinking was a valued commodity, just as it is in the PI industry. I would say that a guy with a good, practical military background (as an “operator,” not as an office “poag”) who takes the state course in licensing, who has learned a lot about deception, cover and concealment, and is a good fast thinker, will be a good PI.

4. How competitive is it to get a job as a private investigator? Do most guys set up their own business or work for someone else?

It’s not really that hard to get hired, as long as you’re qualified, but staying on the job is harder. This job has a lot of turnaround, and you see guys come and go due mostly to their own job performance. If you see a guy who has been at the same company for a number of years, it’s a safe bet that he’s getting the job done. Some guys leave and start their own businesses, but I know one such guy, who tells me that he’s being eaten up in insurance costs for himself as well as his investigators, so to me it’s not worth the hassle.

Working independently, making many of your own decisions, solving problems using your own skills and not having someone constantly looking over your shoulder.

6. What is the worst part of the job?

Boredom. Often you have to sit in a surveillance position for literally hours upon hours until something happens, if it happens at all. In such a situation, you can’t read a book, or newspaper to relieve the boredom, because as soon as you do that, something is bound to happen, and you’ll miss it. I should say here that I work workman’s comp cases exclusively, meaning that I conduct surveillances on people who claim to have been injured at work. As such, getting videotape of them changing an engine out of their truck, exercising, or other such activity, is the key to my work. Sometimes it happens, and sometimes nothing happens, but you have to remain constantly vigilant nonetheless.

I’m not really sure, but I feel that most people probably think it’s a lot more glamorous than it really is. It’s a lot of very hard work; doing hours of research online before you even leave the house, driving miles to the case, sitting hours on a site waiting for something to go down, getting it all on film, driving back home, and then writing it all up in a report. Not so glamorous. But there are moments, like when after hours of waiting, thinking the day’s wasted, and suddenly seeing the subject (supposedly completely disabled) drive from his place, you follow him for miles and miles to a junkyard, where he spends the next 2 hours crawling all over a junked car stripping parts off of it. And documenting it all on videotape. That makes the job worthwhile.

Not too bad. While you may have to work some major holidays (as that’s when most people are apt to be active), you often start work very early, and so are able to return home in the neighborhood of 3 or 4 PM, instead of the 6 or 7 many others experience.

Just an anecdote. Once I had to follow a woman back to her very secluded, rural farm house one afternoon, and set up surveillance to see if she’d do any work around the farm. This meant that I had to stay there all night, and wait until the wee hours of the morning when many folks do their farm chores. Well, there was no way I could just sit in my car in front of her house, or anywhere near it, due to the secluded nature of her place. I’d have stood out like a sore thumb. So I had to park my car about a mile away, and insert myself with my video camera into her area through some very thick woods.When I arrived, I set up my position behind a fallen tree, from which place I could see her house pretty well. I had to be very quiet as she had a lot of dogs which ran loose around her property. Well, I got into position, watched for many hours with no activity, and about 3 or 4 in the morning, fell asleep. After a while, I was startled awake by a rustling noise. I peeked over the top of the log, and saw a big black rottweiller sniffing the ground, and walking straight in my direction. I luckily had work camo fatigues, and had a navy K-Bar knife with me, as well as having sprayed myself with that scent-blocker that deer hunters use. The dog came closer and closer, and I had absolutely no choice but to become as still as I possibly could, making sure that I slowly reached down and grabbed the handle of my knife. The dog came right up to the log, stepped up on top of it, and stood looking over at me, and sniffing my clothes. After what seemed like an hour, but which was only probably 5 seconds, he stepped down, right onto my chest, then off onto the ground. He walked along about 15 more feet, then turned and ran back to the house. I lay there for about 30 minutes, making sure that he was really gone, and just trying to regroup my shaken nerves. Afterwards, I slowly made my way to another position with better concealment, from where I later got some good video of her working outside. I feel that on that day, more than on any other, I earned every penny of my salary.