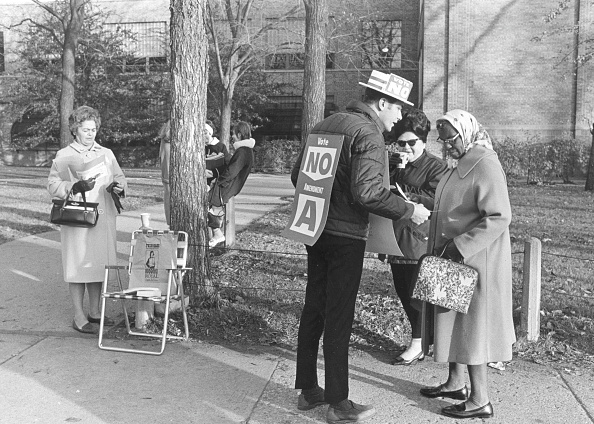 Editor’s note: This is a guest article from Alexander Franz.

If you look at news on the web, on TV, or on your social media feeds, it seems like politics have never been more toxic than they are today. Partisanship, gridlock, and continuous outrage make it easy for a man to look at the political realm and say, “No thanks.” Yet the thread of politics runs deep through the history of man — occasionally giving us knots, but also weaving in some of our strongest leaders and noblest ideals. It has created a fabric that ties us together, across social classes and throughout the generations. A few eminent men throughout history make our responsibility clear:

“Be master of yourself, and view life as a man, as a human being, as a citizen, and as a mortal.” —Marcus Aurelius

“It ought to be axiomatic in this country that every man must devote a reasonable share of his time to doing his duty in the Political life of the community.” —Theodore Roosevelt (Find more of Teddy’s incisive thoughts on citizenship here.)

The most direct way to get involved in politics is to run for office yourself, but you don’t have to go all-in to make a difference. There are a wide range of opportunities to participate in the democratic process, and along the way you will sharpen your own beliefs, strengthen your connection with your community, and make friendships forged in common values and shared experiences. I’ve met some of my best friends while working on campaigns, and I hope your journey can be just as rewarding.

If you have never volunteered for a campaign before, gotten involved with a political party, or helped facilitate an election, this is your call to action, and your guide to getting started. If you are already active in politics, you may find a new way to broaden your experiences and take on a larger role in your community. Your town, your state, your district, and your country cannot improve unless good men open the gates and step into TR’s rhetorical arena. Let’s get started.

This article is written with specific information for readers in the United States, but similar opportunities are available in countries around the world.

1. Volunteer for a Candidate

This is where it all begins. Volunteering for a candidate is a great introduction to politics because it starts with a personal connection. If your ideology is still in the formational stages, or if your beliefs do not fall neatly into one party’s platform, you can look for a candidate who meets your personal fitness test.

Joining a campaign is pretty simple: You can generally sign up to volunteer on a candidate’s website or by making a visit to their campaign office. Talk to the campaign’s volunteer coordinator and find out where they need help. Your options will most likely include:

You can use your volunteer work to enhance talents you already have or to build up new skills. I was very shy and introverted for most of my teenage years, so the first time I had to cold-call voters, I thought I was going to die. Several years later, I made over 1,000 calls for a single campaign, and along the way developed a lot of confidence and communication skills.

Serving on a campaign will inevitably bring you into contact with people who do not want to support your candidate — or who will enthusiastically tell you they are supporting the opponent. This is a healthy part of the political process, and it is a great way to enhance your debating skills as well as your ability to stay cool under pressure. This is the time to refresh yourself on AoM’s rules for civil conversation (and not the improvised weapons article!).

Campaigns focus on different activities as time goes by. In the spring and summer, emphasis is placed on winning the caucus or primary to become the party’s official nominee, as well as building a large database of potential supporters. As summer comes to an end and November approaches, there is a greater need for talking to those potential supporters over the phone or in their neighborhood, identifying likely voters, and then making sure they vote on Election Day.

In my experience, local and state-level campaigns offer the best opportunities for one-on-one interaction with a candidate, and smaller operations will usually allow folks to take on more roles as a volunteer — especially college students who tend to have fewer obligations on their time, and be hungry, idealistic, and willing to do almost anything.

When I was a sophomore in college, I volunteered as a full-time intern for a gubernatorial campaign, and it was one of the most rewarding experiences of my life. I did just about every job in the campaign office and got to travel across the state on a bus tour with the candidate. The feeling of camaraderie that built up over the summer was only surpassed by the excitement that came when we won the election. I have also helped out on campaigns that lost, and in those moments, the camaraderie with the other volunteers remained and helped us move ahead.

Presidential campaigns offer more publicity and resources, but their scale prevents you from meeting or even seeing the candidate very often. Volunteer work is heavily weighted toward contacting voters — sometimes in another state — with most other activities done by professional staffers. When a presidential candidate does come to town, though, it brings concert-like stages, national media, motorcades and security details, and a strong sense that your volunteer work is part of something consequential and historic.

2. Volunteer for a Single-Issue Organization

An intermediary step between individual candidates and formal political parties is the chance to volunteer for a single-issue organization. These are groups committed to a specific cause, such as conservation, gun rights, labor rights, business interests, or local concerns. The work available to volunteers is similar to that of an individual campaign, but may be used to sway public opinion on a ballot initiative, major legislation, or even a city council proposal. Many groups support candidates across party lines, and this can be a great way to turn the usual partisan battles on their heads.

The best way to find a group to support is to look at what you make time for in your life already. The odds are that your career field, social groups, and hobbies have some kind of public advocacy component, and therefore there’s likely an organization that could use your help.

3. Volunteer for a Party

If you have a strong connection with the platform of a specific party, they will be glad to have you onboard. The major parties have county-level organizations that will provide the easiest access, but there are congressional district-level and state-level organizations in need of help as well.

You can join committees devoted to specific objectives (such as fundraising, engaging young voters, building web and technical capabilities, etc.) and coordinate volunteer activities with all of the party’s candidates. Committees provide you another opportunity to match up skills you already have, or to give yourself a proving ground for new talents and expertise. They are a great way to cast a wide net in politics and meet new people quickly.

If you want to take on a leadership position within the party, such as chairman, treasurer, or secretary, you will have to be elected by your fellow party members. This can require a lot of groundwork, as parties like to elect people with a long and demonstrated loyalty to the organization, but it is also a way to take your activism to the next level and help set the course for your party.

You can also serve as a delegate to your state and national party conventions. Delegates vote on the official party platform and nominate candidates for office — most notably for president and vice president. States with caucuses choose delegates in physical gatherings of voters, while states with primaries select delegates via ballot. Check with your state party to find out what kind of process they use. Having a large network and a reputation for loyalty are essential to being elected as a delegate, but the reward is a one-of-a-kind experience. Conventions are the Super Bowls of politics, with candidates, committees, and other organizations taking over a city with receptions and parties for delegates to attend.

4. Volunteer at a Polling Place

An often-overlooked opportunity to get involved in an election is to help that election take place. Election workers are the people who check in voters at the polls, distribute ballots, and oversee the nuts and bolts of election day. It provides a unique front-lines view of the electoral process without the partisan combat.

Each state will have different requirements for serving as an election worker. You can contact your local clerk’s office, or check out the U.S. National Election Assistance Commission to get started.

Spend Yourself in a Worthy Cause

Whatever path you choose to take in politics, make sure it is oriented toward the values and beliefs that matter most to you. Pursuing causes that stir your passion will keep you going when opposition gets heated or your campaign loses. Being politically active is an excellent method of self-discovery and reflection, as well as an unparalleled way to make connections outside your immediate family and friends. Approached with this mindset, it can build your character and your community.

Theodore Roosevelt was not born into politics. He was studying law at Columbia when he decided to walk down to the local Republican district office and force himself into the political process. Most of the people in upper New York society found politics to be an undignified pursuit, and could not understand why TR was wading into the muck. He made both friends and enemies, but turned his early activities into a seat in the New York State Assembly. Years later, after two terms as President, he transformed the pull of politics into immortal words for our own generation to discover:

“The credit belongs to the man . . . who spends himself in a worthy cause; who at the best knows in the end the triumph of high achievement, and who at the worst, if he fails, at least fails while daring greatly, so that his place shall never be with those cold and timid souls who neither know victory nor defeat.”

Alexander Franz started volunteering for campaigns in high school and has helped candidates for governor, congress, and president. He would like to thank every candidate for choosing to run and giving him the opportunity to grow and serve through the political process.