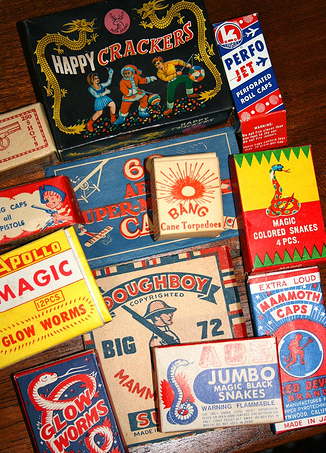 I am apt to believe that it will be celebrated by succeeding generations as the great anniversary festival. It ought to be commemorated as the day of deliverance, by solemn acts of devotion to God Almighty. It ought to be solemnized with pomp and parade, with shows, games, sports, guns, bells, bonfires, and illuminations from one end of this continent to the other, from this time forward forever more. —John Adams, 1776

Ever since colonial times, fireworks have been an important part of celebrating American Independence. On the very first 4th of July in 1777, fireworks made of black ash were shot off. 12 years later, fireworks accompanied George Washington’s Inauguration celebration.

Most men in the United States probably have fond memories of lighting Black Cats or waving a colorful sparkler in the warm Fourth of July air. The operative word in fireworks is fire, the basic element to which all men experience a primal attraction. Even when you’re grown and have kids of your own, nothing can kill your boyish desire to make a racket with fireworks.

So in honor of the 4th of July and the little boy in all of us who still gets a kick out of celebrating American Independence with noise and light, the Art of Manliness presents the Man’s Guide to Fireworks:

Fireworks laws vary state by state and city by city. While consumer fireworks are legal in many states, many cities have strict laws governing their use within city limits. While I was growing up, the laws weren’t that strict (or maybe I just never bothered to look them up), but I’ve noticed that many communities these days are requiring the purchase of a permit to set off fireworks. Permits run anywhere from $20-$40. They’re generally only good for a certain period of time, so make sure to shoot off all the fireworks you want before your permit expires.

For a rundown of the laws governing fireworks in your state, check out Fireworks.com. To find out your local city laws, check your local newspaper. They usually print the laws in the paper around the 4th of July. 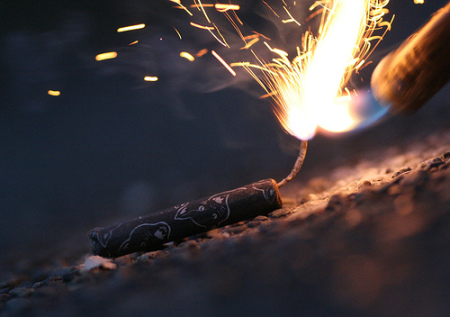 Firecrackers. Black Cats, M-80, Lady Fingers. The variety of firecrackers is immense. The whole point of firecrackers is to explode and make loud noises. They generally come in strings that number from a measly 12 to a gargantuan 10,000. Firecrackers by themselves are fun. Firecrackers + old action figures/stuffed animals = mega-fun. What boy has not wrapped a string of Black Cats around an old Sergeant Slaughter action figure or taped an M-80 to a Ninja Turtle? It’s some sort of weird rite of passage that every red blooded American boy must go through. 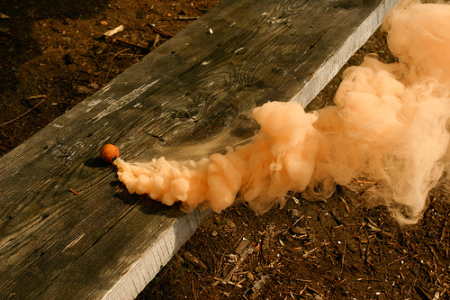 Smoke Bombs. Smoke bombs can provide hours of entertainment to children with wild imaginations. Most smoke bombs don’t explode, they just, well, smoke. Some smoke bombs are best if used during the daytime because it’s hard to see smoke at night. Generally, two types of smokers exist: color smoke balls or cylindrical smoke grenades. The smoke balls come in a variety of colors. As a kid, I’d use these as my ninja smoke screen. The smoke grenades are a kid’s dream toy. They look like little hand grenades. When lit, they emit a thick cloud of white smoke. My friends and I would try to recreate battle themes with smoke grenades. They’re good for ninja smoke screens, too.

Novelty. When you’re 8 years old, the novelty fireworks are where it is at. There’s a variety of devices that range from chickens that lay colorful eggs made of sparks to tanks that shoot a rainbow of patriotic spark missiles. After the tank has emitted its sparks, there’s often a small firecracker explosion. You can extend the fun of tanks by wrapping Black Cats around them and blowing them to smithereens. 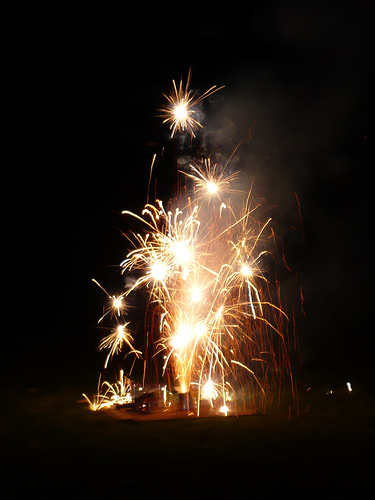 Fountains. Fountains are usually cone shaped devices that sit on the ground and shoot off a shower of colorful sparks. I’ll be honest, as a kid, I always thought fountains were pretty boring. The sparks don’t go up very high and it doesn’t really last that long. If you’re looking for a mild, yet pretty firework to shoot off with the kiddos, this is a good one. And girls really gravitate toward them. My wife says these were her fave. 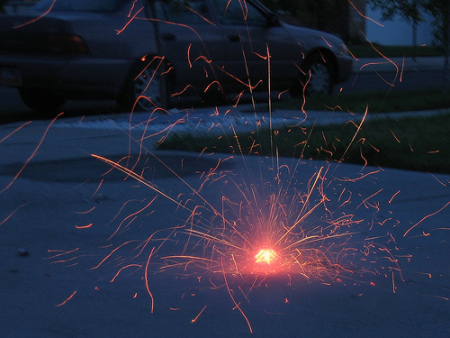 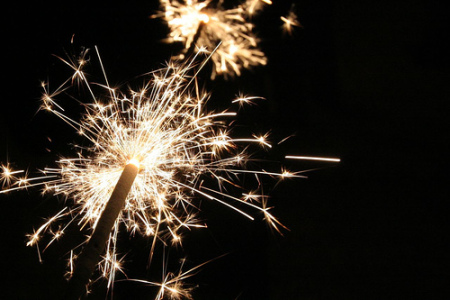 Sparklers. Sparklers are another great firework for kids to play with. Sparklers are sticks that give off colored sparks when lit. You can wave them around and create a light show. Kids get a hoot out of writing their name with them. There are two types of sparklers. The first are ones made from metal. The second are made of paper and are often called Morning Glories. Morning Glories are a bit safer because they don’t leave a red hot metal stick when done burning. 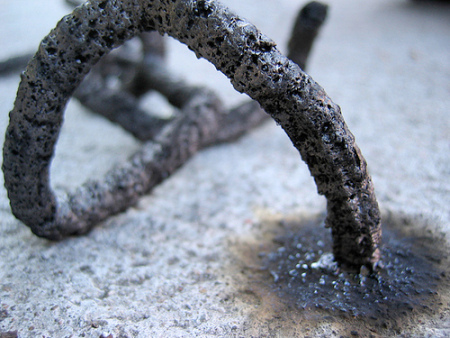 Poppers, Snaps, and Snakes. These are the kiddy fireworks. Poppers are little bottle shaped devices that have a string that when pulled, shoot confetti out. Snaps or “pop-pops” are little paper packets that contain minerals that ignite on impact with the ground. They make a small popping noise. Snakes are small pellets that when lit, emit a long brittle carbon ash that looks like a snake coming from the ground. Despite their tameness, the real youngins will find them endlessly interesting. 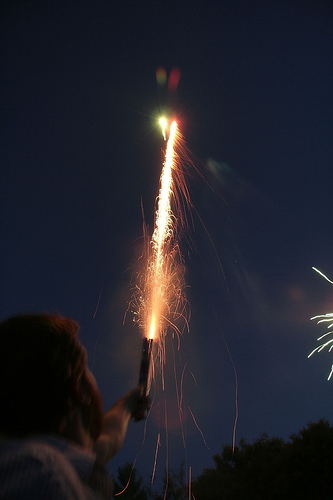 Roman Candles. Roman candles are long tubes that when lighted at one end shoot off colorful balls. Some of the shots crackle, flash, or explode. You can actually hold these in your hand while they fire off (it’s not recommended, but many people do it). Because of this ability, many young nincompoops use Roman Candles to engage in a mini firearms battle. Don’t do this. 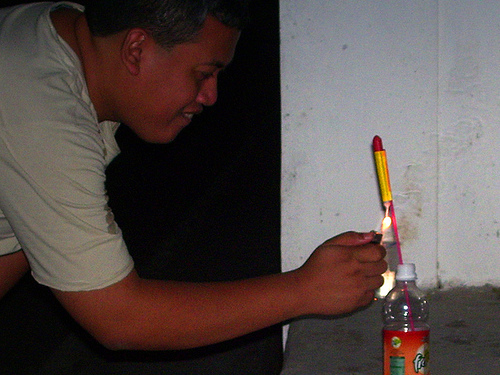 Missiles and Rockets. Bottle rockets are probably the most famous of this genre of fireworks. They’re small rockets that whistle while blasting off into the sky and explode when they reach their peak. Bottle rockets are illegal in many states, so check your local fireworks ordinances before shooting them off. 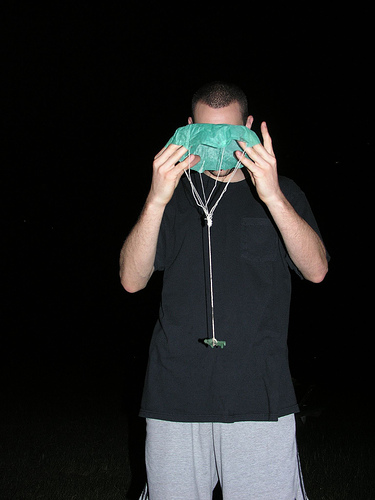 Parachutes. I loved me some parachutes. The idea is pretty simple. Stuff a green plastic army man with a parachute attached to it down a tube packed with mild explosives. Ignite and watch said green army man float down to the ground. Shoot these off and have fun watching the kiddos try to catch the parachute as it makes its way back to earth. 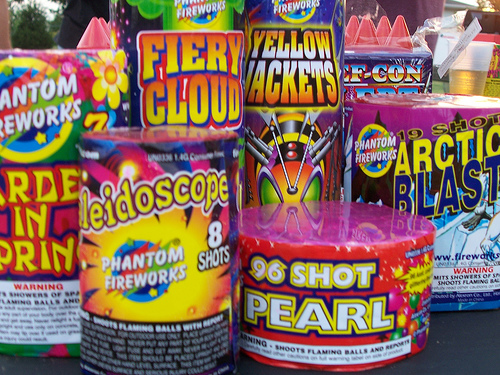 Aerial Repeaters. Aerial repeaters let you put on a fireworks display right in your backyard. They consist of multiple tubes bundled together to form a “cake” looking device. Each tube has a small aerial shell that explodes in a colorful crackling display in the sky. What’s great about the aerial repeater is you just have to light one fuse. The rest takes care of itself.

The National Council on Fireworks Safety estimate that there was over 9,200 fireworks related injuries in 2006. That’s a lot. But if people use a bit of common sense and follow some simple safety precautions, you can enjoy a fun and safe 4th of July Celebration. Here’s a run down of safety guidelines to take into consideration when shooting off fireworks this holiday.

Teaching Your Children How to Use Fireworks

Letting kids play with fireworks is definitely frowned upon by the priggish busy bodies of the Nanny State. But we here at AoM don’t believe in coddling kids. So, while fireworks are dangerous, if kids are taught how to respect them and use them properly, they can easily go through childhood without suffering any fireworks related injuries. I started playing with fireworks when I was about 7. The only injury I ever suffered was that I stepped on a flaming egg laid by one of those chickens. I got a bad blister and a chewing out by my dad to be more careful.

Here’s a rough guide on teaching your kids to enjoy fireworks safely.

Ages 5-6: Let kids play with “pop-pops” — those things you throw on the ground and make a snapping noise. These things are pretty safe and the kids can have fun with them without injuring themselves or anybody else. Start teaching your kids the importance of firework safety by telling them not to throw them at other people or using them in the house.

Ages 7-8: By this time, kids are probably ready to graduate to fireworks that actually require ignition by fire. Sparklers, snakes, and smoking fireworks are probably good for kids in this age group to use. They don’t explode, so you don’t have to worry about them blowing their face off. However, they’ll be learning how to light fuses and to be aware of other people as they use fireworks- skills that are necessary in safe firework practice.

Ages 9 and up: Alright, by now I think kids are good to go with most fireworks you can find at the fireworks stand. Just watch them carefully and make sure they don’t do anything stupid.