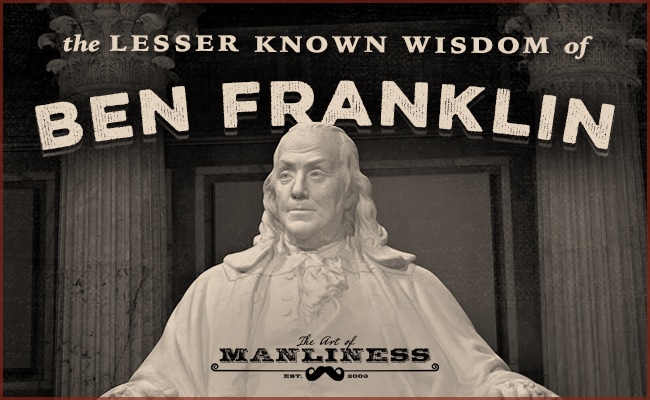 Editor’s Note: Benjamin Franklin was one of the most quotable men in history. Everyone knows his famous sayings like “God helps them who help themselves,” and “Early to bed and early to rise, makes a man healthy, wealthy, and wise.” But his vast body of writings contain many fantastic bits of sagacity that aren’t as commonly noted. Below I’ve compiled some of my favorite, lesser known pearls of old Ben’s wisdom. Hope you enjoy.

“If a sound body and a sound mind, which is as much as to say health and virtue, are to be preferred before all other considerations, ought not men, in choosing a business either for themselves or children, to refuse such as are unwholesome for the body, and such as make a man too dependent, too much obliged to please others, and too much subjected to their humors in order to be recommended and get a livelihood?”

“There are in life real evils enough, and it is folly to afflict ourselves with imaginary ones; it is time enough when the real ones arrive.”

“After all, wedlock is the natural state of man. A bachelor is not a complete human being. He is like the odd half of a pair of scissors, which has not yet found its fellow, and therefore is not even half so useful as they might be together.”

“If a man empties his purse into his head, no man can take it away from him. An investment in knowledge always pays the best interest.”

“The worship of God is a duty; the hearing and reading of sermons may be useful; but if men rest in hearing and praying, as too many do, it is as if a tree should value itself in being watered and putting forth leaves, tho’ it never produced any fruit.”

“Eat to please yourself, but dress to please others.”

“I would advise you to read with a pen in hand, and enter in a little book short hints of what you find that is curious, or that may be useful; for this will be the best method of imprinting such particulars in your memory.” 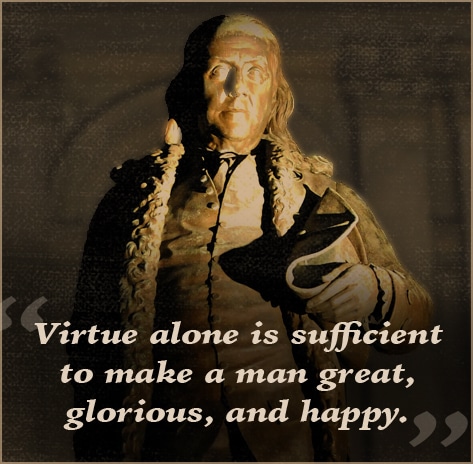 “When you incline to have new clothes, look first well over the old ones, and see if you cannot shift with them another year, either by scouring, mending, or even patching if necessary. Remember, a patch on your coat, and money in your pocket, is better and more creditable, than a writ on your back, and no money to take it off.”

“Hope and faith may be more firmly built upon charity, than charity upon faith and hope.”

“Our opinions are not in our own power; they are formed and governed much by circumstances that are often as inexplicable as they are irresistible.”

“A man of words and not of deeds, is like a garden full of weeds.”

“The art of getting riches consists very much in thrift. All men are not equally qualified for getting money, but it is in the power of every one alike to practice this virtue.”

“He that is known to pay punctually and exactly to the time he promises, may at any time, and on any occasion, raise all the money his friends can spare. This is sometimes of great use.”

“The ancients tell us what is best; but we must learn of the moderns what is fittest.”

“The most trifling actions of a man, in my opinion, as well as the smallest features and lineaments of the face give a nice observer some notion of his mind.”

“An old young man will be a young old man.”

“By the collision of different sentiments, sparks of truth are struck out, and political light is obtained. The different factions, which at present divide us, aim all at the public good; the differences are only about the various modes of promoting it.”

“A great talker may be no fool, but he is one that relies on him.” 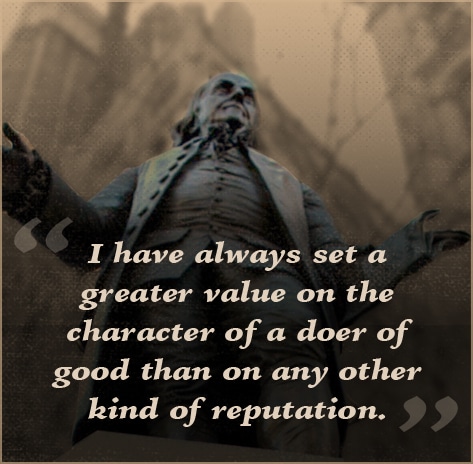 “Fear to do ill, and you need fear naught else.”

“I agree to this Constitution, with all its faults — if they are such; — because I think a general government necessary for us, and there is no form of government but what may be a blessing to the people, if well administered; and I believe further, that this is likely to be well administered for a course of years, and can only end in despotism, as other forms have done before it, when the people shall become so corrupted as to need despotic government, being incapable of any other.” (Speech made in the Constitutional   Convention, 1787)

“It is a common error in friends, when they would extol their friends, to make comparisons, and to depreciate the merits of others.”

“If you would not be forgotten, as soon as you are dead and rotten, either write things worth reading, or do things worth the writing.”

“There are two ways of being happy — we may either diminish our wants or augment our means — either will do, the result is the same; and it is for each man to decide for himself, and do that which happens to be the easiest. If you are idle or sick or poor, however hard it may be to diminish your wants, it will be harder to augment your means. If you are active and prosperous, or young, or in good health, it may be easier for you to augment your means than to diminish your wants. But if you are wise, you will do both at the same time, young or old, rich or poor, sick or well; and if you are wise, you will do both in such a way as to augment the general happiness of society.”

“Each year one vicious habit rooted out, in time might make the worst man good throughout.”

“Some, to make themselves considerable, pursue learning; others grasp at wealth; some aim at being thought witty; and others are only careful to make the most of a handsome person; but what is wit, or wealth, or form, or learning, when compared with virtue? It is true we love the handsome, we applaud the learned, and we fear the rich and powerful; but we even worship and adore the virtuous.”

“Having lived long, I have experienced many instances of being obliged by better information or fuller consideration to change opinions, even on important subjects, which I once thought right, but found to be otherwise.”

“The wit of conversation consists more in finding it in others, than showing a great deal yourself. He who goes out of your company pleased with his own facetiousness and ingenuity, will the sooner come into it again.” 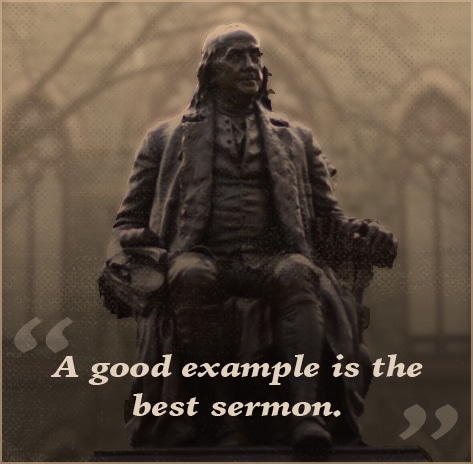 “The way to be safe, is never to be secure.”

“The way to secure peace is to be prepared for war. They that are on their guard, and appear ready to receive their adversaries, are in much less danger of being attacked, than the supine, secure, and negligent.”

“Happiness consists more in small conveniences or pleasures that occur every day, than in great pieces of good fortune that happen but seldom to a man in the course of his life.”

“It is said that the Persians, in their ancient constitution, had public schools in which virtue was taught as a liberal art or science; and it is certainly of more consequence to a man, that he has learned to govern his passions in spite of temptations, . . . than to be a master of all the arts and sciences in the world beside.”

“A brother may not be a friend, but a friend will always be a brother.”

“Men are subject to various inconveniences merely through lack of a small share of courage, which is a quality very necessary in the common occurrences of life, as well as in a battle. How many impertinences do we daily suffer with great uneasiness, because we have not courage enough to discover our dislike.”

“That sort of wit, which employs itself insolently in criticizing and censuring the words and sentiments of others’ conversation, is absolute folly; for it answers none of the ends of conversation.”

“I believe long habits of virtue have a sensible effect on the countenance.”

“When there is so much to be done for yourself, your family, and your country, be up by peep of day! Let not the sun look down and say, ‘Inglorious here he lies!'” 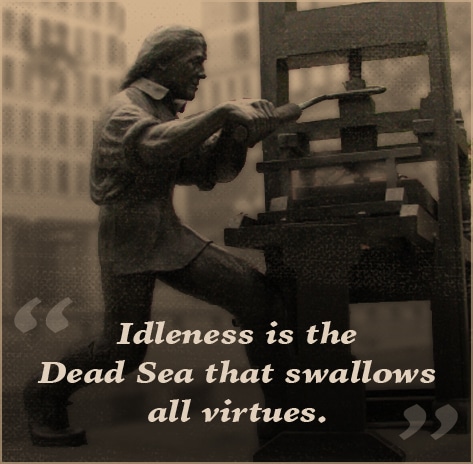 “It is observable that God has often called men to places of dignity and honor, when they have been busy in the honest employment of their vocation. Saul was seeking his father’s asses, and David keeping his father’s sheep, when called to the kingdom. The shepherds were feeding their flocks, when they had their glorious revelation.”

“If you would not be forgotten, do things worth remembering.”

“Would you live with ease, do what you ought and not what you please.”

“Man and woman have each of them qualities and tempers in which the other is deficient, and which in union contribute to the common felicity.”

“When I am employed in serving others, I do not look upon myself as conferring favors, but as paying debts. I have received much kindness from men to whom I shall never have an opportunity of making the least direct returns; and numberless mercies from God, who is infinitely above being benefited by our services. Those kindnesses from men I can, therefore, only return on their fellow-men, and I can only show my gratitude for those mercies from God by a readiness to help His other children.”

“It is generally agreed to be folly to hazard the loss of a friend rather than to lose a jest. But few consider how easily a friend may be thus lost. Depending on the known regard their friends have for them, jesters take more freedom with friends than they would dare to do with others, little thinking how much deeper we are wounded by an affront from one we love.”

“Life, like a dramatic piece, should not only be conducted with regularity, but it should finish handsomely.” 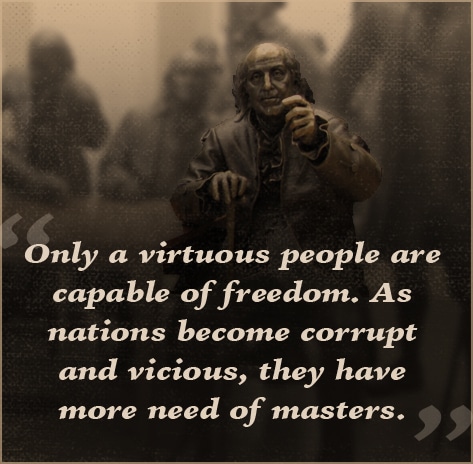