Editor’s note: There are few things more manly than the independent craftsman. The Art of Manliness would like to support the independent craftsmen out there by featuring from time to time a man who’s trying to make a living working with his hands. Today we spotlight Jazeps Tenis, who started Inkleaf Leather Co., maker of leather covers for Moleskine and Rhodia notebooks. He has generously not only shared his thoughts on the philosophy of craftsmanship and the story of how he decided to become a craftsman himself, but is also giving away one of his handmade leather notebook covers to a lucky AoM reader. See below for details on the giveaway.

The path to joy begins in humility.  The arrogant man may mistake power or influence for joy, but he is a builder of invisible empires, an illusion which is upheld only by a persistent act of the will.  The man who works with his hands, however, hasn’t any room for conceit.  The materials with which he works are unsympathetic towards his inflated self-image.  It responds only to skill born upon many hours of practice.  This is the craftsman’s humility.

Not only does this humility produce the foundation for joy and satisfaction in one’s work, but it also teaches us about the temporal nature of things. We begin to appreciate that what we create, even if made to last for a long time, will not last for all time. It is in some respects a reminder of our own mortality. This perspective on the material elements of life focuses us on the personal.

We create and pour our hearts into these things because they are a reflection of us. With everything the craftsman creates, he says, “Here I am.” If a flaw is noticed, is it fixed or hidden? Is proper care given to the details of the work, or is it hastily put together? All of these elements reveal something of the man that made them. They tell a piece of his story. They give him occasion to take pride in what he does, and from that pride comes satisfaction.

The act of working with the hands also makes us more present to ourselves and the world around us. Imagine a reality devoid of sensation. One which had neither sight, nor smell, nor sound, nor taste, nor touch. Now imagine that these sensations not only had been but now were not, but had never been at all. How would you know if you existed? There would be no basis for thought, no means of relating one thing to another. The very notion of existence would be irrelevant. Why is this important? Because we perceive through the mind what we experience through the body.

When our work is unnecessarily abstracted, we become divorced from it and from ourselves. The connections we maintain with our physical selves keep us bound to reality. It is therefore perhaps understandable that with work related depression also comes a lack of sense of self. These ideas of course apply to more than the craftsman. For example, the man in the gym engages with the weights so that he might feel a sense of self in his muscles. Were there no sensation either of tension during the act, nor growth afterwards, it would feel like a futile action.

I had often been told growing up that the surest path to a satisfying life (or at least a secure one) was through a college education. There was an unspoken assertion that to work with one’s hands implied a lack of ability in using one’s mind. While the mind is a wonderful thing, it has always struck me as misguided to separate it from, much less elevate it above, the body. The ideal ought to be cohesion. The craftsman draws upon the abstract capabilities of the mind in pursuit of the concrete realization of his craft. It fuels his creativity and aids him in solving problems. Without it he is an automaton. With it, he is an artisan.

The motives of the craftsman are also one of the primary causes of his joy. There is a Japanese concept called wabi sabi. It means beauty in imperfection. It means not just accepting, but cherishing what is and what will be. The act of recognizing this beauty is a joy unique to the craftsman. When you remove the craftsman from the equation, beauty and perfection look like mass production. You have consistency from one product to the next, but the concerns which motivate their creation are very different. Whereas the business man creates a product in order to maximize profit and is often divorced from its creation, the craftsman has the pleasure of creating something so that it might be excellent in its own right. It is not a means to an end, but an end in itself. The slight variations from one project to the next do not represent a failure on the part of the craftsman, but instead reveal that with each new project the pursuit of perfection begins anew.

My Path to Becoming a Craftsman 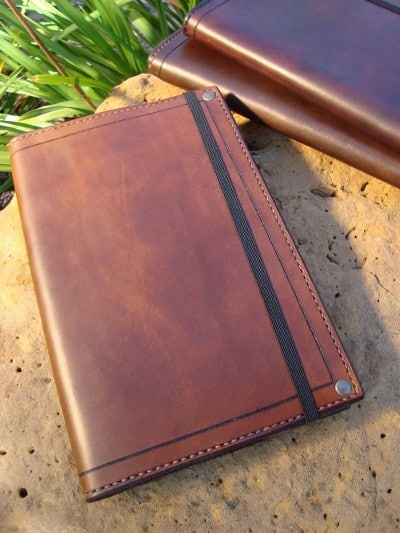 My journey to becoming a craftsman began on the heels of a job loss.  I had been working as a video editor for a small production company.  I took the job right after college and though I began it with great enthusiasm, the tediousness of the work began to dull me inwardly.  It was essentially the same project over and over again with different PR people whose perfectly framed words couldn’t hide an underlying uneasiness and lack of genuine conviction.  Not to mention that sitting at the desk all day had adverse effects on my health and exacerbated an existing condition which though not life-threatening, had been quite severe.

At a certain point, due to a lack of work, my hours were reduced.  I was barely getting by and very much doubted they would return.  Several months later, the job was gone entirely.  Having evaluated the previous years, I knew first of all that I didn’t want a desk job again.  I don’t think humans were made to sit all day.  Second, I knew that I wanted some degree of autonomy.  I had read that at the start of the 20th century that 9 out of 10 men owned their own shop or business.  A man ought to be able to chart his course and follow it.  Lastly, I knew that I wanted to do something meaningful.  I’m sure someone, somewhere convinced themselves that the editing of PR people that I did was valuable, but I’ve never been able to see it.  My work always felt detached from my convictions.  We can only fragment ourselves so much before we are irreparably broken.

As my fiancée, Steffi, and I considered what we would do next, we reflected on how we had both always enjoyed working with our hands.  Had we been born 150 years ago, we might well have been farmers.  The notion of leather working came to us one day while discussing our books.  We threw ourselves into learning the trade, spending thousands of dollars and often working 16 hour days.  We were both delighted.  It felt real and substantial.  Our work mattered.  Just knowing that we were creating something which someone else would use, something which might very well come to be dear to them over time, it made all the difference in the world.

As our skills improved, we began selling our products and doing custom work.  Up until this point, the leather working had largely been a hobby.  Our journal covers started out not because we were looking to create a niche, but simply because I wanted to put some leather on my Moleskine’s.  In August of 2010, we decided to try our hand at doing leather full-time and started Inkleaf Leather Co. We saw an opportunity to reach a broader audience online and that brings us to where we are now, working with our hands and enjoying every minute of it. 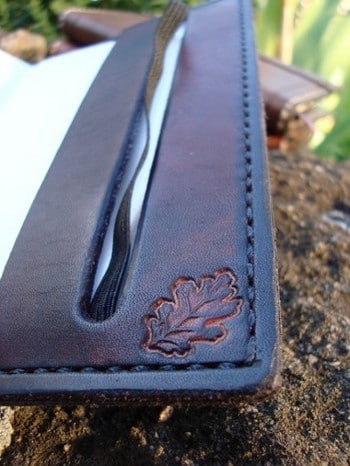 We’ve been talking a lot about the manliness of pocket notebooks here on AoM lately. If you’re fond of the Moleskine or Rhodia variety, then enter to win one of Inkleaf’s leather notebook covers. They come in a variety of sizes and colors and are hand cut, hand tooled, hand dyed, hand stitched and hand finished. These leather covers protect your notebook and look handsome. Mmmm, and they smell like leather. 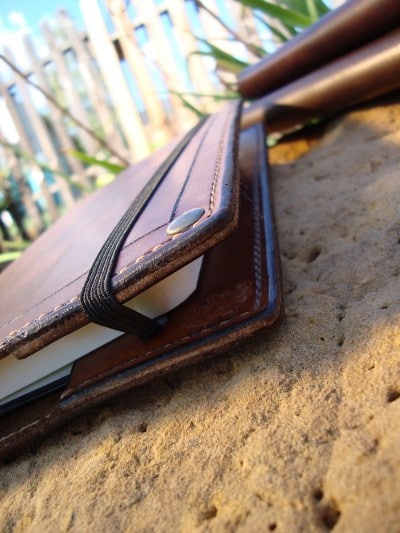 How to Enter the Giveaway

Leave a comment telling us what you use your pocket notebook for.

We’ll randomly select one comment and that man will win a handmade leather notebook cover from Inkleaf Leather Co.

The Cure for Quarantine-Induced Malaise: Enrollment for The Strenuous Life Is Open! 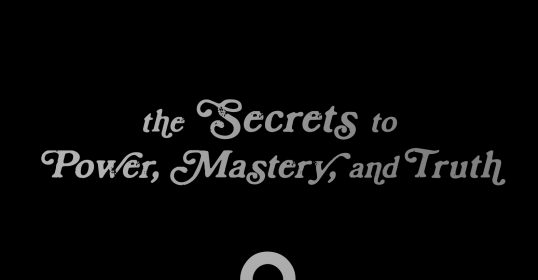 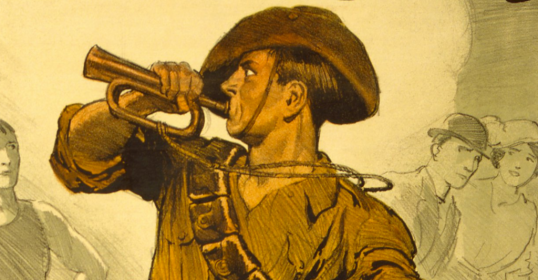