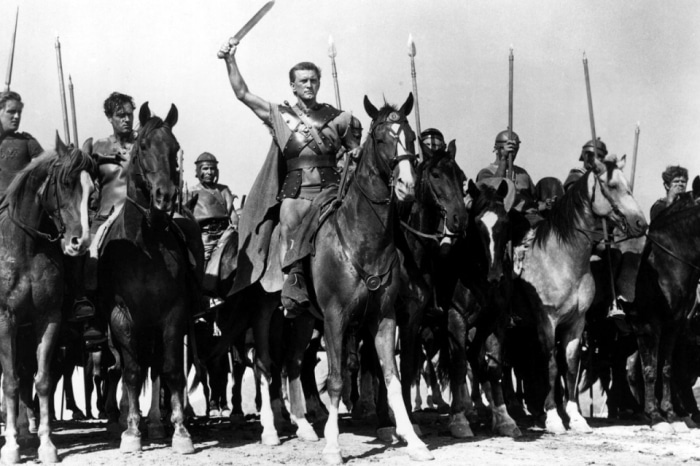 Editor’s Note: Spartacus was a Thracian by birth who was taken captive by the Roman army, sold as a slave, and trained to become a gladiator at a school in Capua owned by Lentulus Batiatus.

Tired of risking life and limb and fighting for the entertainment of the Roman masses, in 73 BC, Spartacus and a group of other enslaved gladiators plotted a rebellion and escape.

Not many historical details are known about Spartacus; the speech below was written by a 19th century author, imagining what the night of the uprising felt like, and what Spartacus said to rally his brothers-in-arms. It’s a great piece of thumos-stirring lit.

“Spartacus to the Gladiators”
By Elijah Kellogg
From The Book of Oratory, 1878

It had been a day of triumph in Capua. Lentulus, returning with victorious eagles, had amused the populace with the sports of the amphitheater to an extent hitherto unknown even in that luxurious city. The shouts of revelry had died away; the roar of the lion had ceased; the last loiterer had retired from the banquet, and the lights in the palace of the victor were extinguished.

The moon, piercing the tissue of fleecy clouds, silvered the dewdrop on the corselet of the Roman sentinel, and tipped the dark waters of Volturnus with wavy, tremulous light. It was a night of holy calm, when the zephyr sways the young spring leaves, and whispers among the hollow reeds its dreamy music. No sound was heard but the last sob of some weary wave, telling its story to the smooth pebbles of the beach, and then all was still as the breast when the spirit has departed.

In the deep recesses of the amphitheater a band of gladiators were crowded together—their muscles still knotted with the agony of conflict, the foam upon their lips, and the scowl of battle yet lingering upon their brows—when Spartacus, rising in the midst of that grim assemblage, thus addressed them:

“Ye call me chief, and ye do well to call him chief who, for twelve long years, has met upon the arena every shape of man or beast that the broad Empire of Rome could furnish, and yet never has lowered his arm. And if there be one among you who can say that, ever, in public fight or private brawl, my actions did belie my tongue, let him step forth and say it. If there be three in all your throng dare face me on the bloody sand, let them come on!

Yet, I was not always thus, a hired butcher, a savage chief of savage men. My father was a reverent man, who feared great Jupiter, and brought to the rural deities his offerings of fruits and flowers. He dwelt among the vine-clad rocks and olive groves at the foot of Helicon. My early life ran quiet as the brook by which I sported. I was taught to prune the vine, to tend the flock; and then, at noon, I gathered my sheep beneath the shade, and played upon the shepherd’s flute. I had a friend, the son of our neighbor; we led our flocks to the same pasture, and shared together our rustic meal.

One evening, after the sheep were folded, and we were all seated beneath the myrtle that shaded our cottage, my grandsire, an old man, was telling of Marathon and Leuctra, and how, in ancient times, a little band of Spartans, in a defile of the mountains, withstood a whole army. I did not then know what war meant; but my cheeks burned. I knew not why; and I clasped the knees of that venerable man, till my mother, parting the hair from off my brow, kissed my throbbing temples, and bade me go to rest, and think no more of those old tales and savage wars.

That very night the Romans landed on our shore, and the clash of steel was heard within our quiet vale. I saw the breast that had nourished me trampled by the iron hoof of the war-horse; the bleeding body of my father flung amid the blazing rafters of our dwelling.

Today I killed a man in the arena, and when I broke his helmet clasps, behold! He was my friend! He knew me—smiled faintly—gasped—and died; the same sweet smile that I had marked upon his face when, in adventurous boyhood, we scaled some lofty cliff to pluck the first ripe grapes, and bear them home in childish triumph.

I told the praetor he was my friend, noble and brave, and I begged his body, that I might burn it upon the funeral-pile, and mourn over him. Ay, on my knees, amid the dust and blood of the arena, I begged that boon, while all the Roman maids and matrons, and those holy virgins they call vestal, and the rabble, shouted in mockery, deeming it rare sport, forsooth, to see Rome’s fiercest gladiator turn pale, and tremble like a very child, before that piece of bleeding clay; but the praetor drew back as if I were pollution, and sternly said:

‘Let the carrion rot! There are no noble men but Romans!’ And he, deprived of funeral rites, must wander, a hapless ghost, beside the waters of that sluggish river, and look—and look—and look in vain to the bright Elysian Fields where dwell his ancestors and noble kindred. And so must you, and so must I, die like dogs!

O Rome! Rome! Thou hast been a tender nurse to me! Ay, thou hast given to that poor, gentle, timid shepherd-lad, who never knew a harsher sound than a flute-note, muscles of iron and a heart of flint; taught him to drive the sword through rugged brass and plaited mail, and warm it in the marrow of his foe! To gaze into the glaring eyeballs of the fierce Numidian lion, even as a smooth-cheeked boy upon a laughing girl. And he shall pay thee back till thy yellow Tiber is red as frothing wine, and in its deepest ooze thy life-blood lies curdled!

Ye stand here now like giants, as ye are! the strength of brass is in your toughened sinews; but tomorrow some Roman Adonis, breathing sweet odors from his curly locks, shall come, and with his lily fingers pat your brawny shoulders, and bet his sesterces upon your blood! Hark! Hear ye yon lion roaring in his den? ‘Tis three days since he tasted meat; but tomorrow he shall break his fast upon your flesh; and ye shall be a dainty meal for him.

If ye are brutes, then stand here like fat oxen waiting for the butcher’s knife; if ye are men, follow me! Strike down yon sentinel, and gain the mountain passes, and there do bloody work as did your sires at old Thermopylae! Is Sparta dead? Is the old Grecian spirit frozen in your veins, that you do crouch and cower like baseborn slaves beneath your master’s lash? O comrades! Warriors! Thracians! If we must fight, let us fight for ourselves; if we must slaughter, let us slaughter our oppressors; if we must die, let us die under the open sky, by the bright waters, in noble, honorable battle.”