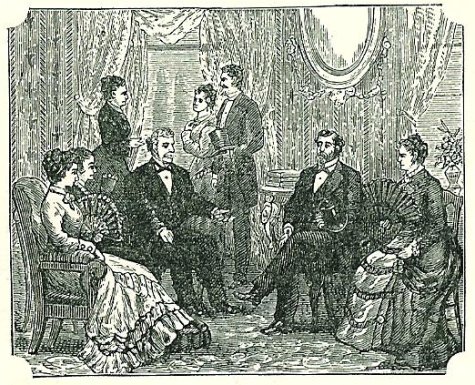 Phillip Stranhope, better known as Lord Chesterfield, was a British statesman and and man of letters. While his son was attending Westminster School, Lord Chesterfield wrote a series of letters giving advice to his on becoming a man and, more importantly, a gentleman. In this letter dated October 16, 1747, Lord Chesterfield counsels his son the art of gentlemanly conversation.

Observe carefully what pleases you in others, and probably the same thing in you will please others. If you are pleased with the complaisance and attention of others to your humors, your tastes, or your weaknesses, depend upon it the same complaisance and attention, on your part to theirs, will equally please them. Take the tone of the company that you are in, and do not pretend to give it; be serious, gay, or even trifling, as you find the present humor of the company; this is an attention due from every individual to the majority. Do not tell stories in company; there is nothing more tedious and disagreeable; if by chance you know a very short story, and exceedingly applicable to the present subject of conversation, tell it in as few words as possible; and even then, throw out that you do not love to tell stories; but that the shortness of it tempted you. Of all things, banish the egotism out of your conversation, and never think of entertaining people with your own personal concerns, or private, affairs; though they are interesting to you, they are tedious and impertinent to everybody else; besides that, one cannot keep one’s own private affairs too secret. Whatever you think your own excellencies may be, do not affectedly display them in company; nor labor, as many people do, to give that turn to the conversation, which may supply you with an opportunity of exhibiting them. If they are real, they will infallibly be discovered, without your pointing them out yourself, and with much more advantage. Never maintain an argument with heat and clamor, though you think or know yourself to be in the right: but give your opinion modestly and coolly, which is the only way to convince; and, if that does not do, try to change the conversation, by saying, with good humor, “We shall hardly convince one another, nor is it necessary that we should, so let us talk of something else.”

Remember that there is a local propriety to be observed in all companies; and that what is extremely proper in one company, may be, and often is, highly improper in another.

The jokes, the ‘bonmots,’ the little adventures, which may do very well in one company, will seem flat and tedious, when related in another. The particular characters, the habits, the cant of one company, may give merit to a word, or a gesture, which would have none at all if divested of those accidental circumstances. Here people very commonly err; and fond of something that has entertained them in one company, and in certain circumstances, repeat it with emphasis in another, where it is either insipid, or, it may be, offensive, by being ill-timed or misplaced. Nay, they often do it with this silly preamble; “I will tell you an excellent thing”; or, “I will tell you the best thing in the world.” This raises expectations, which, when absolutely disappointed, make the relater of this excellent thing look, very deservedly, like a fool.

If you would particularly gain the affection and friendship of particular people, whether men or women, endeavor to find out the predominant excellency, if they have one, and their prevailing weakness, which everybody has; and do justice to the one, and something more than justice to the other. Men have various objects in which they may excel, or at least would be thought to excel; and, though they love to hear justice done to them, where they know that they excel, yet they are most and best flattered upon those points where they wish to excel, and yet are doubtful whether they do or not. As, for example, Cardinal Richelieu, who was undoubtedly the ablest statesman of his time, or perhaps of any other, had the idle vanity of being thought the best poet too; he envied the great Corneille his reputation, and ordered a criticism to be written upon the “Cid.” Those, therefore, who flattered skillfully, said little to him of his abilities in state affairs, or at least but ‘en passant,’ and as it might naturally occur. But the incense which they gave him, the smoke of which they knew would turn his head in their favor, was as a ‘bel esprit’ and a poet. Why? Because he was sure of one excellency, and distrustful as to the other. You will easily discover every man’s prevailing vanity, by observing his favorite topic of conversation; for every man talks most of what he has most a mind to be thought to excel in. Touch him but there, and you touch him to the quick. The late Sir Robert Walpole (who was certainly an able man) was little open to flattery upon that head; for he was in no doubt himself about it; but his prevailing weakness was, to be thought to have a polite and happy turn to gallantry; of which he had undoubtedly less than any man living: it was his favorite and frequent subject of conversation: which proved, to those who had any penetration, that it was his prevailing weakness. And they applied to it with success.