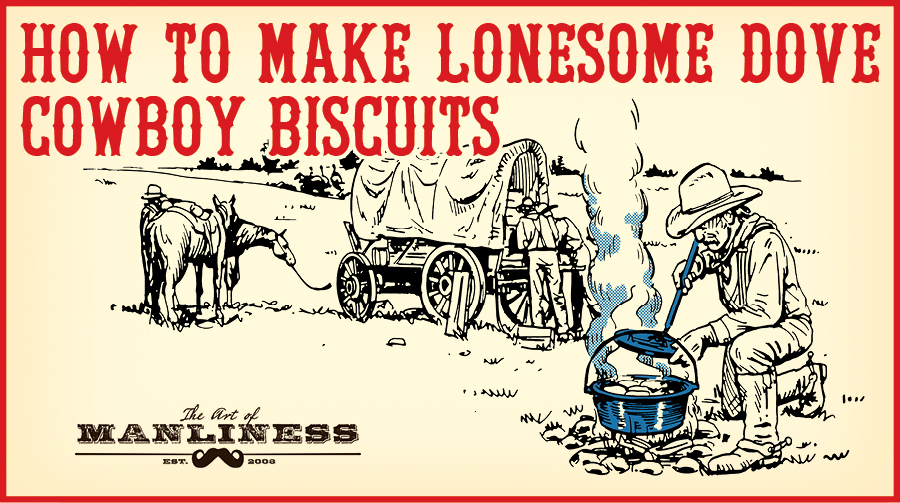 The heart of his breakfast was a plentitude of sourdough biscuits, which he cooked in a Dutch oven out in the backyard. His pot dough had been perking along happily for over ten years, and the first thing he did upon rising was check it out. The rest of the breakfast was secondary, just a matter of whacking off a few slabs of bacon and frying a panful of pullet eggs. —Lonesome Dove

I recently had the immense pleasure of reading Larry McMurtry’s epic and masterful Lonesome Dove. I have to agree with Brett, my grandfather-in-law, and many others who note it as a lifetime favorite read that they’ll return to again and again.

In addition to the story’s epic narrative arcs, part of what makes the book so compelling are the vivid descriptions of cowboy life at the close of the Old West. As a home bread baker, one of the details that stood out to me the most was Augustus McCrae’s famous sourdough biscuits. He made them every morning for the Hat Creek crew (a group of Texas Rangers on a cattle drive), and kept his sourdough starter alive for over a decade. If you’re a baker, you know how impressive that is. And upon some further research, I came to discover that his concoction was fairly common for cowboys back in the day (and still is among the ranchers who continue to operate). I had to find a way to make some cowboy-style sourdough biscuits of my own, so I got to work experimenting.

Generally, biscuits are a little bit involved — the dough is made with baking powder, baking soda, and/or yeast and has butter cut into it, and the biscuits are cooked on a baking sheet in the oven, coming out super fluffy and flakey.

That’s not a cowboy biscuit. First off, sourdough is utilized for substance, rising, and flavor. Sourdough is self-sustaining, so it’s perfect for a cattle drive. Cowboy biscuits are also cooked not in a standard oven, but in the Dutch variety, often over the hot coals of a morning cooking fire. And instead of mixing butter (or lard) into the dough, we’re just using it to grease the oven, so the biscuits turn out more dense and cake-like than fluffy.

Below you’ll find my recipe for making Gus McCrae’s sourdough biscuits. You’ll notice a few modern liberties were taken; McCrae was a man of leisure and convenience, so I believe he’d approve. 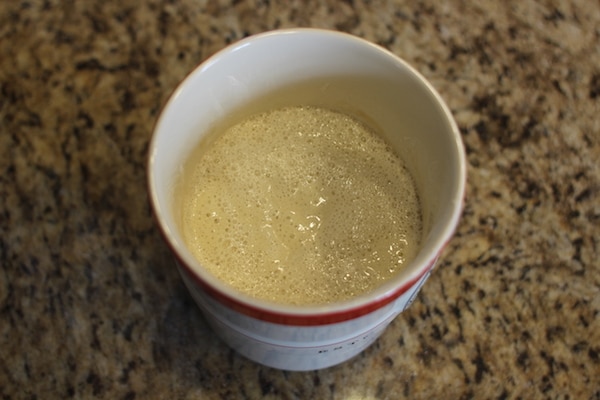 Now, there are whole books written about sourdough. If you’ve never baked before, you probably don’t want to start with this recipe. Having some knowledge at the outset will be a great help. For the uninitiated, sourdough starter is basically a living ball of flour and water that’s used as a natural riser for any sort of bread product. Rather than using store-bought yeast, you use this. The starter requires regular “feeding” of flour and water (yeast is a living organism, remember) and can be maintained for decades, à la McCrae. How often it needs feeding depends on how often you’re using the starter. Augustus was feeding his every day, since it was being used every day. Mine gets fed once a week or so, the night before being used in a recipe.

How do you get it going? I was given a King Arthur Sourdough Starter last Christmas that’s been super easy to use and maintain. Some folks consider that cheating. I don’t. If you want to truly start from scratch, Tartine Bread is considered the master class on the topic.

Once you have a healthy sourdough starter that you’re comfortable with, proceed to the rest of this recipe.

This should get you 7 biscuits or so. That’s enough for a single cowboy who shares McCrae’s legendary appetite. For most, it’s enough for 2-3 cowpunchers, especially if served with bacon and eggs. 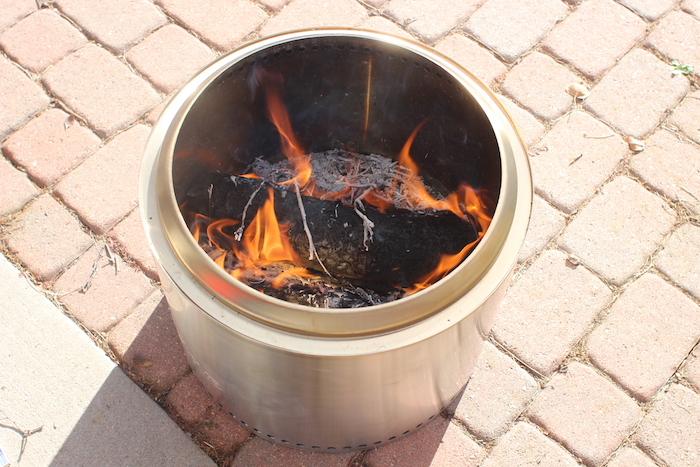 If you’re harnessing the true spirit of McCrae and cooking over a fire, get it started before mixing your dough. When using fire to cook rather than just to sit around and enjoy, you actually want to utilize hot coals and embers versus large flames. So get things going, let the flame actually die down a little bit, and let your logs turn into piping hot, simmering embers. This took me 15-20 minutes, and just a single large log with several smaller branches.

If using a conventional oven, now is the time to preheat to 400 degrees F. 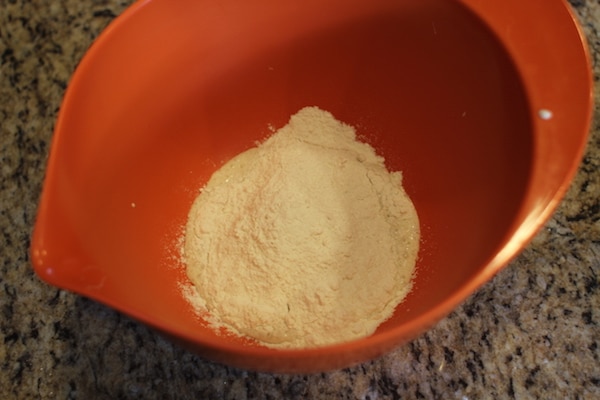 Throw it all in a mixing bowl and whisk together. 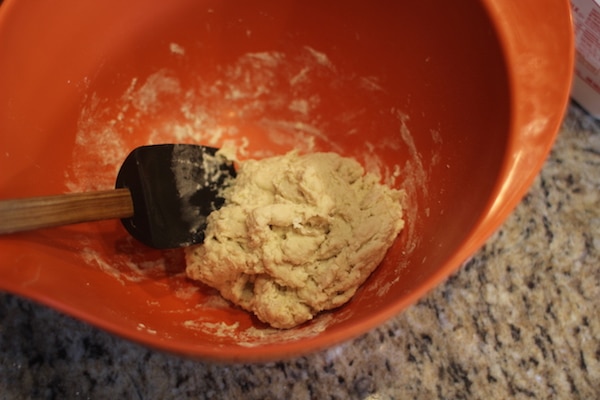 Add your 1/4 cup of milk, and using a spatula, mix it all together until it forms a chunky dough. Then, use your hands to knead for a few minutes until it comes together as a single, mostly smooth ball of dough.

4. Turn Out and Pat Down 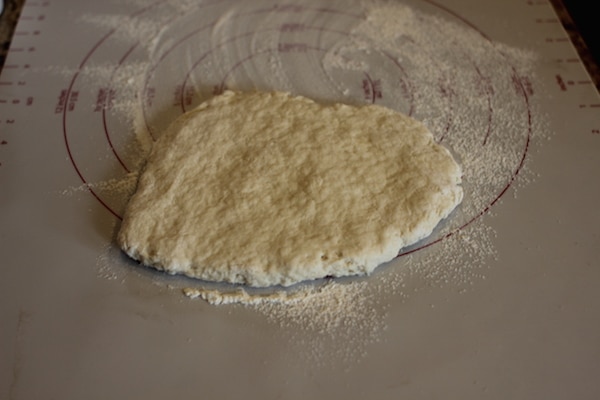 Turn out the dough onto a floured counter (or baking mat, as seen above), and pat it into a roughly round shape, about 1/2″ thick. 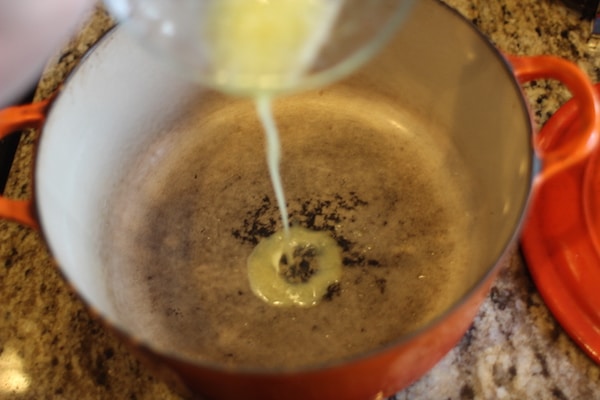 Melt a tablespoon of butter and pour it onto the bottom of the Dutch oven. Spread around to be sure the bottom is evenly coated.

6. Cut Biscuits and Place Into Oven 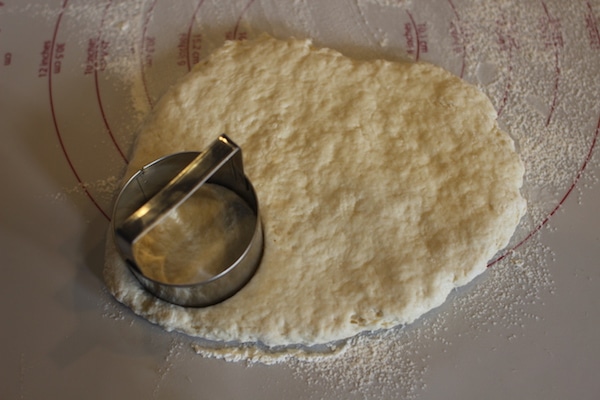 Use a biscuit cutter to create your biscuits, or a pocket knife if you’re feeling particularly like a cowboy. After you’ve done as many as you can with your round of dough, put all the scraps together and roll it out again with your hands. (I was able to get 7 biscuits from this recipe.) Put your biscuit rounds into the greased oven. 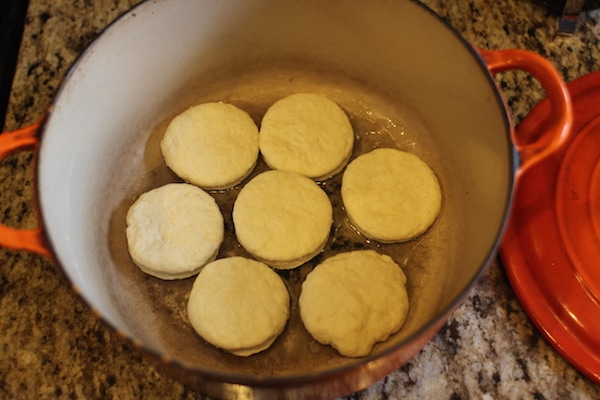 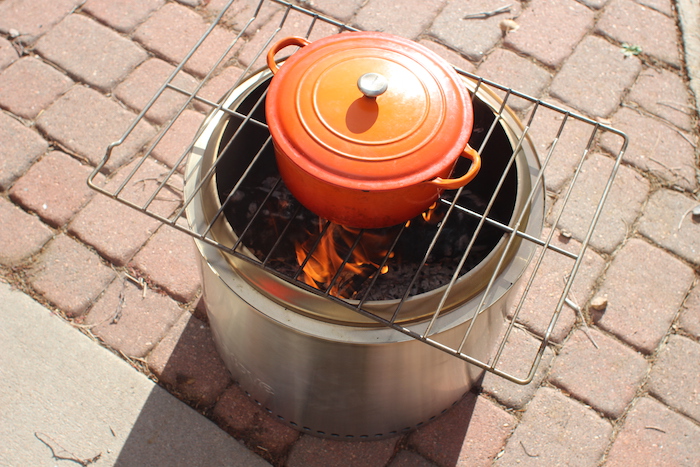 I put an oven grate right on top of the Solo Stove, and it worked perfect.

If cooking over a hot fire, you’ll only need 15-20 minutes; if cooking in the oven, give it 30-35 minutes. Consider flipping the biscuits halfway through so both sides get a nice, crispy butter coating, but it’s not strictly necessary. 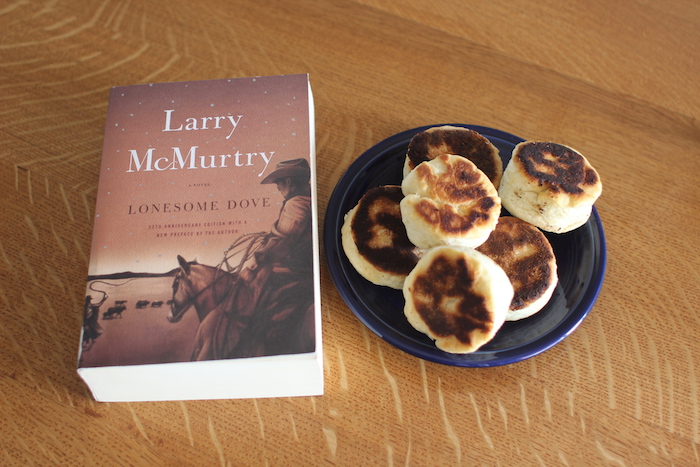 Serve warm; as with all biscuits, they’re not nearly as good the next day, or even a few hours later. This is especially true since this is a more dense biscuit than you’re used to. Literally, get ’em while they’re hot! When you split open a biscuit, give it a hearty whiff; the smell of warm sourdough will transport you right to the plains of Texas, if you’re not there already!