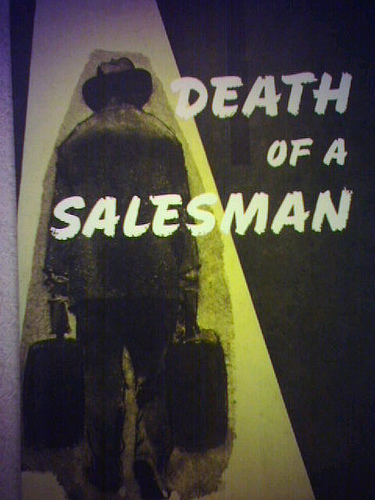 Occasionally, the Art of Manliness runs a series called “Lessons in Manliness.” They are an attempt to glean important life lessons from successful and inspiring men. Today, we’re going to do something a little different. We’re going to look at a man who was a paragon of unmanliness. The hope is that we can learn from his mistakes and not repeat them ourselves.

This first profile in unmanliness takes a look at traveling salesman, Willy Loman from Arthur Miller’s play Death of a Salesman. Death of a Salesman explores the world of post-war America and the effect that America’s new found prosperity had on men. During the 1950s, men began to feel pressured to not just provide for their family but to also give them the luxuries that society was coming to believe every household was entitled to. Every family deserved a house with a picket fence, a new car in the garage, and all the newest appliances to make life easier. Advertisers pitched the idea that the American dream was in reach of every man. Yet the reality then, as it is now, is that strenuously reaching to keep up with the Joneses can stretch a family perilously thin. Unfortunately, Willy Loman bought into the idea and he let it destroy him and his family. There’s nothing wrong with wanting to provide nice things for your family; Willy just went about it all wrong. Here are a few lessons we can take from Willy on how not to be man.

Success doesn’t come from just luck, popularity, or personality. All throughout the Death of a Salesman, Loman tells his two sons, Biff and Happy, that the key to success in life is to be “well liked” and that all you need is “a smile and a shoeshine.” According to Willy, if you can become popular and get people to like you, you’ll have it made in life. The other part of Willy’s success equation was dumb luck; he thought men just stumbled into success the way his brother apparently came into his diamond fortune in Africa. But this philosophy simply sets Willy and his sons up for failure. Good luck and being well liked will only get you so far in life. The true lynchpin of success is tireless ambition and hard work. Neither Willy nor his sons ever learn this, and they are consequently failures at the game of life. Don’t be superficial like Willy; put you shoulder to the wheel.

Luxuries aren’t worth taking on debt. Willy wanted to give his family the best in life. He wanted his wife to have a refrigerator, a vacuum cleaner, and a car. There’s nothing wrong with such a desire. The problem is that Willy took on massive amounts of debt to buy these things. His debt load was so crushing that he decided to kill himself so his family could have the insurance policy to pay for it all. Avoid debt like the plague. Sure, some debt is necessary in the form of a mortgage or student loans. But having the latest gizmo is not worth the financial and emotional stress that comes with consumer debt. A man should seek to be independent and self-reliant. Debt will only get in the way of that goal.

Don’t live in the past. As the play progresses, Willy begins to retreat more and more into the past. He daydreams about a happier time when his sons loved him and he was a success at work. As he mulls over the past, Loman tries to figure out how things went wrong. Usually he pegs not being “well liked” as the root of his current troubles. Willy is like that former jock who has done absolutely nothing with his life since his glory days on the high school gridiron. Their best days are always behind them. Living in the past won’t get you anywhere. We should always learn from it, but our focus should be on the present and future.

Stay faithful to your wife. During Willy’s sales trips to Boston, Willy begins to have an affair with a character known only as “The Woman.” His son Biff goes to visit Willy in Boston and catches his father in his adultery. In one of the most powerful scenes, Biff confronts Willy about buying The Woman new stockings instead of buying them for his wife. To Biff, the idea that Willy would treat some stranger better than his poor family back at home is the ultimate betrayal. After Biff’s encounter with his father and his harem, Biff loses all interest in school and fails math, thus setting him up for failure down the road. Adultery is an ugly, ugly thing. It can destroy your family. A manly man is faithful to his wife and devoted to his family. Do all you can to affair proof your marriage.

Running from your problems won’t solve them. Ultimately, it is Willy Loman’s denial of reality that leads to his downfall. He makes his sons lie to him so he doesn’t have to face the truth. And in the end, Willy chooses to escape from reality altogether by killing himself. He figures that the only way he can be of any worth to his family is if he dies, and they get the insurance policy. Instead of facing his problems, he runs from them. Sure, his death allows his wife to pay off the mortgage, and she says that her family is free. Willy does become sort of a sacrificial lamb for his family. But he has forever robbed his wife of a husband and his sons of a father. He could have solved these problems without killing himself if he had confronted them head on.  Don’t shirk the responsibilities of your decisions, no matter how serious the consequences. Be a man of honor and confront your problems directly.

Note: If you haven’t read or seen Death of a Salesman, check it out. Very good. The film adaptation starring Dustin Hoffman and John Malkovich is wonderful.