Getting in a car accident is no fun. I can still remember my first (and only!) accident. It happened just a few weeks after I turned 16. Rear-ended a guy. My small, but noble Isuzu Hombre was no match for the other guy’s giant Ford F-150. The front end of my comparatively small pick-up was swallowed underneath the rear bumper of the truck I hit. While he had just a few dings, my vehicle was totaled.

I remember getting out of my truck feeling sort of shell-shocked. I made sure the other person was okay and was relieved to find out that I hadn’t maimed or injured anyone.  By then, my friends who had been driving behind me arrived at the scene of the crash. They tried to console me, but all I did was pace back and forth, pointing at my car and yelling “MY CAR IS SCREWED!” over and over again like a crazy man. Not my finest moment. My friends thought it was the funniest thing in the world, however, and still rib me about it.

I had no clue what I was supposed to do in a car accident, but I knew someone who did: dear old Mom. I called my mom on my 1999 Motorola MicroTac (eat your heart out Zach Morris), and she was on the scene in no time flat, ready to basically take care of things for me.

But what would have happened if I had gotten in the accident when I was a few years older and hundreds of miles away from home at college? Would I have known how to handle the situation correctly without Mom and Dad? Probably not.

To avoid pulling a Brett and going crazy when you get in an accident, read this article and prepare yourself.

Note: This advice applies to accidents when it is obvious you are not seriously injured. If you are, call 911 immediately, or if you cannot, hope that someone else will, and wait for the ambulance to arrive. 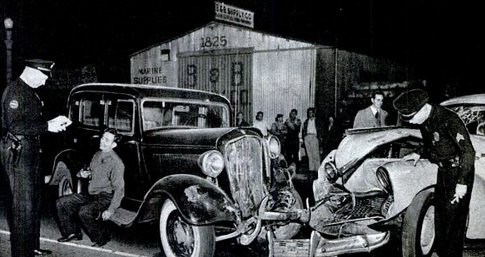 1. Stay calm. Now is not the time to lose your cool. Keep your wits about yourself.

2. Safety is your top priority. Your first priority is to maintain the safety of everyone involved in the accident and to take actions to prevent more smash-ups and injuries. If the accident is minor and the cars are still functioning, move them off or to the side of the road.

If the cars aren’t going anywhere without a tow truck, turn on your hazard lights, exit the vehicle when it’s safe to do so, and walk to the side of the road and out of traffic. Ideally, you should have a warning triangle or flares in your car’s emergency kit. Place those on the road to give other drivers a heads up on the accident. You don’t want another car plowing into your pile-up.

3. Check for injuries. Ask everyone who was in the car with you if they’re okay. Then check on the driver and passengers of the other car. Call 911 for an ambulance if needed.

4. Call the police. After an accident, the other person involved might suggest not calling the police and settling things between just the two of you. Ignore him and call the police, even if it’s just a minor fender bender. Here’s why:

By law, you may be required to call the police. In most states, you’re only required to call the authorities after a car accident if someone has been injured, the accident is blocking traffic, or property damage (including cars) is above a certain monetary amount. Failure to comply with the law could result in an additional fine, so don’t try to judge for yourself if those requirements have been met. Let the police dispatcher decide that. After you’ve described the accident to the dispatch, they may or may not decide to send officers to the scene. If they don’t, they’ll usually tell you to file an accident report at a station or online.

A police report can help establish liability. The insurance companies of the respective drivers will work together to determine fault. One of the most credible documents the insurers will use in doing so is an official police report. Without a report, figuring out liability becomes an issue of he said/she said. If you were the one hit, you definitely want a police report. I know a few instances where people didn’t call the police after an accident, and ultimately regretted not doing so. Those involved exchanged information, but when the drivers who were hit called the offending drivers’ insurance companies to make a claim, the offending drivers denied the whole thing and accused the victim drivers of insurance fraud. That wouldn’t have happened with a police report.

Even if the police don’t come, file a report as soon as you can. At least you’ll have your side of the story on record. That can help in the insurance claim.

Individuals who stage accidents in order to fraudulently collect insurance money will often suggest not calling the police and just exchanging information. But even if the accident is minor, call the police. Officers are trained at detecting staged accidents. Having them at the scene can help expose the fraud so you’re not held liable for what happened.

Having the police on the scene can keep everyone calm and collected. Emotions can run high at an accident. Having the police there to act as an impartial referee can ensure that things don’t get too heated.

Bottom line: call the police no matter what. If the accident is a minor one, don’t call 911, just call the police directly (you might want to program this number into your phone).

Before the officer leaves, get his name and badge number

You should always have a pen and notebook in your car, so you can write down the details we mention above and below. Alternatively, many insurance companies now offer extremely useful apps that not only allow you to record the details of the accident, but also have features which help you “draw” the scene of the accident, take photos, collect witness observations, jot down notes, and file a claim.

7. Take plenty of pictures. Use the camera on your cellphone to document the vehicle damage. The more pictures the better. Keep in mind that you want your photos to show the overall context of the accident so that you can make your case to a claims adjuster. Take pictures from a distance to show the accident in its entirety, as well as pictures up close to show property damage. If there are any skid marks, take pictures of those too. If you think you were responsible for the accident, take pictures of the car you hit from the rear, front, and sides. That way, if the driver accuses you of causing damage to his car that existed prior to the accident, you’ll be able to prove he’s lying.

8. Get witness information. If there are witnesses, try to get their information including their name, address, and phone number. Their observations can help your case in assigning liability.

9. Don’t admit fault or assign blame. Even if it’s obvious whose fault the accident was, don’t ever admit fault or assign blame. That’s for the police and insurance companies to figure out. While it may pain your inner-gentleman  to do so, don’t say “I’m sorry.” It’s an admission of fault. As soon as you exchange information with the driver and find out he or she is okay, zip your lip and keep discussion to a minimum. You don’t want to say anything that could be used against you during the insurance claims process or police report. The only people you want to talk to about the accident are the police and your insurance company.

10. Call your insurance company. Regardless of fault, call your insurance company and report the accident as soon as possible. If it is your fault, your policy likely requires that you do so. Calling your insurer to report the accident also ensures you get your side of the story on record before the other driver files a claim. That can put you at an advantage in reducing the amount the other driver claims.

After you’ve called the insurance company, everything else sort of takes care of itself. You’ll likely be told what shop to take your car to. If you need a car while yours is getting repaired, the insurance company will pay for it. Barring any injuries, your life will likely go back to normal soon enough.

What Should I Do If I Hit a Parked Car?

You’re driving in the parking lot and in a moment of carelessness you run into an unattended parked car. While it may be tempting to just hightail it out of there and let no one be the wiser, you should try to find the owner or at least leave a note for two very good reasons. First, it’s just the right thing to do. You made a mistake that damaged someone’s property, so you should shoulder the responsibility of getting the car repaired.

Second, you’re required by law to find the owner or at least leave a note. Hitting an unattended parked car and leaving the scene without contacting the owner or leaving a note with your information constitutes a hit and run violation. If you were tracked down somehow (which gets easier and easier, especially with parking lot cameras and witnesses with smartphones), you’d likely face a heavy fine for leaving the scene of an accident on top of having to pay for the damages you caused when you hit the car.

So what’s the protocol if you a hit an unattended parked car?

First, get out and assess the damage. If you totally smashed the car, you should probably go ahead and call the police. But if it’s just a fender bender or busted taillight, there’s no need to call the cops.  With your cellphone camera, take lots of pictures of the front, sides, and rear of the car you hit. You don’t want the owner trying to milk you and your insurance company for damages you didn’t cause.

Tags: Heading Out on Your Own
Previous Next