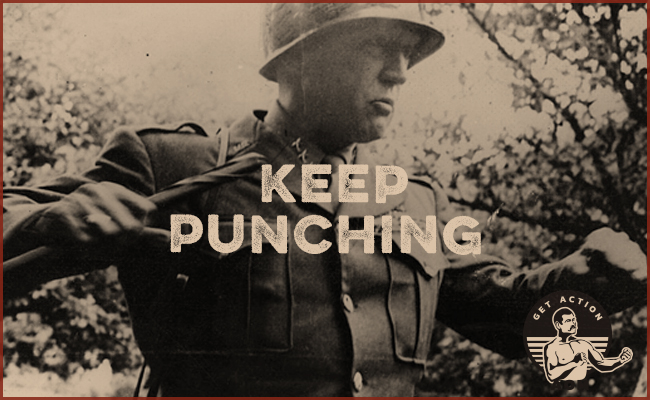 The heart of General George S. Patton’s martial strategy centered on aggressive, energetic advancement: a focus on ceaseless drive; a belief that “There would be time to rest when the war was over.” Not only was retreat out of the question, so was even staying in place. “My motto in battle,” he said, “is GO FORWARD!”

Patton had two main rationales for his “always be audacious” tactical philosophy.

First, forward movement — making a big, relentless push until you achieved your objective — saved time and energy, and most importantly, reduced causalities. The more steadily you advanced, the more rapidly the enemy retreated, and the less fighting you had to do. The shorter the exposure to combat, the shorter the duration of action, the shorter the bloodshed. For Patton, taking measured steps, proceeding in fits and starts, would not win the battle; you had to go all in; there was no sense trying to save something for the way back:

I could see no reason for hoarding ammunition. You either use it or you don’t. I would lose more men by shooting nine thousand rounds a day for three days than I would by shooting twenty thousand in one day—and probably not get as far.

It wasn’t just that pushing forward pushed the enemy back; it kept him from coming back. Once you had him on the ropes, it was time to finish him off. As Patton declared as he approached the Rhine River during WWII:

Every day we save means saving hundreds of American lives. The enemy is in chaos on our front. But if we delay 72 hours, he will reorganize, and we’ll have to fight to push him out of the way. We must not give him that chance, regardless of what political machinations are going on up above. I don’t propose to give the Hun the opportunity to recover from the killing we’ve just given him. We destroyed two armies in one week with a handful of losses to ourselves, and I don’t propose to give the bastards the chance to reorganize on the east bank. I owe that to my men.

We’re going to make a crossing at once. I don’t care how or where we get the necessary equipment, but it must be got. Steal it, beg it, or make it. But I want it, and it had better be where we need it, when we need it. We’re going to cross the Rhine and we’re going to do it before I’m a day older.

To ensure control of the territory you were after, Patton thought it important to not only approach the finish line, but to make an extra push past it. During the war, a corps commander reported to Patton that he had achieved the objective of reaching the Selune River, but the general realized he had halted along its first bank. Patton ordered the commander to cross over its waters, explaining that “throughout history, many campaigns had been lost by stopping on the wrong side of the river.”

The second reason Patton stayed on the offensive is that it boosted the morale of the men. Soldiers want to do something heroic and glorious, he believed, and such moments didn’t come when you were waiting around for the other guy to attack. So too, becoming a moving target by firing on the march reduced the accuracy of the enemy’s artillery, and increased the men’s confidence. Constant advancement also kept himself and his commanders from getting too comfortable; he and his leaders stayed in trailers, rather than commandeering chateaus, so that they wouldn’t be tempted to settle in and become reluctant to move on. Bodies that stay in motion, Patton understood, remain in motion.

Patton not only prioritized offense, he was utterly uninterested — and in fact detested — its opposite, believing that “No form of defense is worth a damn.” Surveying history, as well as the tactics of the contemporary Germans, proved, he said, “that people who build walls or ditches or pillboxes, or think that the ocean can defend them are gullible fools.”

Patton rarely allowed even his own troops to dig trenches, feeling they offered little real protection, wasted energy in their construction, and became a psychological morale sapper; burrowing underground sent the message to soldiers that the enemy was to be feared, thereby diminishing their courage during offensive assaults. “An army is defeated when it digs in,” the general opined.

When ordered to take a defensive position, Patton would ostensibly comply by adopting an “active defense” or “creeping defense” — continuing to move his troops forward, just at a slower pace. In disobeying orders, the general risked his career, but felt that his ultimate success would vindicate him.

Patton not only scorned putting his troops on defense, he wouldn’t even let them stand still. Before the Third Army was set to invade Europe, he declared:

I don’t want to get any messages saying, ‘I am holding my position!’ We’re not holding anything. Let the Hun do that. We are advancing constantly and are not interested in holding anything, except onto the enemy. We’re going to hold onto him and kick the hell out of him all the time.

Speed and aggression didn’t mean recklessness, however. Patton did reconnaissance before moving ahead. He got the right support pieces in place first. He formulated a plan (and a back-up plan). It’s just that he didn’t let the sure knowledge that his plan would never unfold exactly as conceived, prevent him from putting it into action. He was prepared to adapt on the fly, saying, “one does not plan and then try to make circumstances fit those plans. One tries to make plans fit the circumstances.”

Put another way: “a good plan violently executed now is better than a perfect plan next week.”

Patton’s strategy of constant advancement is summed up well in the order of the day he issued for the Seventh Army on the eve of their invasion of Sicily:

Remember that we as attackers have the initiative. We must retain this tremendous advantage by always attacking rapidly, ruthlessly, viscously, without rest. However tired and hungry you may be, the enemy will be more tired, more hungry. Keep punching.

19 Stars: A Study in Military Leadership and Character by Edgar Puryear 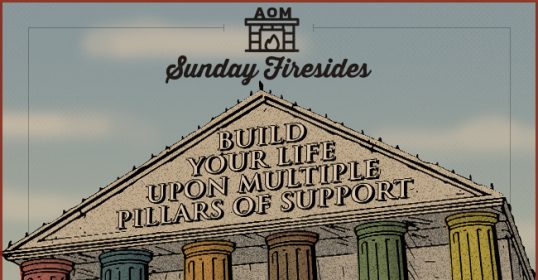