From a very early age, George S. Patton had one overarching aim: to become a great and glorious combat commander. Becoming a military leader wasn’t just a goal, he felt, but his absolute destiny. Having descended from a long line of dashing and brave warriors, Patton literally felt these ancestors watching him, and desired nothing more than to make them proud and to live up to his lineage.

There was just one problem. Young George felt himself lacking in both martial and mental aptitude.

As a boy Patton could be timid and sensitive, and worried that he was cowardly. And though bright and energetic, he struggled with what would today be called dyslexia and ADHD. The words on the printed page appeared jumbled up to him, and reading and spelling came with great difficulty. Having to recite something or write on the chalkboard at school became episodes of severe humiliation for Patton, who absorbed his classmates’ taunts into his own self-perception. “I am either very lazy or very stupid or both,” he said as a young man, “for it is beastly hard for me to learn and as a natural result I hate to study.”

As a cadet at West Point, Patton continued to struggle with his studies, and had to repeat his first year after failing mathematics. He could sometimes be beset by an “overpowering sense of my own worthlessness,” and the fact he had to work far harder than his more lackadaisical peers simply to achieve average results (he would graduate 46 out of 105), was a source of great frustration; there was, he wrote, “no one in my class who so hates to be last or who tries so hard to be first and utterly fails.”

Patton saw these weaknesses not as insurmountable obstacles to achieving his aim, however, but as challenges to be overcome. He committed himself to always doing his best, always doing more than what was required of him. By sheer dint of will, he would transform himself into the consummate warrior.

To gain the rough and ready constitution he would need to become a battlefield commander, Patton built and tested his body — becoming a football player, track star, expert swordsman, and Olympic pentathlete. And he embraced “the mask of command” — the act-to-become principle; by intentionally exposing himself to risk and danger, and acting like he felt cool, calm, and courageous, he became such.

To allow his intelligent mind to live up to its potential, he focused on his reading ability until he became more fluent. Though studying began as a chore, it eventually became a passion.

Becoming an avid reader would in fact help give Patton the confidence to change the other aspects of himself which needed work; realizing he could overcome his difficulties with books made him realize he could remake any other aspect of his nature he wished.

Patton’s hard-won love of reading would not only have an indirect impact on his leadership; the development of his prodigious physical and mental library would ultimately become a central key in his mastery of the art of warfare. 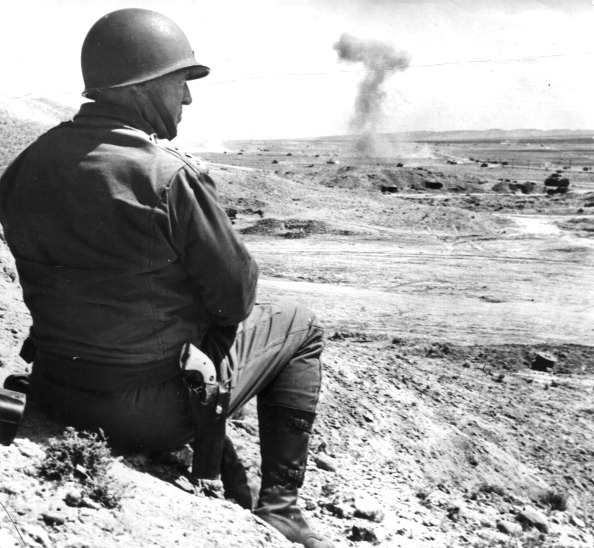 When you think of General George S. Patton, you probably think of his dramatic appearance — shiny helmet atop his head, ivory-handled Colt revolver tucked in his pants, “swagger stick” in hand, scowl upon his face. You likely think of his bombastic, profanity-laden speeches, filled with pithy maxims like “it is fine to be willing to die for your country but a damned sight better to make the German die for his.” You probably think of a man nicknamed “Old Blood and Guts,” arguably the greatest combat general of modern times.

What you probably don’t think of is a voracious, meditative reader. But you should.

In addition to his rough, tough, and extroverted public side, Patton also had a very gentle, introspective, and thoughtful private side. And part of that included nurturing a lifelong love affair with books. As his biographer, Martin Blumenson, observes, “He jumped from vulgarity to scholarship as nimbly as a cat.”

Patton’s appetite for reading was nurtured from a young age. His whole family loved books, and he and his sister and parents would not only read aloud to each other, but also act out their favorite tales. Patton grew up reading and taking on roles in the Iliad and the Odyssey, Shakespearean plays, Bible stories, and stirring tales by Sir Walter Scott, Rudyard Kipling, Arthur Conan Doyle, and G. A. Henty. These texts offered Patton inspiration on adventure and heroism, as well as insight into human drama, emotions, and conflict.

As Blumenson writes, young George also studied “the lives of the great leaders of antiquity”:

“They imbued in him the importance of character. Those who made moral choices succeeded, he learned, while those who sacrificed honor for expediency failed and merited disgrace.

Historical figures instructed him in the military profession. Scipio and Hannibal in North Africa showed a thorough grasp of soldiering, along with personal courage and the intuition to be at the critical place at the crucial moment. Caesar to his Tenth Legion in Gaul, Joan of Arc at Orleans, Napoleon to his Army of Italy provided personal and dynamic leadership, together with direct inspiration that touched every man under arms. Stonewall Jackson gave his followers the willingness to go beyond the limits of endurance and to accept risks and the prospect of disfigurement and death. These commanders who exhibited self-confidence, enthusiasm, and bravery became his models, and he absorbed their genius.”

Patton’s reading of history not only refined his character, but deepened his dedication to becoming a great warrior; he didn’t just want to live up to the standards set by his own forefathers, but those of eminent figures from the past as well. His reading also enflamed the sense of destiny that surrounded his dream; in fact, Blumenson explains, Patton’s reading “induced in him a strain of mysticism, a sense of déjà vu, an acceptance of telepathy, and a belief in reincarnation, the feeling that he had lived before in other historical periods, always as a soldier—a Greek hoplite, a Roman legionnaire, a cavalryman with Belisarius, a highlander with the House of Stuart, a trooper with Napoleon and Murat.”

While at West Point, Patton continued to dive into the classics and the biographies of great men. History easily became his strongest subject, and he was a particularly dedicated student of the Civil War, slowly studying Douglas Freeman’s epic four-volume biography of Robert E. Lee, as well as the life stories of the conflict’s other generals.

Patton never read passively, but instead memorized his favorite passages and had a vigorous conversation with his books, marking up the text with copious marginalia and noting places he agreed or disagreed with the author’s view. If he found a tome particularly compelling, he would type up his notes on 3X5 index cards. He also kept a pocket notebook for writing down reflections, pithy military maxims, rules of warfare, and observations on past battles. His first entry in the notebook read: “Do your damdest always.”

After graduating from the Academy, Patton furthered his education, both formally — attending the Army Command and General Staff College and the Army War College for graduate-level instruction — and through his own personal studies. His reading continued to be focused on biography and military history; believing you had to understand the past to navigate the present, and almost fanatically devoted to learning his profession inside and out, he read nearly every piece of martial-related material he could get his hands on — including training notes, after-action reports, operational histories, and even every citation for bravery he could find.

Patton would also read books that offered insight into the history and current cultures of the countries (and the leaders) with which the U.S. might find itself at war, in order to better grasp the potential enemy’s mindset. As he told his nephew:

“I have read the memoirs of [our enemies’] generals and political leaders. I have even read his philosophers and listened to his music. I have studied in detail the accounts of every damned one of his battles. I know exactly how he will react under any given set of circumstances. He hasn’t the slightest idea what I’m going to do. Therefore, when the day comes, I’m going to whip the hell out of him.”

Patton was one of the few Americans to read Lenin, Marx, the Koran, and Hitler’s Mein Kampf, “believing,” his wife explained, “that one can only understand Man through his own works and not from what others think he thinks.”

During WWII, Patton made sure he’d be able to continue his reading in the field by carrying a small library with him wherever he went. This field library included the Bible (which he read religiously, in both senses of the word), a prayer book, Caesar’s commentaries, and a complete set of Kipling’s works, which may have included as many as 38 volumes.

As a result of Patton’s lifetime of reading, he had an encyclopedic knowledge of strategy to draw from in leading his troops. He knew what other commanders had done in similar circumstances; he knew the different options available to him and how such options had fared in the past. As he said:

“In order for a man to become a great soldier . . . it is necessary for him to be so thoroughly conversant with all sorts of military possibilities that when ever an occasion arises he has at hand with out effort on his part a parallel. To attain this end . . . it is necessary . . . to read military history in its earliest and hence crudest form and to follow it down in natural sequence permitting his mind to grow with his subject until he can grasp with out effort the most abstruse question of the science of war because he is already permeated with all its elements.”

While Patton continued to feel inadequate at times throughout his life, stemming from his learning disabilities, he always publicly acted with great confidence, and it was largely his prodigious knowledge base that gave him a sound reason and the self-assurance to do so. He knew more about the art of war than anyone else, and he knew he knew it.

While Patton was widely read and accumulated a vast library, after his death his wife compiled the following list (included in The Leader’s Bookshelf) of his very favorite books:

Interested in learning about what other military commanders have read to develop their leadership? Listen to my podcast with Admiral James Stavridis, author of The Leader’s Bookshelf: