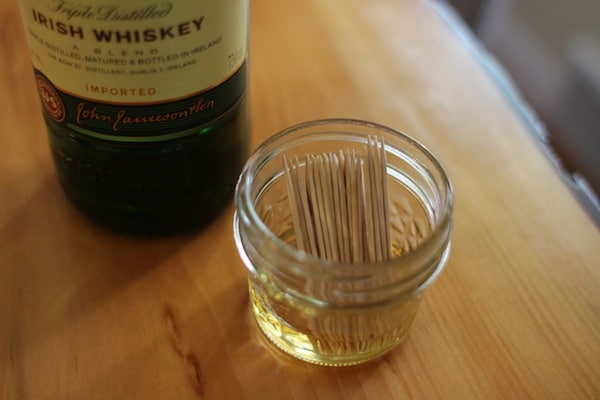 Since literally the dawn of man, toothpicks have been used as a tooth-cleaning device. With the advent of tooth-brushing and flossing, however, toothpicks fell out of favor as a tooth cleaner, but were held onto (primarily by men) as simply a small wood stick to chew on. It became a rugged habit for men, making appearances in old Westerns as well as new action movies, signifying to the viewer that the man you’re watching is a badass. Perhaps they are favored by the tough guy because he is so full of fury, he needs to wedge a stick in-between his chompers to keep them from grinding together.

While chewing on toothpicks is enjoyable on its own, you can make it an even better experience by flavoring them. While flavored toothpicks have started to show up in retail environments, they’re going to be far more expensive than just making them at home. Put on your cowboy hat and follow the tips below! 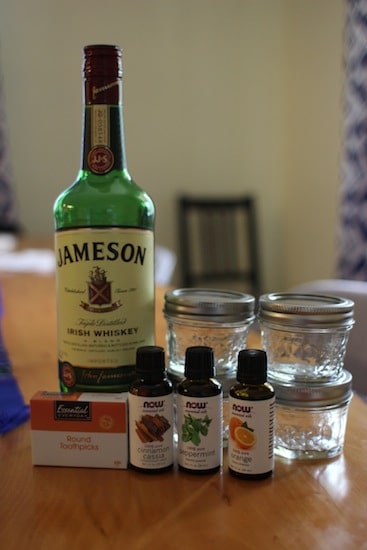 You can use any whiskey you’d like, but I wouldn’t use expensive stuff. It’s not a waste necessarily, but certainly not the best use of your fancy bottle of Scotch. As for other flavorings, using essential oils is going to be your best bet. Essential oils are concentrated natural extracts of plants, using a distillation process. They provide better coverage, and don’t make the toothpick soggy. Theoretically any liquid will work, but you may compromise the integrity of the toothpick. I got these 1oz bottles at GNC for $4-6 each, and for this how-to I used Cinnamon Cassia, Peppermint, and Orange. The sealed container isn’t necessarily a must-have either, but I’ll explain below why I prefer it. 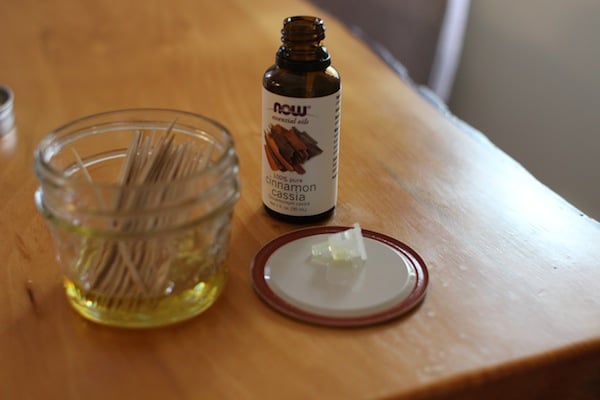 If using an essential oil, be sure to take off the drip spout (the plastic cap you can see lying on the lid of the jar). You really don’t need much — just enough for the tips of all your toothpicks to be in the liquid. You may think you need to cover the whole toothpick, but it acts as a straw, sucking the liquid up into itself over the course of a day or two. 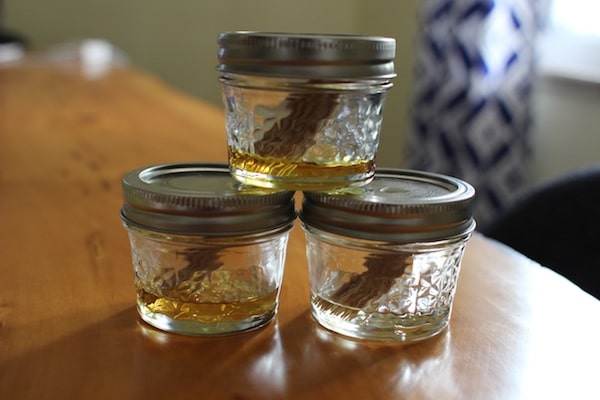 Seal your jars – as it really locks in and concentrates all those vapors. The dish that I didn’t cover (see below) made my whole office smell strongly of oranges. While not unpleasant, it was quite potent after a few hours. Remember, these are concentrated oils (with the exception of the whiskey, of course), so they’re strong.

Interlude: Don’t Use a Shallow Dish 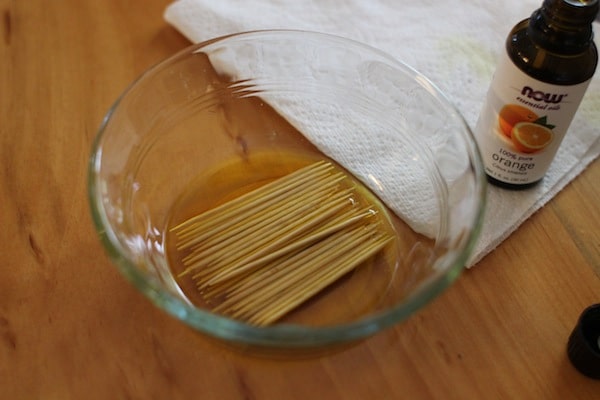 I had seen elsewhere that you could just use a shallow, uncovered dish for “marinating” your toothpicks with full coverage versus just the tips. While it provides a fine end product, it’s far messier (you are dealing with oil, remember) and uses much more of a fairly expensive product to begin with. With the dish, I had to use almost half the bottle in order to completely cover the toothpicks, versus just a quarter of the bottle when soaking the tips in small jars. 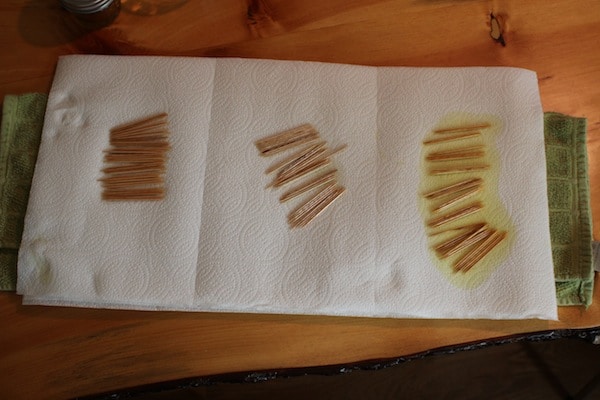 I used three layers of paper towels, and a rag underneath it all, just in case. On the right are the toothpicks from the dish – you can see it had a lot more oil, and it soaked through to the rag. On the left are the Jameson toothpicks, and in the middle are the cinnamon ones. Be sure to keep the oil, as you can use it again and again as long as it lasts (eventually it will all be soaked up by the toothpicks).

4. Find a Case and Enjoy 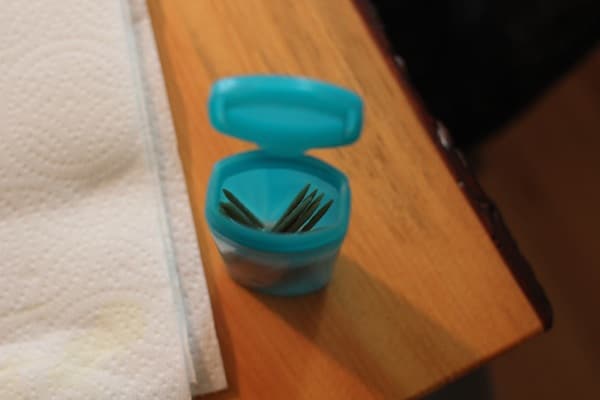 I used an old Mentos Gum case and mixed up the flavors (except for the cinnamon — that sucker burned the second it touched my lips!) so that I’d have a nice little surprise flavor every time.

A Review of the Flavored Toothpicks

So, how did they taste? The Jameson was actually the weakest flavor of the bunch. It was definitely noticeable, just subdued. For any non-concentrated liquid, I think you’ll have to let it soak for a while longer. I was closer to 24 hours than 48, so maybe that extra day would have made a difference. As I already noted, the cinnamon flavor actually burned quite a bit, almost the instant it hit my lips. Cinnamon oil is potent and fiery. I even let them dry longer to get more of the oil off, but it was no different, and I ended up discarding them. The peppermint was definitely my favorite, and the orange was good too, albeit a little more subtle. Go crazy with flavors — you can get tea tree, clove, apple, etc. The possibilities are really quite endless! 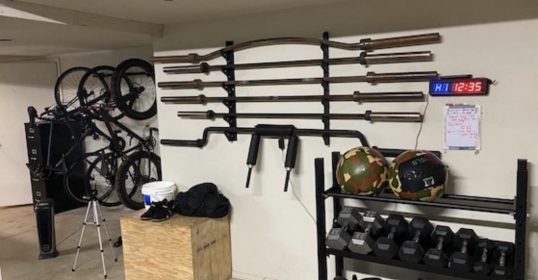