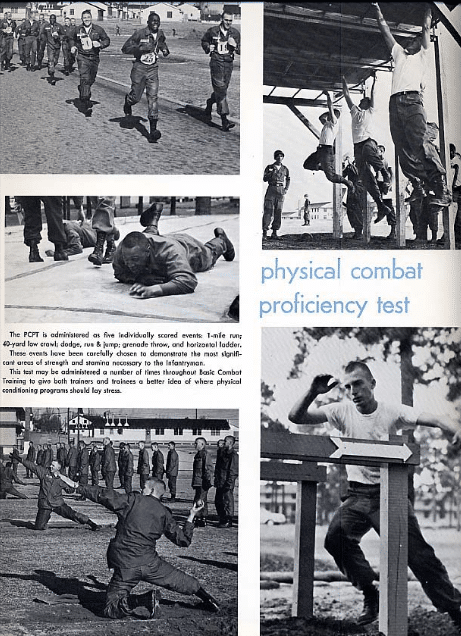 As we detailed earlier this year, the Army’s physical training test has gone through several iterations over the decades, and swung between two different areas of emphasis: combat readiness and physical fitness.

In the years during and after WWII, the Army’s robust PT test aimed to test all-around functional fitness and consisted of 5 events: pull-ups, push-ups, squat jumps, sit-ups, and a 300-yard run.

But the Korean and Vietnam wars showed the military that the test was still lacking; while it gauged physical fitness, it didn’t sufficiently correlate to the kinds of physical tasks required of soldiers in combat.

So in 1969, the Army codified a new test in FM 21-20: Physical Readiness Training. As the name of the field manual implies, the emphasis of the new test was on combat readiness; in addition to gauging soldiers’ strength, muscular endurance, and aerobic/anaerobic capacities, the Physical Combat Proficiency Test (PCPT) was also designed to assess their agility, coordination, and ability to actually perform what the Army calls “warrior tasks.” It didn’t just test physical fitness, but physical skill. The test involved 5 events: low crawl, horizontal ladder, dodge/run/jump, grenade throw (substituted with a man-carry for combat support personnel), and a 1-mile run, and participants had to complete the events in their uniform pants and boots.

In the years after the introduction of the PCPT, an emerging emphasis on aerobic fitness in the wider culture (see: jogging), a concern over rising obesity rates in new recruits, and the integration of women into the military, led the Army to create a new PT test. Introduced in 1980, the Army Physical Fitness Test required just 3 events: sit-ups, push-ups, and a 2-mile run, and could be completed in a PT uniform of shorts and sneakers. As is reflected in the name change, the APFT was designed only to assess general fitness and health, and was thought to introduce greater parity for male and female soldiers.

The APFT has come in for plenty of criticism, and the PCPT is still considered by many to be the high-water mark for the Army’s physical training tests — a true assessment of all-around functional fitness and physical skill.

If you’d like to take the Physical Combat Proficiency Test yourself (combat boots optional), below we offer a condensed version (sans the manual’s administrative details). It does require some equipment (another reason it was done away with) — 4 obstacles (simple to make, or borrow a few sawhorses) for the run, dodge, jump event and a target for the grenade throw. But it’s a fun, interesting test that will give you an idea as to whether or not you’re “combat ready.”

If you take the test, let us know how it went and how you did by sharing a photo and/or your score with @artofmanliness on Twitter or Instagram! 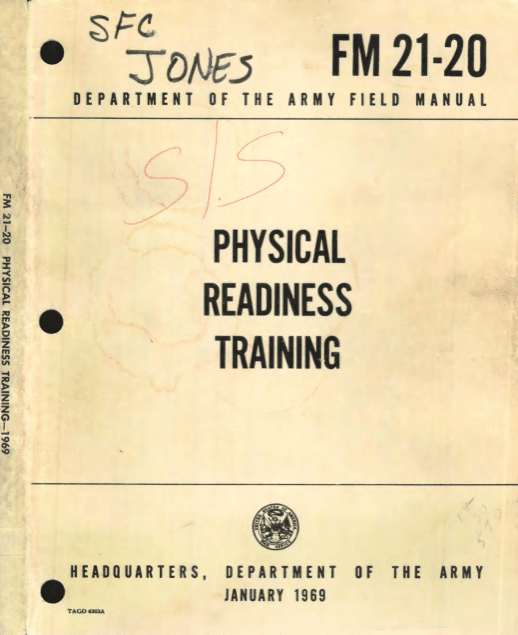 a. For all personnel to be tested other than those undergoing individual training the skills tested are crawling, traversing, throwing, dodging, jumping, and running. These skills are measured by five events including the 40-yard low crawl; horizontal ladder; dodge, run and jump; grenade throw; and 1-mile run.

b. For personnel undergoing BCT, AIT, and CST these same skills are measured with the exception of throwing. Weight carrying is substituted and the 150-yard man carry is used in place of the grenade throw. This version of the test is known as the Physical Combat Proficiency Test — Modified. 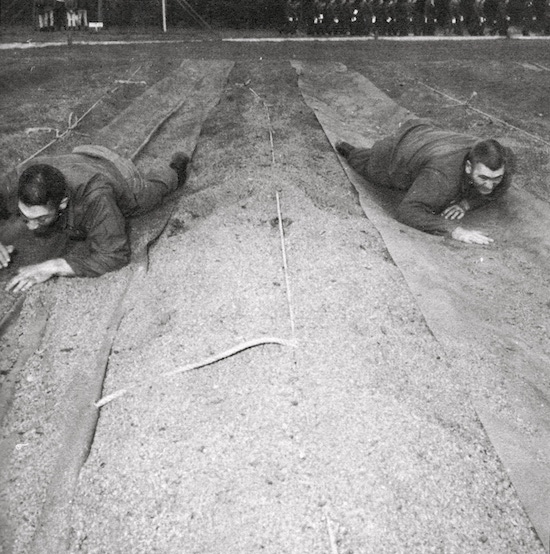 Instructions. The 40-yard low crawl tests your ability to crawl rapidly and is a measure of your endurance.

You are to assume a prone position at the starting line with your elbows and chest resting on the line. When I give you the starting signal “GO,” you are to crawl the length of the course, and when you are near enough to the end line of your lane, reach out and touch it with your hands; and immediately turn around by spinning on your stomach and crawl back to the starting line. Time is measured from the word “GO” until your hand touches the finish line. You must crawl low, keeping some part of your trunk on the ground at all times. This means either your hips, your stomach, or your chest on the ground. You are allowed to choose your own method of crawling, as long as the form used permits ground contact with at least one part of the trunk throughout the crawl and a low silhouette is maintained.

You can be stopped for breaking ground contact, for failure to maintain a low silhouette, and for diving or lunging at the start, on the turnaround, or at the finish. You will be warned by the scorer if you commit a violation. After the third warning you will be halted and required to rerun the course. Should you again be warned three times, you will be disqualified from the event and receive no score. 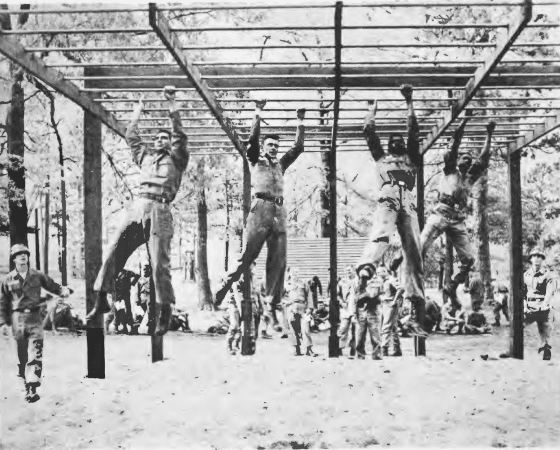 Upon my signal step up unto the supports and grasp the first rung with both hands using the forward grip. On the command “GO” swing your feet off the support and at the same time begin forward progress grasping the next rung and propelling your body forward, you must alternate your hands grasping each rung of the ladder. When you reach the end of the ladder, turn around and come back. Continue to traverse the ladder until you hear the command “STOP” at the end of a one-minute period. The lapse of time will be announced at 15-second intervals. You will be scored on the distance traversed or “walked” on the ladder during the one-minute period. If you tire and desire to stop before the expiration of the one-minute period, you may do so. In order to receive credit for the last rung, you must actually have your body weight suspended from it, rather than merely touching the rung. If you accidentally lose your grip and fall off during the first trip down the ladder, to include the act of turning around, you will be stopped and permitted to go to the end of the line to attempt the event a second time. On the second attempt the rung count starts at zero. If you fall off a second time, at any place on the ladder, no further attempts are permitted and you are scored with the number of rungs from your second attempt. 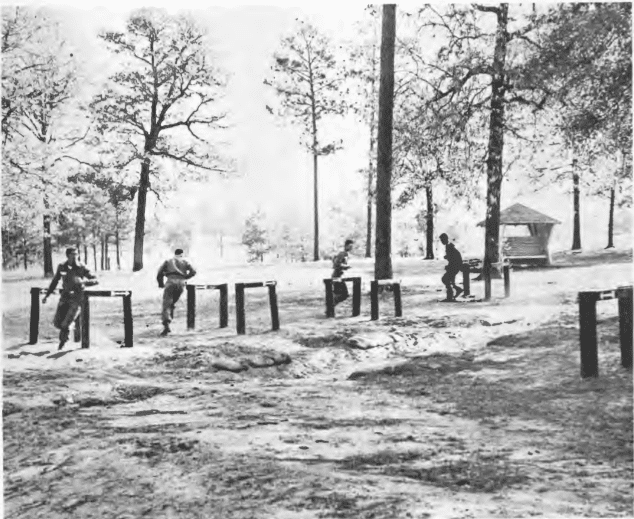 Instructions. The dodge, run, and jump tests your ability to rapidly change directions while running and to jump a six-foot-wide ditch.

If you intentionally touch any of the obstacles, fail to clear a ditch, or run out of the pattern, you will be stopped and required to rerun the course. Should you again commit one of these offenses you will be disqualified and receive no score. Time ends when you cross the finish line on your last trip. 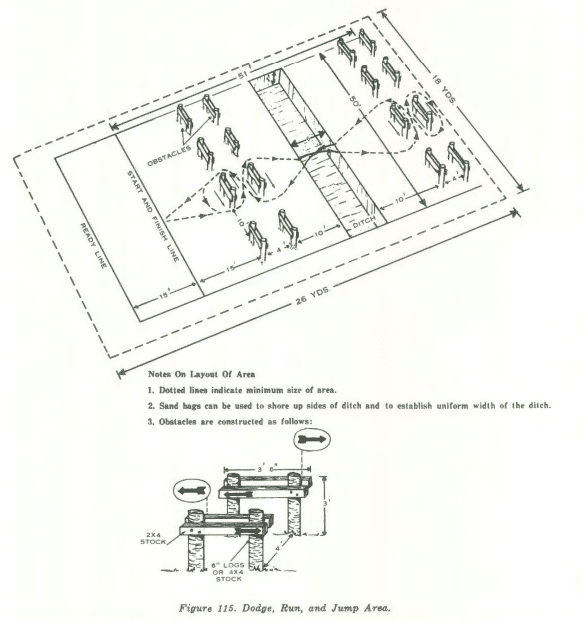 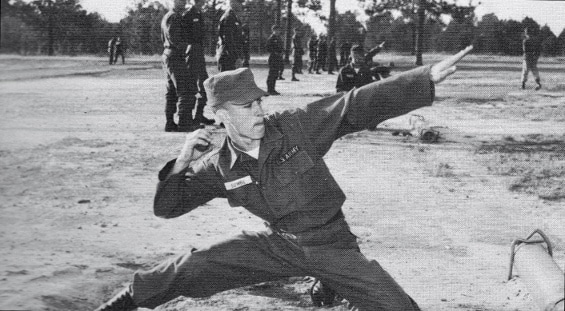 Instructions. The grenade throw tests your ability to throw both for distance and accuracy.

You are to throw seven grenades at the target which is 90 feet from the throwing line. The first two grenades are for practice and will not count on your score. The remaining five grenades will be scored. At my signal you are to throw one grenade at a time, attempting to have each grenade hit the center of the inner circle. You must throw from the kneeling position. In throwing, you may use any overarm motion desired. When it is your turn to throw, assume the kneeling position and watch me. I will be stationed in rear of the target area with this flag. Watch the flag signal; when the flag goes up, secure a grenade; when I drop the flag, make your throw. In throwing, take time to aim. Each of your grenades will be scored as follows:

A grenade hitting on any line will score the next higher value. 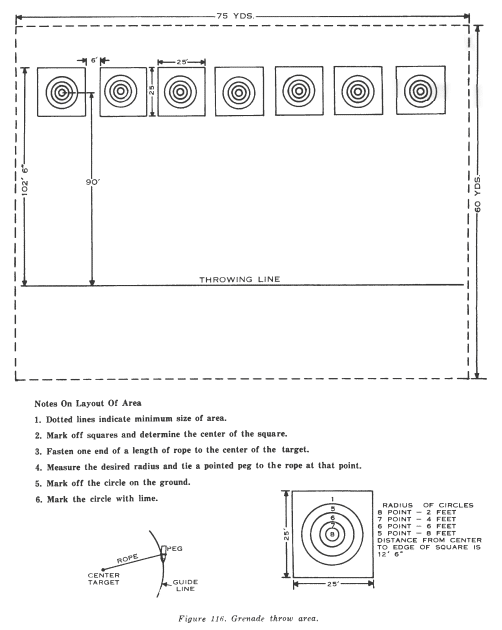 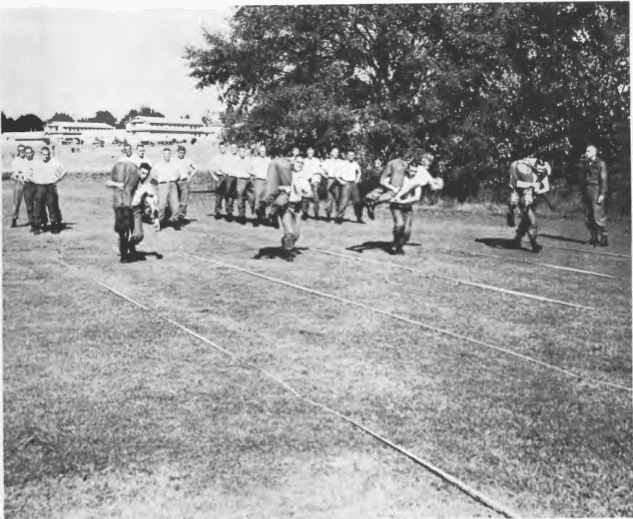 This event is used in place of the grenade throw for BCT, AIT, and combat support training in USATC’s.

Instructions. You are now paired with a man of approximately your own weight. Do not change ranks or partners. The starting commands are: mount, get set, and go. On the command to mount, you are to lift your partner using the carry position of your choice. When ready, you may place your lead foot on the starting line. At the command “GO” move to the finish line at the far end of the course as fast as possible. If you fall, drop your partner, or he becomes unbalanced, you may pick him up or rebalance your load and continue the event. If this action is necessary, move rapidly as you are being timed. When you finish the event, lower your partner to the ground and both move behind the ready line and reassemble in rank order. The odd number ranks will carry their partners down the course, and after all the odd numbered men have completed the event, then even numbered men will carry their partners back up the course. 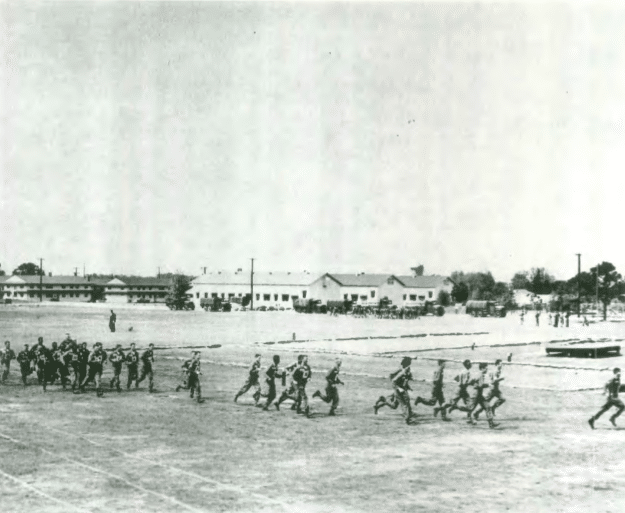 Instructions. The one-mile run tests your endurance and your ability to make a prolonged run.

You will run in a group of 36 men. Another group of 36 men will start at the same time on the opposite side of the track. At the start, all runners will be to the rear of the starting line. At the command “GO” each man will start running around the one-quarter-mile track; each man setting his own pace and running to the right of the stakes marking the track. Four laps around the track equal one mile. You will start at this line, and after running four laps around the track, you will finish at this same line. As you complete each lap, an official will announce the number of laps remaining to be run. Try to pace yourself and do not run all-out on the first lap. You will be scored on your ability to run the mile in the shortest possible time.

In the use of Part I of the scorecard, to convert raw scores to point scores, go down the proper event column until the actual performance in time or rungs is reached. The point value to be awarded is opposite in the first column at the extreme left of the card. 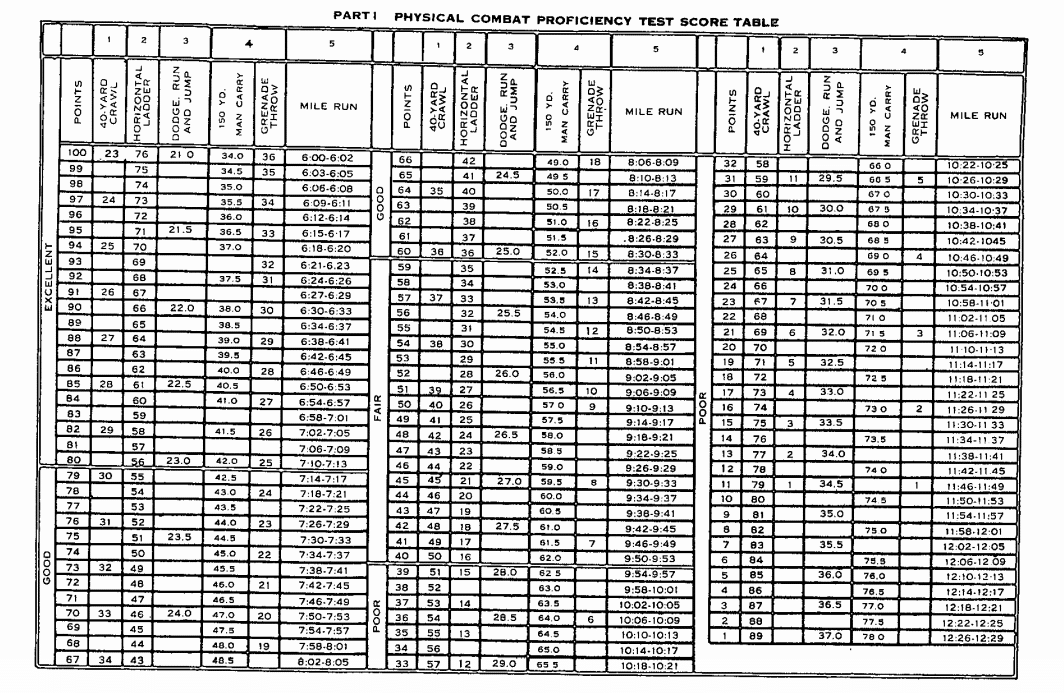 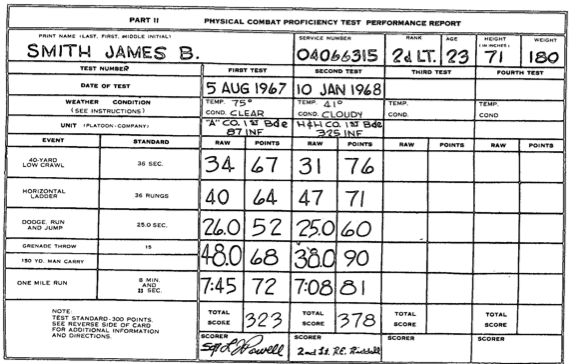 The minimum total point standard for all users of the PCPT is 300 points. Personnel in the following categories are required to attain 300 points and the additional minimum event point scores as follows: 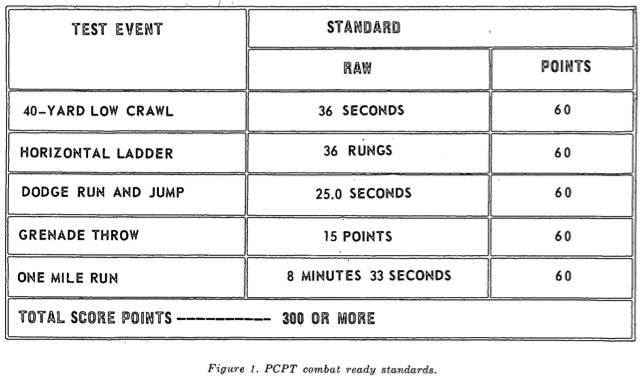 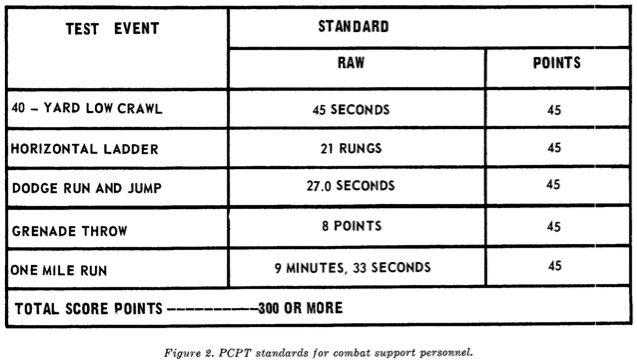 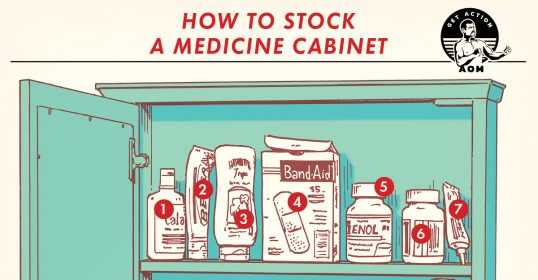 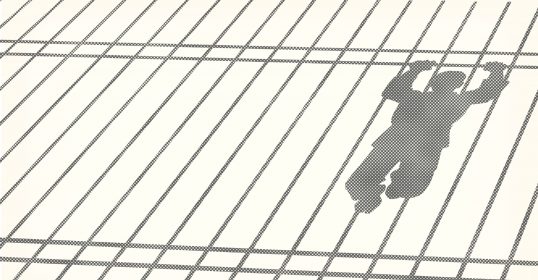