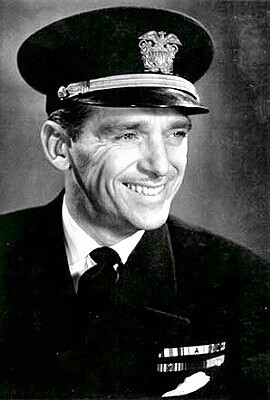 Awhile back, we published an article on how to write a sympathy note. Penning this type of correspondence is a difficult task. While I think we offered a good guide, it’s one of those things that’s easiest to understand when you see a real example. So I when I came across the following letter in the book War Letters, I knew I had to pass it along. It’s truly an example of a pitch perfect sympathy note.

The letter was written by Douglas Fairbanks Jr. Many know him as an actor, but he was also a highly decorated Naval officer. His awards span the globe: the United States Navy’s Legion of Merit with bronze V (for valor), the Italian War Cross for Military Valor, the French Légion d’honneur and the Croix de guerre, and the British Distinguished Service Cross.

When his dear friend, John Kremer, was killed when a kamikaze plane crashed into the USS Orestes during WWII, Fairbanks wrote the following note to Kremer’s mother.

Word has just reached me about John.
No words of mine will supply the comfort and the strength which these days require. However, I could not let the day pass without letting you know how very deeply I am feeling the effects of this crushing news.
To say that I was fond of John would merely be the echo of any and all who ever knew him. He was a man whose courage I admired, whose wisdom I respected and whose friendship I treasured. No one will miss him as much as you, but know that I, for one, will remember him with affection and count myself fortunate for having known him,-for as long as I linger with “this mortal coil.”
Dick Barthelmess wrote me the news and said, in part, “I hope he is sitting on a nice comfortable cloud, conversing in Greek, with a quartet of harps playing soft chamber music to him. He’d like that.” I feel sure that’s right.
This sort of letter should be brief but I’ve gone on because I did want to say my say about a fine man, a courageous warrior and a great friend.
My wife joins me, dear Mrs. Kremer, in sending you and the children our most very sincere sympathy & friendship and the hope that the great sorrow you have will somehow be mitigated by the pride you must also feel.