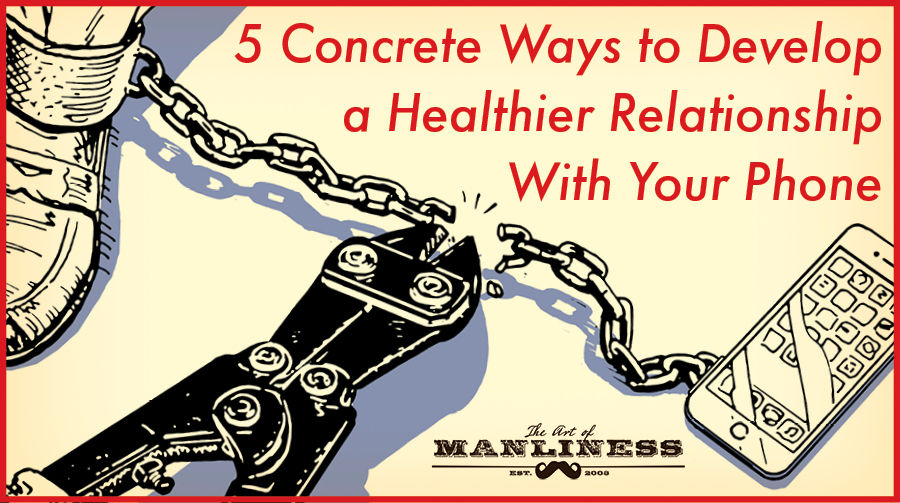 For many of us, our smartphones have come to feel like another appendage. We carry them wherever we go, fondle them during meals and conversations, and sleep with them next to our pillows. Wherever one is, so is the other.

However, unlike our typically unabashed appreciation for our physical limbs (arms and legs ftw!), our feelings about our smartphones tend to be quite a bit more mixed, if not downright negative. We bemoan the ever-present desire to check and toggle their screens and the way they fragment our thoughts, prevent us from doing any deep work, and make it difficult to focus on the friends and loved ones around us. This is likely especially true for those who are old enough to remember a time in which you went about your daily activities — to class, work, the gym, dinner — without this constant companion in tow; who are old enough to remember a state that didn’t feel deficient but wonderfully unencumbered and simple. A time when boredom had to be faced nakedly, with only the inner resources of the mind, and a friend’s face was the most engaging thing in the room. A time before the itch.

There are things you can do to loosen your attachment to this technological appendage, which include deleting or blocking certain apps on your phone, and which we detail here. I can say from experience that these methods are extremely effective in reducing your phone’s attraction and thus how often you check it.

But installing apps to block other apps can seem a bit like a hair-of-the-dog kind of cure, and relying on external blockers doesn’t fundamentally change your relationship with your phone.

To modify that relationship, it’s helpful to develop some concrete habits — a set of more embodied behaviors — that tangibly shift the place of your phone away from the center of your life.

Here are 5 we have field-tested and heartily recommend:

1. Don’t check your phone first thing in the morning.

It’s been said that how you start something is how you’ll finish it, and nothing could be truer when it comes to what you do immediately upon rising. If you check your phone first thing in the morning, you are absolutely, positively setting yourself up for a day of distraction.

For many people, their phone’s alarm wakes them up in the morning, and the very first thing they do when they open their eyes is to unlock its screen. You become dependent on the glow of this artificial sunrise — and the way it switches on the drip-drip-drip of dopamine release — to feel aroused and get going. But in giving your brain that hit as its very first reward of the morning, you prime it to look for more of the same throughout the day.

If you want to set yourself up for a day of focus instead of distraction, then try to keep yourself from looking at your phone for at least 15 minutes — the longer the better — after you get up. Even better if you kickstart the day with the very opposite of smartphone surfing — an activity that actually requires concentration — like prayer or meditation.

In keeping this habit, it’s obviously hugely helpful to not keep your phone by your bed, or even in your room, so, as we’ll mention below, don’t go to sleep with it at night. Instead, you’ll need to get yourself a regular “old school” alarm clock. There are plenty that offer noises beyond the annoying beep-beep-beep you may associate with these devices, even some which simulate a sunrise, silently waking you with a bright glow of light, but without an attendant urge to immediately check Instagram.

This habit makes a huge difference in how your day goes, so if you implement nothing else from this article, DON’T CHECK YOUR PHONE FIRST THING IN THE MORNING!

2. Don’t take your phone in the car/on errands.

Here’s what happens when you take your phone with you on the go: you check it at red lights in the car; you check it while standing in line at the grocery store; you may even check it while you’re driving, even though you know this is horrendously dangerous.

Even if you leave the phone in the car while you do some activity, like, say, going for a run, you’ll check it right before you start and right after you return — bookending that mind-clearing experience, whose effects could have started sooner and lingered longer, with a dive into noise and distraction.

So just leave your phone at home when you’re out and about (or if you’re driving to work where you’ll need your phone, put it in your briefcase in the backseat or in your glove compartment). I know this may sound extreme — don’t people need to be able to get ahold of you? But as someone who came of age pre-cellphones, people used to be completely, utterly fine without being reachable 24/7. When’s the last time you really, truly got a message while you were doing an errand or working out that had to really, truly be answered right then and there? Unless you’re in some kind of high-pressure job, it happens very, very infrequently. Instead, you typically check your messages and emails while out . . . and then wait until later to answer them! If you’re honest with yourself, the need you feel to take your phone everywhere isn’t about staying in touch with others, but the itch to remain in contact with the stimuli they send you.

Of course, I realize that people use their phones to play music/podcasts in the car and while working out, so this isn’t a hard-and-fast rule; rather, it’s an encouragement to treat as many of your little trips as possible like pockets of tech detox, where you can recalibrate your itch for your device and better keep it under control. I’d mention though that you might consider using something like Sirius XM in your car as an occasional alternative to phone-generated music, and trying a quiet workout every once in a while; it’s a good opportunity to practice the spiritual discipline of silence.

3. Leave your phone in your pocket during meals/conversations.

Studies show that even the visible presence of a phone that’s turned off inhibits people’s conversations; subconsciously worried they’ll be interrupted by the device, folks stick to shallower topics. So don’t put your phone on the table during a meal, nor hold it in your hand when talking to other people, even if you don’t actively check it. Keep it tucked away in your pocket or a bag, and be completely present and focused on those around you.

4. Keep your phone hidden away when you’re working/reading/watching television.

In a study done on diets and food intake, researchers found that participants ate more candy when it was placed in a clear jar on their desks, but less when candy was stored in a opaque jar, and even less still when the opaque jar was placed six feet away from them. The result makes simple intuitive sense: the more directly something is in your line of sight, and the more easily accessible it is, the more you’ll think about it, and the more you think about it, the greater the temptation becomes, and the greater the temptation becomes, the greater the chance you’ll eventually give in to it (it’s hard to say no over and over again).

As with candy, so with smartphones. Even if your phone is turned off, if it’s sitting in sight on your desk, your brain will be thinking about its desire to check it. Even if you’re not conscious of this desire, it will still be niggling in your mind, continuously colliding with your impulse control, and back and forth the two forces will fight. Eventually your willpower will be worn down, and you’ll give up; even if you do manage to hold out for a while, the battle raging between check/don’t-check will invisibly suck up your mental bandwidth and weaken your focus.

To eliminate the Pavlovian prompts that will induce you to check your phone, keep it completely hidden when you’re working, reading, or watching television — when it’s out of sight, it’s out of mind. If all you can do at the moment is hide your phone behind your laptop, even that helps. But the farther away it is, the better: if you can put it across the room or on the other side of the house, do it; your mind kind of files it away as “unavailable,” doesn’t want to bother with the energy required to retrieve it, and stops thinking much about it so you can concentrate on other things. I find that when I put my phone in a different part of the house, it even helps to go a step further and put it inside a drawer; that may sound silly, but it seems to prompt the brain to deep-six the idea of checking it even more.

5. Don’t keep your phone by your bed.

71% of Americans (that number rises to 90% among 18-29-year-olds) sleep with their phones in or near their beds. You’ve probably heard how bad this habit is for your sleep, what with the emittance of all that blue light and the potential urge to check a notification that arrives in the middle of the night. But it’s also terrible for fostering a dependent relationship with your phone; it is strange to ponder that a glowing screen is the last thing millions of people see before they close their eyes at night. That which we bring into our bedrooms and beds are the things most intimate to us — do you want your phone to be one of those things? To cuddle up to those cold circuits as a security blanket?

Instead of training your brain to think of your phone as an appendage that even nestles down between your sheets, let your relationship with it end at the threshold of your bedroom door; leave it to charge in the kitchen or living room, and instead take a good paperbound book into bed with you to close out the day.

Then, when you wake up in the morning, your phone won’t be there when you roll over, and you can begin the day without it, naked, but not afraid.

Listen to our podcast with Cal Newport about digital minimalism: