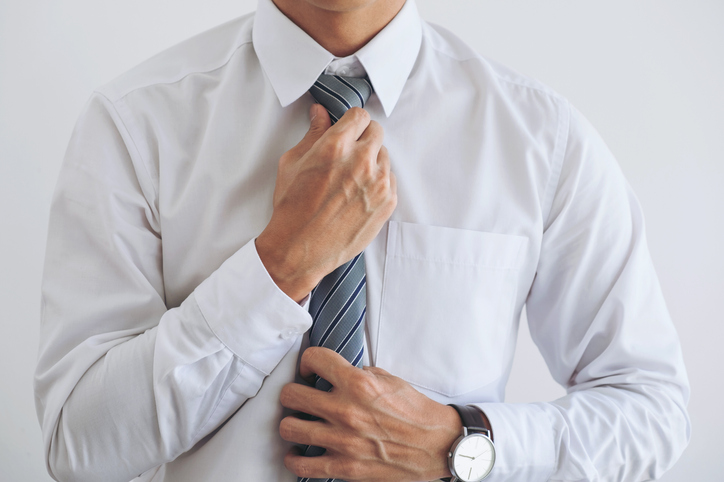 Editor’s Note: This is a guest post from Mark Richardson.

Just over a year ago, I started an engineering job at a local company where typical daily dress is a collared shirt and slacks. While scouting for something to wear on a random day in the first few weeks, I noticed a large number of ties in my closet. My wife and I had recently moved and made an ardent effort in packing and unpacking these clothing articles, so I decided to make these efforts worthwhile by knotting one on my neck for the day and determining to wear one the rest of the week. Around the office that week, I received the typical, sarcasm-laced questions of “When’s the interview?” and “Why are you dressed like that?” numerous times.

The next week, I was running late on Monday and decided to skip the tie in favor of regaining a few much-needed minutes. A peculiar situation occurred later in the day when the president of the company, whom I rarely interacted with, poked his head into my humble cube and asked where my tie was. I was floored and unable to answer, but his question made me ponder my wardrobe decisions. I had worn a tie for a single week and, as a result, the head of the company was keenly aware of my presence and appearance.

Consequently, I decided to run an amateur social experiment to see if one tiny strip of colored fabric could truly make a difference in my professional life. My experiment was simply to wear a tie to work every day for a year while occasionally donning a sport coat or blazer for good measure. As a non-senior engineer, I knew I was unable to change my years of experience immediately; however, I did have the ability to quickly change my appearance for the better.

The Results: The Benefits of Wearing a Tie Every Day

Before diving into this list, I would like to add that this was my personal experience with wearing a tie every day; I, of course, can’t guarantee this will happen to every reader. In addition, tie-wearing must accompany good work. A well-dressed sloth will never exceed the value of a shabbily-dressed industrious worker. That said, here are the benefits I recognized over the course of the year:

A tie is a relatively small piece of clothing. And yet, the presence of one around your neck immediately separates you from the sea of unbuttoned collars. Even if your name is relatively unknown around the office or in departments you rarely frequent, others will notice and identify you by your clothing choice. Of course, recognition can be a double-edged sword. Some coworkers, especially aspiring managers, could see your upscaled dress as a threat — as a sign of your ambitions. Be aware of this, but take courage in knowing that as long as you don’t act in a pompous manner, these feelings will soon pass. In fact, instead of provoking antagonism, you may inspire your coworkers to dust off their own sport coats and ties to wear into work.

The first day I came out of our bedroom sporting a tie, my wife did a double-take and said, “Wow you look nice!” Naturally, that made me feel marvelous and I held my head high the rest of the day. At work I received some comments as well, some sarcastic and some genuine, but the former gradually went away as I continued to wear the tie, and overall, I found that wearing a tie every day made me feel a greater sense of self-respect.

I soon realized that it wasn’t only the affirmations of others which constituted a change in my self-esteem. The self-discipline of willingly going the extra mile in my wardrobe choices and knowing I stood out among my peers and coworkers was enough to make me stand taller and walk straighter. In my experiment I felt a draw of prestige harkening back to the power suits of the 50s and 60s. While I offer no scientific proof, I can assure the reader that a man who feels he looks exceptional will exude confidence and dignity. On the flipside, a major drainer of confidence is having to acknowledge yourself as the most underdressed person in the room. With a tie, you’ll rarely be put in that situation and you can proudly and comfortably attend any client or internal meeting — even when it’s last minute.

While this article is directed at ties, I would like to put in a plug for the sport coat too. A well-fitting, waist-slimming, shoulder-broadening coat will enhance your appearance and make you stand out among other men around you (even ones who have a better physique but aren’t dressed as well).

Not only can a tie, especially paired with a suit or sport coat, help you feel more confident yourself, it will also lead to others placing more confidence in you. This confidence can materialize in different forms, but it will commonly emerge in being given new responsibilities that lie outside your typical role or position. Perform these new obligations well, and the greater confidence lent you, born from wearing a simple tie, can quickly and easily set you far ahead of your peers.

Throughout my experiment I noticed I was picked among my peers to attend important client meetings and take on new projects. When I finally asked a supervisor why I was being chosen, he simply answered, “We know you will always be dressed appropriately to be in front of a client.”

Yearly performance reviews and raises came about midway through my experiment. A meeting with the office leader disclosed that I was getting the maximum raise percentage, which was only awarded to three people that year. This outmatched all my peers and some direct managers who outrank me. The office leader cited my “professionalism” as one of the main reasons for bestowing this sizable raise.

During the experiment, my company was going through some growing pains from their recent buyout. In my department, this meant an exodus of coworkers leaving for other firms coupled with large layoffs. As my experiment came to a close, I looked around and realized everyone with my title had either left the company or been laid off. I took this observation to the president of the company, wondering why I was left standing, and received the response of, “You’re the last person we would think of laying off.” As before, my “professionalism” was stated as a major reason for keeping me with the company.

How to Wear a Tie Effectively

If you’re intrigued by my experiment, and considering wearing a tie more regularly yourself, here are some tips on how to do so with style, dash, and modesty.

Wearing the right tie in the right way is almost as important as wearing a tie in the first place. Neglecting to acknowledge the style considerations surrounding this accessory can result in an appearance that is immature, awkward, or slovenly. So read up on the following resources on how to wear a tie well:

My father once told me, “It’s very easy to tell if a man is at home in a suit.” This observation can be confirmed at weddings, funerals, proms, and Easter Sunday church service. Shifting uncomfortably, walking awkwardly, tugging on various choke points, and/or evincing a general air of discontent evidences that someone does not feel at home in a suit. You don’t want that same air of disconfidence when wearing a tie. Inspect your shirts to ensure that none of the collars are too tight when buttoned up; if they feel like a vice grip on your neck, collar extenders are particularly helpful and will be covered up by your tie.

If you want to kill any of the benefits detailed above, be sure to act pompous about your new wardrobe change. The goal of wearing a tie is not to feel superior to others, but rather to boost your personal professionalism and confidence. No one admires a boastful jerk. Instead, you should carry yourself with both self-assurance, and humility. When you receive questions about your tie, especially during the first few weeks, use the essence of the responses below:

Don’t use answers such as these:

Upon entering the workforce a few years ago, the first comments I heard about dress code in an office were, “Anything above a dress shirt and slacks is not really part of office culture anymore,” and “If you go in an (insert industry here) office you won’t find anyone that wears a tie or coat anymore so you shouldn’t either.” The truth is there’s a bottom threshold in office dress but there is not really an upper threshold (outside of formal wear). T-shirts and shorts are frowned upon in the workplace but rarely is a tie and sport coat. Do not be afraid to challenge the culture of your workplace by wearing a tie. You will create a new culture and people will either rise to meet it or you will stand out proudly.

I hope that reading this article will inspire you to wear a tie and maybe a jacket to work. Ties are a seemingly small piece of fabric in a man’s wardrobe but they can carry immense importance in a modern setting. A strip of silk hanging from the neck will naturally set the wearer apart from those around him. Handled astutely, this separation can lead to some surprising benefits.

Mark Richardson is a graduate of Texas A&M University, a civil engineer by trade, and a history lover in heart. His passion for presenting his personal best through proper attire was nurtured in the southern tradition in which he was raised. Mark and his wife, Victoria, reside in Katy, Texas.