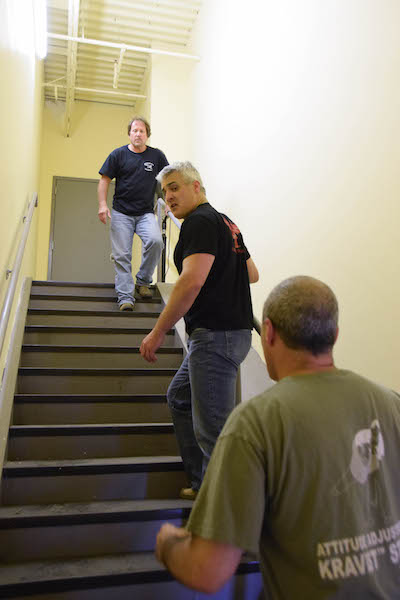 The origins of krav maga can be traced to pre-World War II Bratislava (a city in what was then Czechoslovakia and is now Slovakia), and a young Jewish athlete named Imi Lichtenfeld. Imi was a nationally and internationally renowned boxer, wrestler, and gymnast. Beginning in the mid-1930s, fascist and anti-Semitic groups rose to power in Czechoslovakia and began inflicting violence on Jewish communities. Feeling duty-bound to protect his neighbors, Lichtenfeld organized a group of young men to patrol his community and defend against would-be attackers. He quickly learned, however, that his training in sport martial arts was no match for the anti-Semitic thugs he encountered.

In developing his more efficiently practical and brutally effective self-defense and fighting system, Imi took into account his own experiences of often being outnumbered by multiple assailants on the streets of Bratislava. Therefore, contending against multiple attackers became a lynchpin of his krav maga thinking.

Defending against multiple opponents, to be sure, is a desperate and unpredictable situation and one that many people cannot win. The odds are stacked against you, especially when weapons are introduced. There are two types of groups that one can confront, including a preplanned attack group and a spontaneous attack group.  The preplanned attack group intends to attack you regardless of what you might say to deconflict. The spontaneous attack group may be on the fence and you may be able to talk your way out of it or gain a greater advantage to initiate a preemptive counterattack.

If you cannot deescalate the situation or immediately escape, there are two cardinal rules you must try to follow: 1) do not place yourself between two or more assailants, and 2) do not end up on the ground.

Unfortunately, avoiding #1 is impossible in a situation in which you find yourself defending against two assailants in a staircase, one above you and one below you.

As shown in the following series of photos, strategy in this stairway scenario dictates that you first engage the closest opponent (similar to most multiple assailant scenarios). Then contend with the other opponent. Let’s take a look at how this might play out: 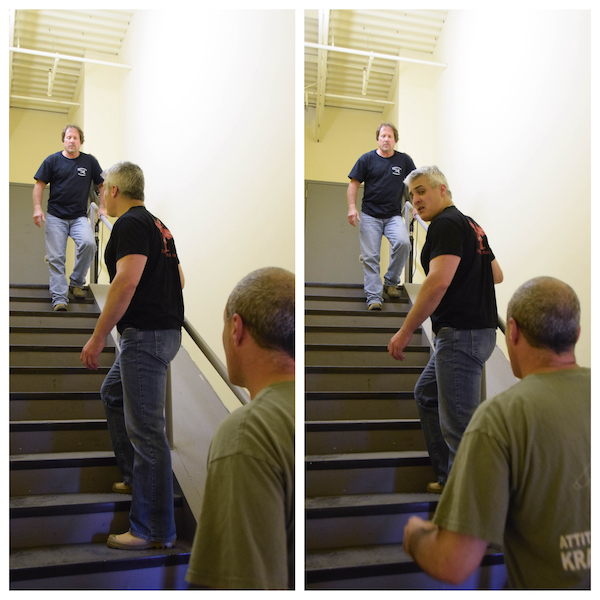 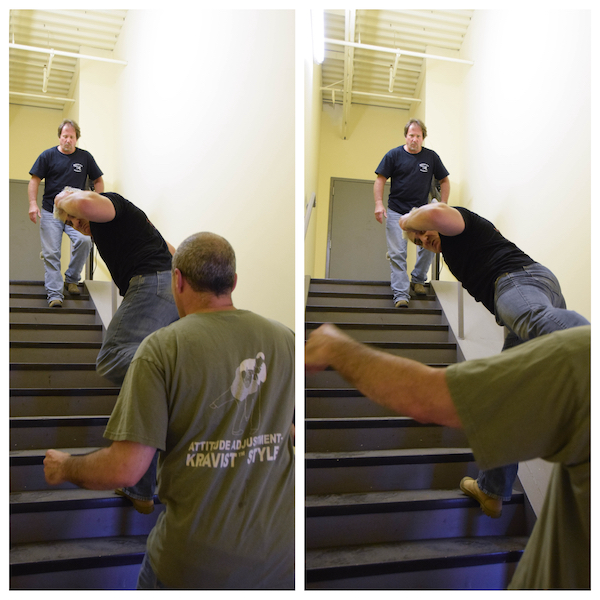 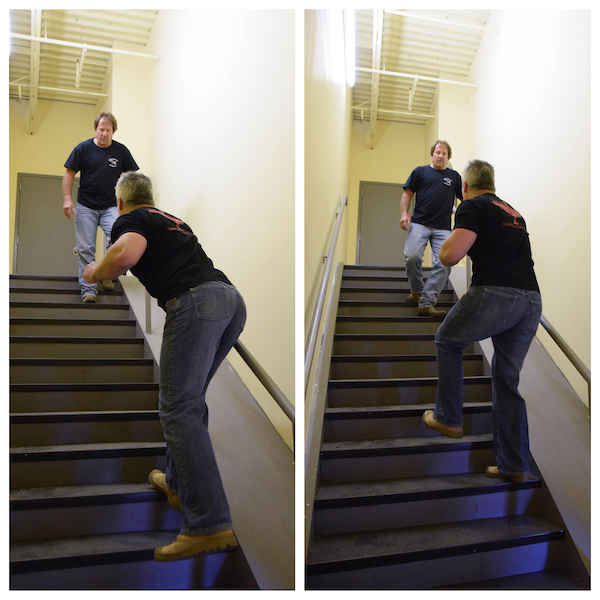 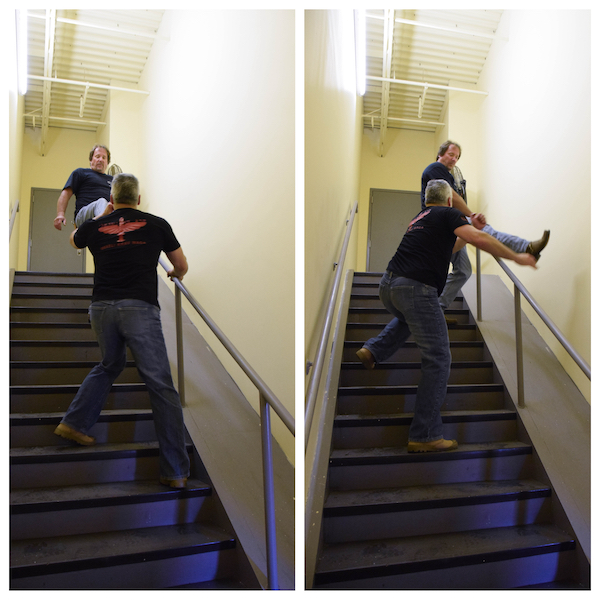 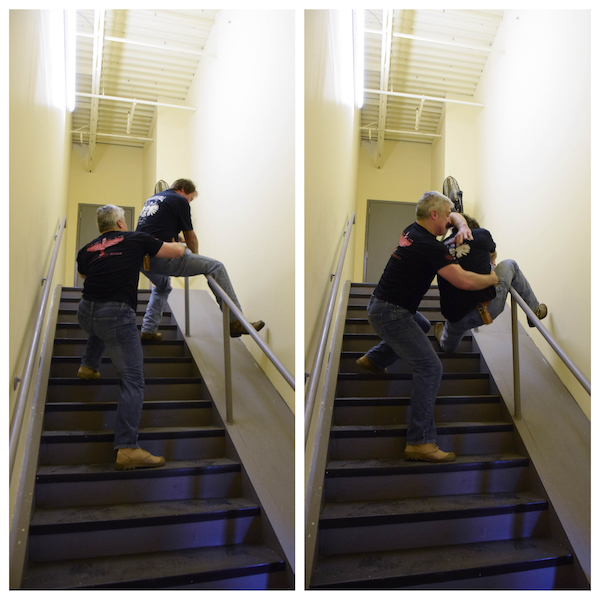 In this example, the opponent at the bottom of the staircase is more proximate, and must be dealt with first. A modified defensive sidekick (holding onto the stairway railing for stability) is a powerful option to send him sprawling down the stairs.

When you engage one adversary, you must instantly also account for the other adversary. An adversary who is higher than you may use a kick to attack (an adversary lower on the stairs would likely use some type of upperbody combatives against you, including grabs and strikes). So, in this example, after engaging the lower, more proximate threat, the defender quickly ascends the stairs to defend against a straight kick using an L parry. This L parry upperbody deflection moves the defender to the attacker’s deadside, allowing for additional combatives, including sending the attacker plummeting down the stairs as well.

In any self-defense situation, you should use optimum combatives to debilitate an opponent, and this is especially true when you are defending against multiple assailants. Whether your preferred combative is a most practical long-range kick, eye rake, punch, etc., every combative must count. You must maximize your power and reach to debilitate an opponent both viciously and effectively in preparation for the next opponent’s violent onslaught.

David Kahn serves as the Israeli Krav Maga Association’s U.S. Chief Instructor, teaches federal, state, and local law enforcement agencies along with all branches of the U.S. military, and is the author of Krav Maga: Fundamental Strategies, from which this article was adapted.

Kahn would like to thank three of his top students and instructors, Jeff Gorman and Martin “Het” Hetman, for their help in this photo series, along with Paul Karleen.