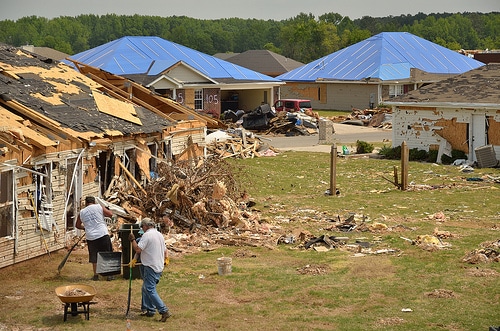 Editor’s note: This is a guest post from Jeff More.

How many of us have watched the footage of recent disasters unfolding, wishing we could drop everything, pack our bags, and head down to Joplin/Haiti/Japan/Turkey to spend some time helping out with the recovery efforts?

Then reality sets in. You don’t know how to get there, where you would stay, and what you would do once you arrived. So you stay home, days pass, and that gnawing feeling of wanting to do something subsides. Besides, what could you have done anyway?

But it’s really not so outlandish an idea. If you’re tired of rationalizing away the desire to pitch in somehow, the good news is that it is very possible for us regular guys to get involved in disaster relief efforts. It simply requires some advance planning.

The key thing to sort out is finding an organization to work with that would be a good fit for you. In my opinion, this is the toughest part, much more so than finding the time and money to go.

Where to look? If you are involved in some charitable or religious organization, I would start by asking around there. Chances are you know someone who knows someone. In my case, I have been a reservist for Hope Force International for four years and found out about them when my former roommate’s church was hosting a training session. Ask your friends who have served as missionaries or non-profit workers in developing countries, as these folks sometimes cross paths with relief organizations.

If you are not the religious type, fear not, as there are secular organizations involved in disaster response, oftentimes made up of professionals in certain fields, such as Doctors Without Borders, for example. Another is Team Rubicon, formed when its founder, Jake Wood, a USMC combat veteran, posted on his Facebook wall after the 2010 Haiti quake that he was assembling a team to head down there. If you are a veteran, I strongly encourage you to contact them. And if you find a faith-based organization that piques your interest, give them a call as some do not require you to be an adherent of their beliefs to be a member.

Disaster relief organizations are flooded with calls when the footage is piped into your television, but simply calling them up in the heat of the moment doesn’t mean you’ll get sent just like that. Before you go, many require you to go through a training session or at least several meetings to get everyone on the same sheet of music, as it were. Do your homework now during peacetime and get your ducks in a row.

Relevant Skills in a Disaster Zone

Sometimes there are only so many slots available immediately post-disaster until a logistical foothold of sorts can be established and the non-profits can bring in the just-as-motivated but lesser-skilled volunteers. Immediately following a natural disaster, hotels will be packed with newly-homeless residents and mission critical government personnel. To put it bluntly, you should be able to offer something to justify your consumption of limited resources.

Think ahead about the skills you wish you could have, or as Steve Kamb of Nerd Fitness put it in his fantastic article, How to Level Up in the Game of Life: Determine your Level 50, and take intermediate steps to build those skills.

For example, medical professionals such as nurses are often towards the top of the list to deploy if there are limited seats, so earlier this year I signed up for a Wilderness First Aid (WFA) course through the National Outdoor Leadership School to level up my healer skill tree. I would like to become Wilderness First Responder (WFR) certified eventually, but WFA is a respectable intermediate step.

If you have not spent a night away from the comfort of a soft, warm bed and have little/no outdoor skills to speak of, take up backpacking. It is a great way to learn self-reliance in a relaxed and recreational setting. Start building a bug-out-bag. If you can’t take care of yourself, how are you going to help someone else? Put your oxygen mask on first before assisting others.

All this said, don’t write yourself off if you don’t have any sweet skills. My intention is not to tread into “everyone gets a trophy for playing” territory, but you might have a card up your sleeve that will come in handy since unexpected needs have a tendency to arise in disaster areas. For example, your experience working in a clothing store at the mall will be very handy in sorting the flood of incoming clothing donations.

Awesome man-skills are great to have, but I would venture to say it is more important to be empathetic. If you are going to lecture someone that they are fools for living in a flood/wildfire/earthquake/tsunami-prone area in the first place, disaster response work probably isn’t for you. Don’t strut around thinking that that locals owe you anything because you came all the way to help them. They are grateful, but they might have too much on their plate at the moment to communicate it.

Be flexible and fluid, and don’t take things personally if someone snaps at you or says something that rubs you the wrong way while they’re under stress. It sounds like a small thing, and you may think you’d be above such pettiness, but trust me, it is different once you are in the field.

Even if you suck at the first skills that come to mind for this kind of work, such as construction (I am terrible at it and have only really done demolition work…apparently I am better at destroying than creating) the important thing is to be willing to work hard, work well with others, be adaptable, and most importantly, show up. I would rather have a noob with a heart on my team than a badass who has not a shred of empathy. Best case scenario, they will have both The Heart and the Fist (shameless plug for my favorite book of 2010).

Working Around the Roadblocks of Time and Money

Then there are the big issues of time and money, but they are not always the barriers we make them out to be. Don’t just glance at your checking account and vacation days saved up, think you don’t have enough, and tell yourself no without giving it an honest shot first. Being resourceful will tilt things in your favor.

During Hurricane Katrina, I was a recent-ish college graduate and worked part-time which meant I only accrued vacation hours at a fraction of the rate my full-time coworkers did. Word got around of me soon going to New Orleans, and my coworkers, with no solicitation on my part, offered to donate their vacation hours to me in the event I did not have enough. People are more compassionate and generous than you might think—the important thing is to ask, but sometimes they will offer before you can!

Be honest with yourself. If you have the vacation hours but don’t want to give them up because you had your heart set on that Alaskan cruise or annual fishing trip with your buddies, no one is going to fault you for it. We are all in different places and life stages.

While you may imagine yourself jetting off to places like Haiti and Japan, much of relief work is domestic. There are many more logistical hurdles going internationally, such as the language barrier and waiting for foreign governments to give international aid workers the green light to operate. The less publicized (flooding in Vermont and Tennessee in 2011, hello?) operations still require able and willing volunteers.

So while you may not be getting any new stamps in your passport (you have one, don’t you?), domestic relief operations have the upside of being considerably more flexible; my two climbing buddies and I made our third trip to New Orleans the work week of a three day weekend. That’s just four vacation days spent for nine days in New Orleans.

If money is a problem, try raising support. Social media is handy for getting the word out. With growing skepticism and distrust of large organizations, folks might be willing to donate money personally towards your airfare or gas, instead of texting $10 to a big name organization where they have no visibility of what their cash is being used for.

You could start simply by sending a letter soliciting financial support, similar to what Christian missionaries do. If you’re a gifted musician, put on a living room concert and tell folks the admission will be used to fund your trip. I have had airline rewards mileage donated to my teams. Maybe you know someone who works for a hotel chain that can hook you up with a discount. A friend of mine in Tennessee offered my team his daughter’s pickup truck to use to drive to Alabama in order to save us from renting a vehicle. At the very least, you could make a savings goal in your savings account to automatically chip in a little bit at a time every time you get a paycheck.

If you’re waiting for the planets to align, chances are you’ll never get anywhere. Be creative, hustle, and put yourself out there. Folks want to be involved in good causes and are often willing to support you. Hint: people generally respond with the vibe you give out, so hopefully you are a charitable person to begin with.

What to Do Until Your Callout

Hopefully in a few months you will be all signed on as a reservist with an organization you feel confident deploying with. What to do in the meantime? Serve locally.

Some folks I know stay up with their construction skills by going on home-building trips across the Mexican border. Food banks will give you experience serving the masses in a volunteer-run kitchen—you might not see them on the news, but food service is a sizeable part of what volunteers do in disaster areas. Any way to hone your skill-sets for your next disaster relief deployment and serve the less fortunate around you at the same time is a win-win as far as I’m concerned.

If you serve or have served with an organization that conducts disaster relief, please let us know your experiences as to help others with their search. I would personally love to hear your stories as well.

Jeff More works and resides in Los Angeles, where the four seasons are mudslides, earthquakes, riots, and wildfires. He is an avid shooter of both firearms and camera, and celebrates his American heritage by playing the 5-string banjo. Check out his website at www.skunkabilly.com.