One of my favorite movies is Gangs of New York. The antagonist of the film, William “Bill the Butcher” Cutting (played by the always intense Daniel Day-Lewis) remains one of the most memorable characters of recent cinematic history. Bill the Butcher was a bad, bad dude, but the man had mad skills when it came to throwing knives, which came in handy for entertaining crowds, hewing down would-be assassins, and fighting on the mean streets of NYCs Five Points. 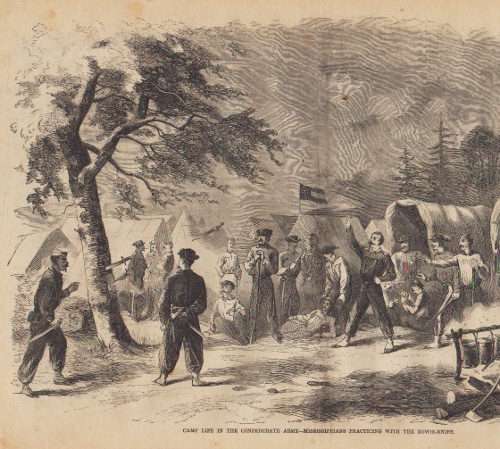 During the Civil War, Confederate soldiers threw knives in battle and for entertainment at camp.

Like the tomahawk, throwing a knife in combat has a significant downside–even when you’ve successfully stuck it in an enemy’s back, you’ve still lost your weapon. Which is why knife throwing has always been more popular as entertainment, sport, and simply as a method for whiling away time. In the 19th and early 20th centuries, the “impalement arts”–in which a thrower hurls his knives breathtakingly close to a human target in order to demonstrate his accuracy–were popular as vaudeville, circus, and sideshow acts. Today there are groups that take part in knife throwing as a sport, similar to archery competitions. 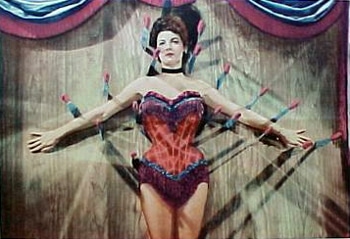 If you’re going to get into the impalement arts, you’ll need to convince a beautiful dame to be your assistant.

I always thought it would be pretty cool to throw a knife like a strange and menacing oldtime master of the impalement arts, so while I was at the Meadowlake Ranch, a working dude ranch in Sand Springs, Oklahoma, I had ranch owner Tom Warren give me a tutorial on it after he taught me how to throw a tomahawk. Knife throwing takes a little more skill and finesse than hurling a hatchet, but when you stick it, it’s even more satisfying.

There are three kinds of knives you can use for knife throwing: handle-heavy, blade-heavy, and balanced. According to Tom, most professional throwers use a balanced knife. If you’re just getting started with knife throwing, Tom suggests going with a blade or handle heavy knife. They have a much easier learning curve than a balanced knife. In this demonstration, Tom used a blade-heavy throwing knife.

How to Hold a Throwing Knife

Tom suggests an unconventional hold and release when knife throwing.  A lot of people will hold the knife so that their thumb is on the side of the knife and will release it so that the blade is vertical to the target.

Tom doesn’t like this knife hold for two reasons. First, he believes it puts your hand in an awkward position, thus preventing sufficient oomph in your throw to make the knife stick.  And second, when you hold and release the knife like this, your thumb can inadvertently cause it to wobble in the air, causing your knife to bounce off your target instead of sticking. 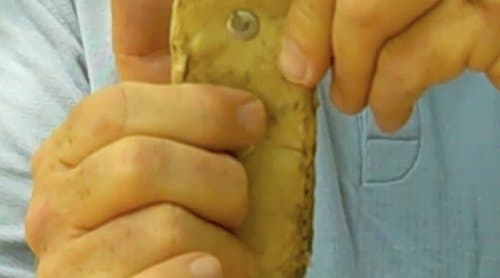 Place your index, middle, and ring fingers dead center on the handle (our knife is blade-heavy). Your little finger can just hang off the end. 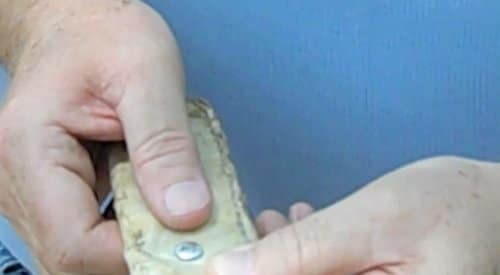 Place your thumb directly on the center of the other side of the handle.

When you release the knife, you just open your hand. No interference with the knife.

Find your throwing line. As with throwing a tomahawk, the key to successfully throwing a knife is the distance between you and the target. Measure off about five normal steps from the target and draw a line. That should give you enough distance so the knife makes a complete rotation in the air before sticking in the target.

Throwing steps. You’ll notice that your throw line is now two steps in front of you. That’s what we want. This room for two steps will allow us to get as much power as we can behind our throw. As Tom says, “You want to step to your throw line.” 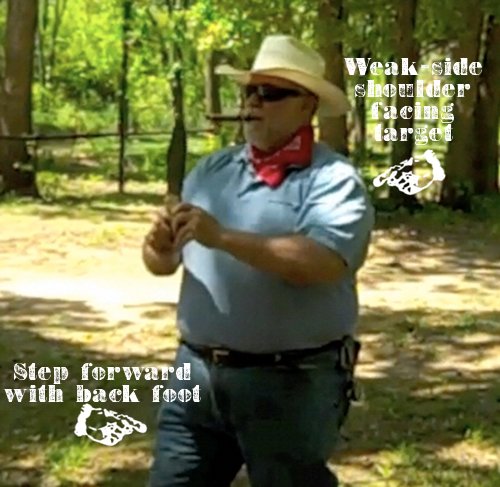 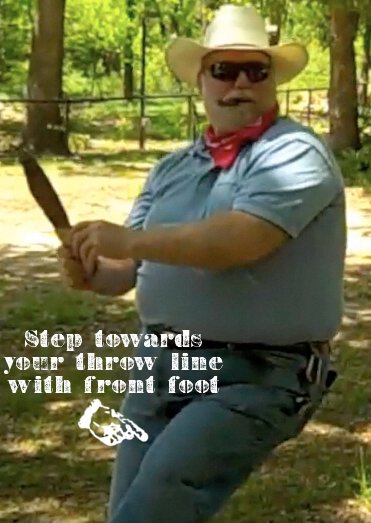 Now step towards your throw line with your front foot. Tom says it’s almost like you’re winding up for a baseball pitch. Really stretch towards that line.

Throw the knife as hard as you can. In order to successfully throw a knife, you have to throw it hard. “You gotta throw it so hard that when the knife sticks, the tree’s ancestors feel it,” says Tom.

Keep your knife horizontal to the target throughout the throw. This ensures you get proper knife rotation when you release the knife. 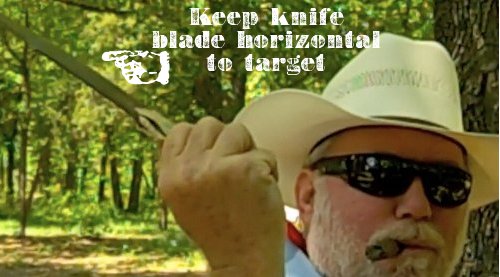 Release the knife. When your throwing arm is fully extended towards the target, simply let go of the knife. 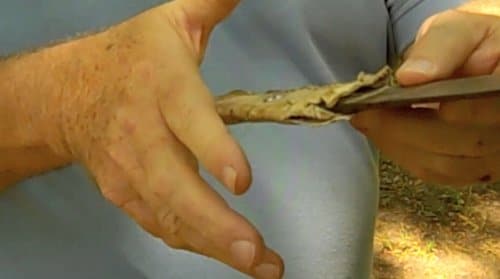 Just let go of the knife. 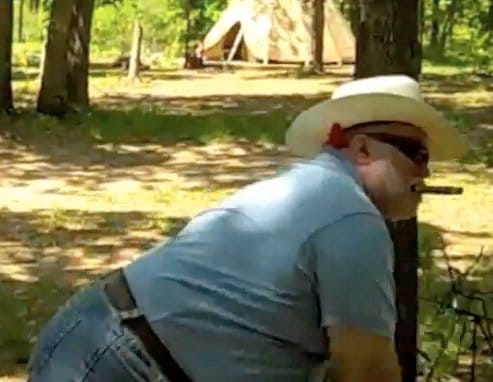 Putting It All Together in a Video

Tom doesn’t like this technique. “It’s kind of a wimpy ass throw, if you want to know the truth,” says Tom.

Spear Style. The spear or arrow style throwing technique is used primarily in combat situations. You throw the knife much like you would a spear, so that there’s little or no rotation in the air. It’s a much more difficult throw than what Tom showed us above. The advantage of the spear style throw is that you don’t have to worry how far away you are from the target or gauge how many rotations you need to have before your knife hits your target. You just throw and hope it sticks.

Special thanks to Tom for taking the time to show me how to throw both a knife and a tomahawk. If you’re ever in Oklahoma, I definitely recommend planning a weekend at Meadowlake Ranch. It’s pretty much a playground for men–tomahawk throwing, long bow shooting, horse riding, fishing, hunting. You name it, you can probably do it at Tom’s ranch.


Do you throw knives for fun? Got any other knife throwing tips? Share them with us in the comments!