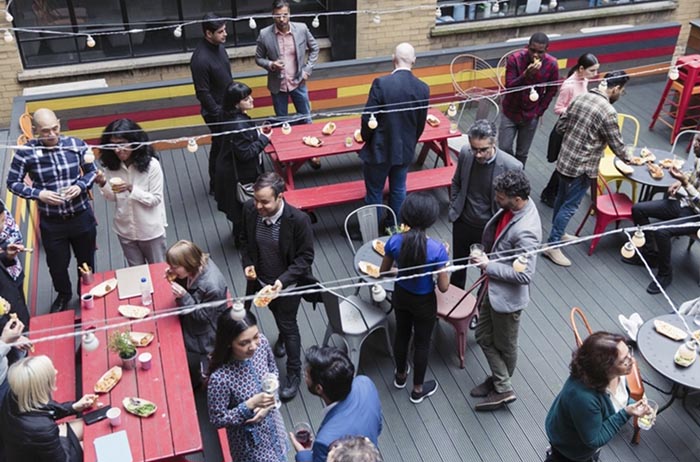 It’s often been said that the definition of insanity is doing the same things while expecting different results.

If you apply this definition to people’s social lives, there are a lot of folks out there who are certifiably nuts.

They complain that they struggle to make friends, find a special someone, and get ahead at work, but they continue to approach the interpersonal interactions that could remedy these situations, in the very same ways that have stymied their success all along.

If you’re not getting the results you want in your social life, it’s beneficial to take a step back and try to figure out where you might be going wrong.

Below is a diagnostic tool to help you with this process: listed are 6 social skill deficiencies that can be holding you back from better connecting with others, along with how to address these shortcomings, so that people start responding to you in a new, more positive way.

1. Not being able to initiate small talk.

The very epicenter of social dysfunction begins with the inability to kickstart a conversation in the first place. You’re seated at a table of strangers, or next to a classmate, or across from a cute girl on the bus, and though you want to open your mouth to say something . . . it seems positively wired shut.

Fortunately, there are several easy ways to unhinge your jaw, break the ice, and initiate small talk:

Don’t work yourself into paralysis by feeling like you need something clever or meaningful to say. Simple mundanities are great. Such openers are akin to symbolic rituals, like shaking hands, which don’t have much meaning on their own, but open up the possibility of greater things.

2. Not being able to keep a conversation going.

Even if you’re able to initiate small talk with someone, another obstacle often presents itself: how to keep the emerging conversation going. After you’ve asked someone where they’re from, and what they do, your nascent exchange can run onto the shoals of awkward silence and sink before it’s really gotten started.

The key to preventing this social shipwreck is to follow the close-ended questions you initially ask, which can be answered with “Yes,” “No,” or just a word or two (e.g., “Are you new?”), with more open-ended questions that require slightly expanded answers (“What brought you here?”). Open-ended questions typically begin with What, How, or Why (“What was your favorite part of that experience?” “How did that change effect you?” “Why did you decide to go with that option?”).

Each answer someone gives you provides more “surface area” that you can direct a question to and ask them to expand on further; as each revelation on their part elicits another follow-up question on yours, you can practically keep a line of dialogue going indefinitely. But while people will thoroughly enjoy talking about themselves, slip a little in about yourself from time to time too; you don’t want your questioning to feel like an interrogation, and people won’t feel as connected to you if you don’t reveal anything about yourself.

Whether you’re talking with new people or old friends, once certain topical threads have been exhausted, you can think of new ones to surface using the acronym FORM:

3. Not bothering to think of conversation questions beforehand.

In our culture which celebrates “authenticity” and spontaneity, you may figure you’ll just generate questions on the fly, right in the midst of your interactions. And hopefully you will.

But any real art, whether of painting or conversation, involves skill, and some forethought.

Whether you’re about to meet a new person or an old friend, it’s valuable to think about some questions you’d like to ask them before you get together. It’ll only take a few minutes and you can do it as you drive to meet them.

If you’re going on a first date, mentally review some good questions to ask — ones that will keep the conversation flowing and help you get to know them better.

If you’re going to hang out with a friend you haven’t seen in a while, think about the things they told you last time that you can ask for updates on: “How did the product launch go?” “How’s your mother’s health been doing lately?” “Did things get resolved with the AWOL contractor?” Think about what you’ve seen on their social media feed that you could ask for more details about: They posted pics of a recent vacation — “What were the high and low points of the trip?” You saw a pic of them at the finish line of a marathon — “How did you feel during the race itself?”

While an adept conversationalist will be able to generate good questions spontaneously, according to how a discussion unfolds, they also have several prepared questions in their back pocket, ready to surface when things start to lag.

Nonverbal cues have 4X more impact on the impression you make than what comes out of your mouth. So even if you’re saying all the right things, if your body language doesn’t support your words, you could be contradicting and canceling out their effect.

Conveying the latter effect largely comes down to positioning yourself in two ways, which, in primitive times, would have been associated with threat/safety, and still viscerally read that way today. First, you reveal the parts of your body that would be vulnerable to attack, largely the heart and neck. Second, you communicate that the parts of the body that could pose a threat or conceal a weapon, like closed fists or hidden hands, hold no harm. Adopting a physical posture that utilizes these two ideas instinctually communicates that you are both accessible and unafraid, open and confident.

You can accomplish this effect and correct your bad body language in the following ways:

One of the most important parts of body language centers on the little sockets on your face in which your free-moving eyeballs gaze out into the world.

People who make little eye contact with other people are perceived as distant, dishonest, and insecure.

In contrast, numerous studies have shown that people who make higher levels of eye contact with others are perceived as possessing a load of desirable traits, including attractiveness, warmth, honesty, sincerity, competency, confidence, and emotional stability. And not only does increased eye contact make you seem more appealing in pretty much every way to those you interact with, it also improves the quality of that interaction. Eye contact imparts a sense of intimacy to your exchanges, and leaves the receiver of your gaze feeling more positive about your interaction and also more connected to you.

You want to keep eye contact with the person you’re talking to about 70% of the time. That means you’re not locking eyes with them at every moment of the interaction, which would come off as creepy staring. Instead, every 5 seconds or so, about the length of a sentence, you look horizontally away from the person, before returning your gaze to theirs.

It’s physically impossible for each of your eyes to look into both of someone else’s eyes at the same time. Rather, you’ll focus both of your eyes on one of their eyes for a time, before periodically switching to the other.

Giving good eye contact is one of the easiest social skills to practice, as doing it wrong or incompletely won’t result in immediate negative feedback (the interaction just won’t go as well as it could have). Start making eye contact with people you’re already most comfortable with, like your family, move on to friends, and then try it on people you’ve just met.

6. Not thinking about how the other person feels.

When you think too much about how you’re doing while you’re talking with someone else — Am I coming off well? Does she like me? — you become self-conscious, and start to act awkwardly.

Rather than thinking primarily of yourself during an interaction, it’s best to think more of the other person — how is he or she feeling? Imagine yourself as the “host” in every situation, no matter where you are and who you’re meeting with; how can you make your “guest” feel more “at home” — more comfortable, unburdened, recognized, and understood?

When you approach every interaction as a host, not only will the other person enjoy himself more, and will thus feel a greater affinity towards you — the provider of good times and warm feelings — you’ll enjoy yourself more too. The less you think of yourself, and the more you think of others, the better you’ll do at socializing, the more positive a response you’ll get, and the better you’ll feel about yourself.