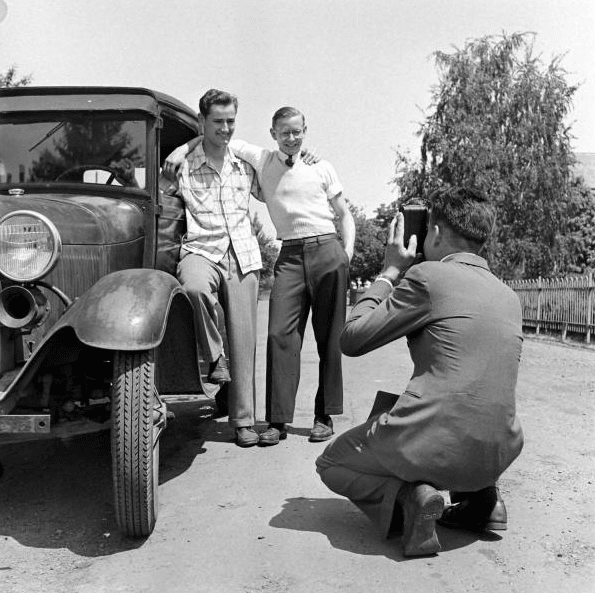 “The friend is the person whom one is in need of, and by whom one is needed. Life is a sweeter, stronger, fuller, more gracious thing for the friend’s existence, whether he be near or far: if the friend is close at hand, that is best; but if he is far away, he is still there, to think of, to wonder about, to hear from, to write to, to share life and experience with, to serve, to honor, to admire, to love.” –Arthur Christopher Benson, “Friendship,” 1908

Mike and I grew up in suburban Connecticut in neighborhoods that were probably one-quarter of a mile apart, but in the parochial world of kid-dom, this was as distant as the other side of the moon. “Three Lakes” kids were a little louder, a little more brazen, and since many came from second generation immigrant Catholic families, they were a little too many. Mike is a year younger, and we rode the same bus in junior high — now called “middle” — school, but I only have the vaguest recollection of him in the back of the bus cutting up with the rowdy Three Lakers, while I stayed in the relative safety of the seat behind the driver.

We met, officially, through a mutual friend early in high school. That was so long ago that I can’t recall clearly what drew us into friendship, and I can’t speak for Mike, but for me, no doubt, it was the same qualities that I saw in Mike that I appreciate still: character, humility, intelligence, wit, compassion, integrity.

As doom and quirky district boundaries would have it, of the 200 or so kids that graduated from my junior high school, about 195 went off to one high school, while I and four other luckless souls went off to a second. We were thrown in with 1,500 strangers, all of whom seemed to have had known each other forever. I was fat, myopic, unathletic, and introverted to the point of social paralysis. Mike attended the other high school, earned good grades without much effort, fit in without being cliquish, and had friends and — unimaginable for me — girlfriends. Given our vast difference in position in the high school social strata, and its often harsh boundaries, Mike could have justifiably turned his back on me and we could have easily drifted apart. But he didn’t.

It helped that my parents had a roomy, if a little scruffy, second home in Vermont, dubbed Really Livin’. It became a magnet for friends and family, and Mike would be a frequent visitor. After earning our driver’s licenses, we made numerous road trips to Vermont for skiing in winter, and hiking, fishing, or just playing country boys during other seasons. These trips not only cemented our friendship, but likely keyed our respective interest in environmental conservation, which has become both our vocations.

It might be an exaggeration to say that on one such outing Mike saved my life. But I’m not sure what would have happened had he not reacted when — get this — I somehow managed to swallow, without chewing, an entire length of shoestring licorice — red, as I recall — so that one end was in my stomach, one end was still in my mouth, and the rest was somewhere in-between. I couldn’t swallow, I couldn’t hack it up, and I was bug-eyed and choking. Mike reached into my mouth, grabbed the stub end and pulled like he was starting a lawnmower. To this day I can conjure the unpleasant feeling of three feet of licorice traveling back up my esophagus, and nearly every time Mike and I have gotten together since, some reference to the Shoestring Licorice Incident comes out, even if it’s just Mike, with a knowing smile, reminding me to chew my spaghetti thoroughly.

Mike stayed in Connecticut for college; I bounced around a bit before finishing my schooling here in Vermont. Heading off to college has been the death knell for many high school friendships. After Thanksgiving or Christmas break it’s found that those commonalities that bound people together are less binding than thought; that lives are heading in divergent directions, and high school was so…high school. But even with Mike and I separated by hundreds of miles, following our own educational paths, our friendship endured. Both of us, I think, recognizing the importance of the bond that had formed.

Mike moved to Virginia not long after graduate school, where he still resides, while I’ve put down roots in Vermont. Both of us are married, and have kids who are no longer kids. “Uncle Mike,” in fact, is my son Doug’s godfather, which has been another facet of our connection. Mike and I both have jobs to go to, bills to pay, lawns to mow, (blog posts to write!), and are enmeshed to our respective communities. Still, after 40 years and largely separated lives, we email each other, talk on the phone often and, most importantly, see each other at least once or twice per year.

When Mike and I do get together, even if it has been a year, there is an immediate ease with each other’s company — no awkwardness, no personality changes to give one pause (our wives would say that’s because we’re both stuck in adolescence), no thoughts that staying in touch was beginning to be just not worthwhile. Mike knows me inside and out; I can let my guard down, be the genuine Buzz without molding myself to the circumstance, and simply enjoy the companionship.

There is no pact, no rigid timetable that spurs our regular get-togethers; it’s simply the desire to see each other that compels Mike and I to visit each other’s homes and families, or plan excursions to do “guy stuff” once or twice a year. When time and commitments allow, we’ll opt to rendezvous at a locale that holds interest for the both of us — which isn’t hard to do. We enjoy the outdoors and arcane history, appreciate offbeat places, and shy away from anywhere that promotes itself as a tourist destination. A down-at-the-heels rust belt city or obscure swamp? Let’s go!

Until recently — as he is now living in California — Doug would frequently accompany me on trips to see Uncle Mike. The three of us hiked around Washington, D.C., after an immobilizing 6-inch snowfall (known as a “dusting” in Vermont), mountain biked in West Texas, kayaked though spring-fed Florida rivers, and, no matter where we go, find ourselves exploring spooky old buildings, invariably once — and maybe still — occupied by the infamous “Ol’ Man Crenshaw.” Our urban exploring-lite makes for great, spontaneous fun at the time, and for embroidered (as Mark Twain would say) stories to swap later on.

Mike and I can be frank or caustic, without causing harm, or even worrying that we might. We can make each other laugh so hard that we cry, sometimes even stone cold sober. We can debate politics without vitriol because, as he should, Mike always sees my point of view. Ha! We both care deeply about the state of our confounding civilization, but can chuckle over the absurdity of the human condition, particularly our own. The last time that I visited Mike, knowing that I was coming, he had rented a backhoe to do some site work on his property. I proceeded to completely trash his yard with the machine, yet all the while Mike kept in good humor. God knows how much the backhoe cost to rent, and how many hours of hand labor it will take to repair the post-apocalyptic damage from my meager equipment operator skills, but, boy, did we have a good time!

As I wrote this piece, I kept stopping to contemplate, “what makes for a long term, long distance friendship between men?” Well, for starters, there are quite a few similarities to what makes for any strong relationship, romantic or platonic: common interests and values, mutual respect, consideration, and an appreciation for the other person, differences as well as similarities. Yet it’s easy for distance, family responsibilities, nearby acquaintances, PTA meetings, weekend chores, work, and even money to deteriorate a once solid bond. But anything worthwhile takes a little effort, a realigning of priorities. To me, having a best friend and spending time with him is well worth any perceived, transient inconvenience. I’d like to think, and am thankful, that Mike feels the same way.

Graduation season is upon us again and high school and college buddies alike are parting ways, as Mike and I once did many decades ago. Making close friends in adulthood has turned out to be much more difficult than my adolescent self would have imagined. It can be hard for everyone, but men especially; while I can count on one finger the number of guys I’ve truly connected with in the last 30 years, my wife’s circle of friends has grown exponentially in the same timeframe. So as you say goodbye to the friends of your youth, and venture off to points unknown, consider doing what you can to stay in touch. You won’t regret the effort it requires, and you’ll probably find, as Mike and I have, that a best friendship is worth holding onto.