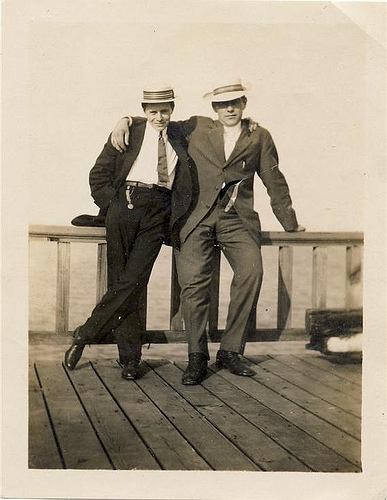 Several weeks ago we posted an article about the history and nature of man friendships. Several readers added comments in which they lamented the difficulty in both making and keeping man friendships, a sentiment I fully sympathize with. Once you’re out of college, and especially if you get married and move, it becomes rather hard to make new friends and maintain the bond with your old pals. I struggle with this problem myself, and so while I won’t claim to be an expert with all the answers, I have spent some time talking with other men and brainstorming ideas for how men can make and keep solid man friendships.

How to Find Some New Bros

Join an organization. Part of the difficulty today’s men face with making new friends is the isolated nature of their social lives. There’s work and home, and not much else. Joining an organization is quite possibly the best way to create a new social circle for yourself.

Some men say that they’d like to join an organization but that they simply do not have the time for it the way their grandfather or father did. But the problem is not a lack of time, but how that time is being utilized. We don’t work that many more hours than our dads did, so there must be other reasons we feel so harried in our daily lives. Take an inventory of what you’re really spending your time on. You might say that you’re spending that time with your family, but how many of those “quality time” hours consist of you simply watching TV or surfing the net? Are you running around to an insane number of your kids’ activities? Everyone wants their kids to be able to follow their interests, but dad needs to have interests too. Does Johnny really need play football, baseball, and soccer? By organizing your schedule more efficiently and cutting down on extraneous time-suckers, every man can have time to be part of an organization. Plus, having healthy man friendships and interests outside your family will make you a saner, more well-rounded man, and thus a better husband and father.

Ideas of Organizations to Join 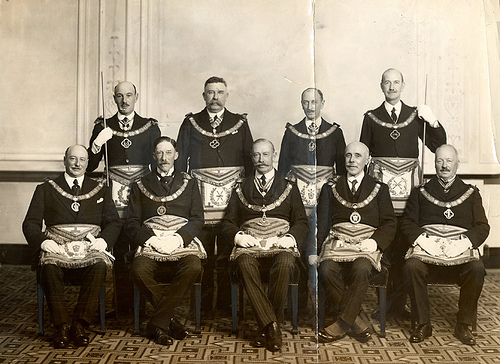 Fraternal Organizations. They’re not just for your grandpa. They can bring great fulfillment and satisfying man friendships into your life. Fraternal organizations are the perfect conduit for friendship-making because they provide all the ingredients needed for brotherly bonding: common ideals, a sense of tradition and responsibility, and a focus on service. There are several great fraternal organizations out there to look into, but it’s hard to argue with the Masons being the best place to start.

Churches/Religious Organizations. Like fraternal orders, churches are a fruitful place to make man friendships as they are a place where you can find gents with the same values and goals as you. Many churches have groups that are for men only and are designed for both fellowship and spiritual growth. 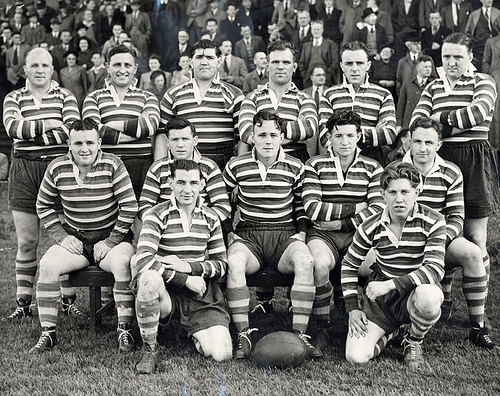 Sports Leagues. If you love sports, instead of spending your weekend alone watching them on TV, join an intramural league and get back on the field. From flag football to ultimate frisbee, your town is sure to have clubs that meet for some good old fashioned man competition. Joining up will whip you into shape, feed your man spirit, and give you the kind of bond with other men that can only be found on the playing field.

Toastmasters. Toastmasters solves two fundamental problems in the life of modern man: a lack of friends and a deficiency in the art of public speaking. Not only will you learn to be a better orator, you’ll also meet lots of other men to befriend. 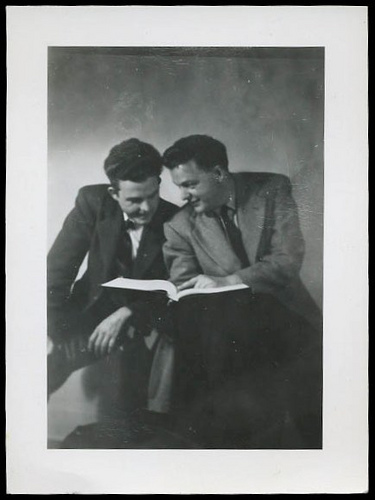 Book Clubs. For some reason (read: Oprah), book clubs have become associated with women, bearing one’s soul, and Kleenex. But there’s nothing sissy about books; discussing great literature was a pastime of many of the great men in history. Benjamin Franklin, for example, started a group called the Junto in which men vigorously discussed books. Talking about the ideas and themes of great books will quickly let you get to know the thoughts and philosophies of other guys. Many libraries offer male-only book clubs that read books men like. If you library doesn’t, why not start one at your house?

Other Ways to Make New Friends

Work. You spend more time with people at work than you do at home. And there are probably some dudes at work that you get along with swimmingly. Instead of keeping them in the “work” friend category, convert them into “friend” friends. Go for some drinks after work. Invite them over to your house to watch the game on Saturday. If you’re married, go out for dinner with him and his spouse. The same thing applies if you’re in school. Don’t be afraid to make a “school” friend, one of your bros.

Television is full of neighbors who turned out to be best buds. Kramer and Seinfeld. Tim Taylor and Wilson. Fred Flintstone and Barney Rubble. Growing up, my dad had several friends in our neighborhood. They’d go jogging together and help each other build fences or remodel their homes. 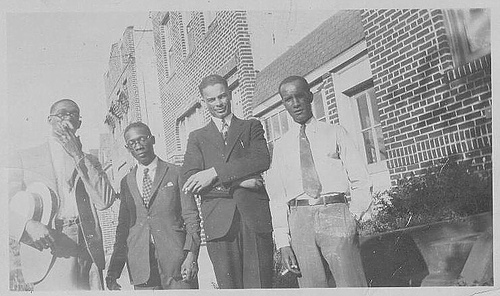 Once you have made friends, whether they are recent acquaintances or buds from first grade, you have to put in some work to keep the bonds alive. In the 19th century, men built their friendships around intense emotional bonds. These days guys like to center their friendships on activities. Here are some activity ideas to keep you in touch with your bros.

Set a common goal. Men experience the greatest bond when they are working together towards a common purpose, when they become a band of brothers. The same is true whether you’re storming Omaha Beach or simply living the suburban life. So set a goal to attain with your friend or a group of friends. Decide to run a marathon or compete in a triathlon, quit smoking, or lose weight. You and your friend can help keep one another honest; make sure to set up a system to ensure accountability. For example, if you’re training for a race, make it a rule that you must email each other your run times every day. Whether you live in the same town or across the country, establishing a mutual goal will force you to stay in touch and have regular contact, while at the same time helping one another become better and stronger men.

Take a Mancation. You may sometimes need to get outside your normal life and take time to focus on reconnecting with your manliness and your man friends. Mancations are occasions for pure, uninterrupted male bonding. Mancations can be as short as a weekend or as long as a week. The destination can be anywhere, but it should involve manly activities. The best mancation is of course camping. The great outdoors and a roaring campfire is the ideal setting for renewing man friendships. The key to the mancation is to make them an immutable tradition. Set a time and make it an annual happening. You can plan the other things in your life around that non-negotiable date. 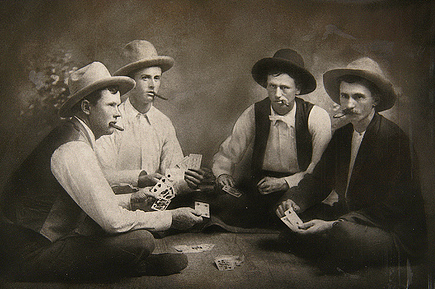 Guys night out. The concept of a “guys night out” has become something of a cliché, often portrayed in movies and television shows and frequently accompanied by unhappy wives angry at their existence. And it is true, some guys abuse the “guys night out.” They make time for their buds when they haven’t spent quality time with the Mrs. Or they go gallivanting around, leaving important jobs around the house undone. Your wife and her needs should always come first. If you haven’t spent time with her, then you shouldn’t be out partying with the boys. At the same time, if you and she have spent ample time together, then guys night out is quite appropriate. Encourage her to have a girls night out as well. Each of you having healthy friendships will improve the quality of your marriage.

Poker night is always a good standby for a guys’ night out. I’ve had some great times with cards in hand, shooting the breeze with my buds. Attending a sporting event or concert is another great guys night out.

Keeping in Touch with Your Buds 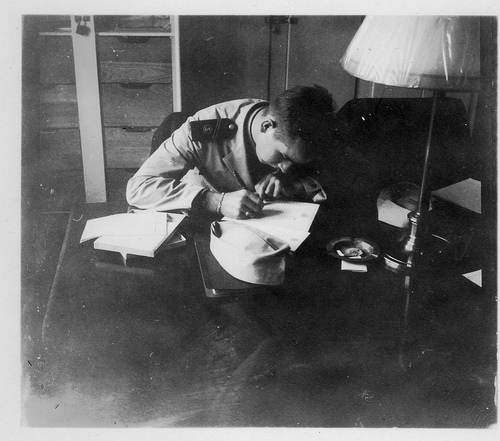 Any relationship, including the man friendship, needs communication to survive. Most guys aren’t big on having heart to hearts. Spending regular time together, even without much talking can be enough. But if you move to different locales, you’ll have to make some kind of effort to stay in touch. Guys generally don’t enjoy talking on the phone, and we usually aren’t big email writers either. But there is a long-standing, centuries old man tradition that has kept man friends connected over whole lifetimes: letter writing.

History is full of great men who maintained their friendships through written letters. John Adams and Thomas Jefferson were the best of friends despite differing political affiliations. However, in the election of 1800 they were political opponents. Jefferson beat Adams in the election, and the men’s friendship hit the rocks. They didn’t patch things up until 1812. After they got back on good terms they started a correspondence that lasted 14 years and 158 letters. The bond they developed through this exchange of letters was so strong that Adams, unaware that his dear friend had passed away only hours earlier, made “Jefferson lives,” his dying words.

Snail mail may have fallen out of favor with most of society, but I think it’s key in maintaining healthy man friendships. Sure email is easy, but it’s also easily ignored. We let it sit there and in a few days it has disappeared to another page and out of our brains. Letter-writing is something altogether different: something real, something tangible leaves your hands and physically plants itself in the life of your friend. There it is, a part of you, sitting on their kitchen counter. People can’t throw stuff like that away. It may get buried, but it will keep popping up and will stay on your friend’s brain, burrowing there until they respond. A letter practically requires an answer. So I strongly urge men to start writing letters to their friends. Commit to writing your friend once a month; it will keep alive your bond no matter where life takes the both of you.