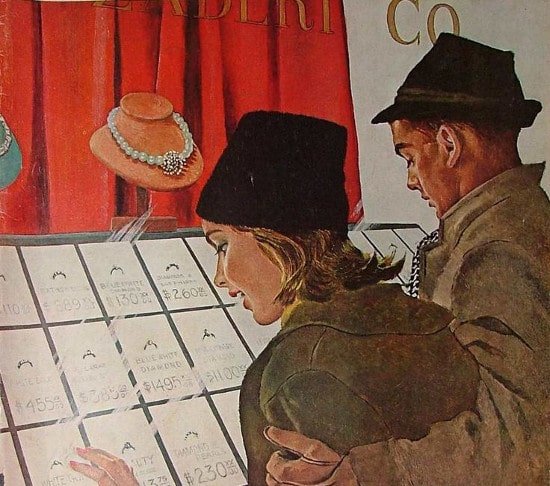 So you’ve found the woman you want to spend the rest of your life with and you’re ready to make it official by getting down on one knee and proposing. The next step is to figure out what kind of engagement ring you’ll be proffering at that singular moment. The choice seems obvious: a diamond, of course. The bigger and blingier the better.

It wasn’t always so, though.

The idea that engagement rings = diamond rings is a modern one that grew out of a shrewd marketing ploy by the De Beers company. Despite the aura that surrounds them, diamonds are in truth neither rare nor special. They are expensive simply because the De Beers cartel has succeeded in controlling both supply and demand.

In the early 1900s, diamonds were a common choice for engagement rings, but were considered just one option amongst many, and people were choosing diamonds less and less often. When folks did go the diamond route, they bought small, inexpensive ones, preferring to spend their money on other things. Needing to get people to buy the heaps of diamonds they were sitting on, in 1938 De Beers launched a decades-long, multi-million dollar press and advertising campaign that sought to imbue the jewels with romantic meaning and social status. Their stated goal was “constant publicity to show that only the diamond is everywhere accepted and recognized as the symbol of betrothal,” and to turn the jewel into “a psychological necessity capable of competing successfully at the retail level with utility goods and services.”

To this end, the agency got celebrities to be photographed wearing the glittery rings, placed them in movies, had radio programs talk about the new “trend” towards diamonds, and even sent lecturers to high schools to talk to young women about the importance of choosing the diamond for their engagement rings.

The tagline “A Diamond Is Forever” was formulated not simply to evoke eternal love, but to intentionally dissuade folks from ever re-selling their jewels; with the public sitting on more than 500 million carats of diamonds, were people to regularly unload them for cash, the market for new diamonds would crater. 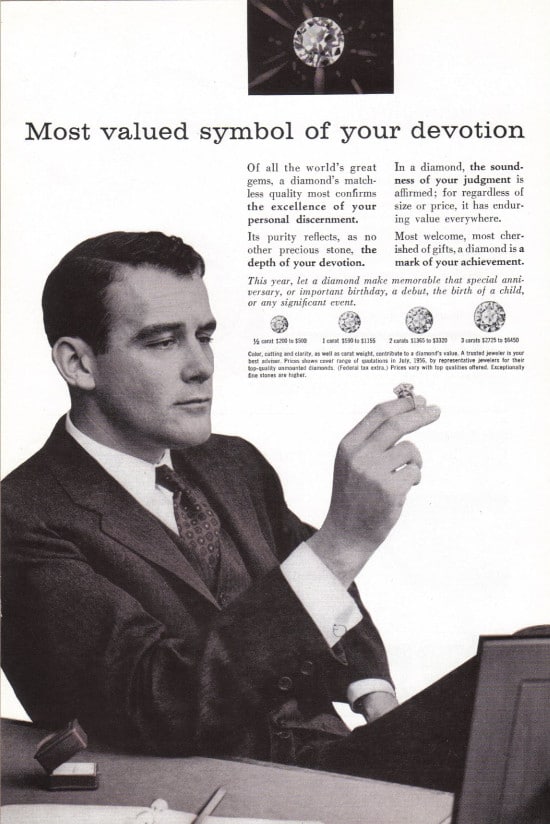 Lest you forget, De Beers is here to remind you that “a diamond is a mark of your achievement.” And the most valued symbol of your devotion…is an overpriced, cartel-controlled rock.

De Beers also expressly worked to increase demand by tapping into the population’s desire for conspicuous consumption, and transforming the diamond into a status symbol both for the man giving it and the woman receiving it. Their ad agency’s report specifically recommended “promoting the diamond as one material object which can reflect, in a very personal way, a man’s … success in life.” To target men who aspired to join the upper classes, they suggested the ads “have the aroma of tweed, old leather and polished wood which is characteristic of a good club.”

The blitz was of course one of the most successful ad campaigns of all time: the vast majority of people now consider diamond rings, and only diamond rings, when it comes time to get engaged.

But some ladies today aren’t into the status quo. Whether it’s a rejection of the diamond’s crass commercial history, a discomfort with the way they’re mined (though “conflict-free” diamonds are an option), a desire to have something more unique or meaningful, or a belief that spending 3-months’ salary on a rock is ridiculous (read: keeper), your gal may wish to think outside the box when it comes to the engagement ring you’ll get her.

If that describes your soon-to-be fiancée, below are several types of engagement rings without diamonds to consider.

Before we get into some of the options, it’s important to emphasize that you shouldn’t propose with a non-diamond ring unless you’re 100% sure that your gal is cool with it. Though it began as a marketing campaign, the expectation of a diamond engagement ring is now thoroughly ingrained in our culture. Even if your girlfriend is the non-traditional type in many matters, she may surprise you (and even herself) with her desire for a diamond. This is a ring she’ll be showing off to her friends after your proposal and likely wearing for the rest of her life, so you want her to be proud of it, and for it to elicit fond feelings, rather than disappointment, whenever she looks at her hand.

So be sure to discuss your girlfriend’s desires and expectations before you decide on a ring.

For the woman who doesn’t want a natural diamond, but doesn’t want to stray too far from modern tradition, man-made diamonds are an option.

While most people think of cubic zirconia when they think of synthetic diamonds, there are actually a couple different categories under this umbrella.

Cubic zirconia and similar materials like moissanite are considered diamond “simulants.” They look virtually identical to real diamonds to the naked eye, but are composed of a different substance.

The advantage of “CZ” (and other simulants) is that it’s significantly cheaper than real diamonds. But unless your lady is wholly on board with this option, I’d say it’s best to steer clear of it. Whenever people admire her “diamond,” she’ll be thinking to herself, “it’s fake,” which is a real romance killer.

Now the second choice in this category is much different – a more recently developed option I didn’t even know existed until I researched this article. These are “laboratory-created” or “cultured” diamonds. It’s not really accurate to call them “synthetic” because they’re created through an atom-by-atom crystal growth process that exactly duplicates the physical, chemical, and optical properties of naturally-mined diamonds. It’s impossible to tell the two apart unless one uses advanced spectroscopy. For all intents and purposes, a lab-created diamond is a diamond.

Because lab-created diamonds can be produced ad infinitum, their price is lower than natural, mined diamonds, though not by as much as you’d think; because De Beers has sensed that these lab-created diamonds may represent the wave of the future, they’ve already made moves to control the market and boost the price! They’re a good choice for a woman for whom “responsibly sourced” doesn’t go far enough, and who would like to further decrease her ecological footprint. 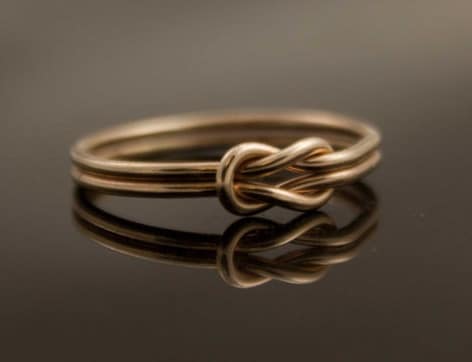 Ring by Indulgent Designs. This kind of knot works well for an engagement (or wedding) ring, as it forms the symbol for infinity — eternal love.

A perfect option for a woman with simple tastes. What better way to show a lady you’re looking forward to tying the knot with her? 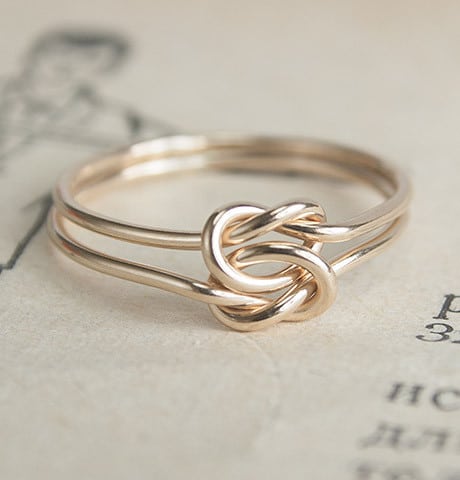 Here’s another kind of knot that’s quite appropriate for an engagement ring. The maker of this ring describes its meaning: “This particular type, often called the ‘true lover’s knot’, was a popular ring style for sailors separated from their beloved. It’s made by interlocking two overhand knots in two parallel wires, so each one is flexible to move about the other, yet they’re inseparable forever. (Aw!) Another fact about this type of knot: in Victorian times, to show if a young couple’s love would last, each would take a small limb of a tree and tie a lover’s knot. If the knot held and grew for approximately a year, their love would stay true.” 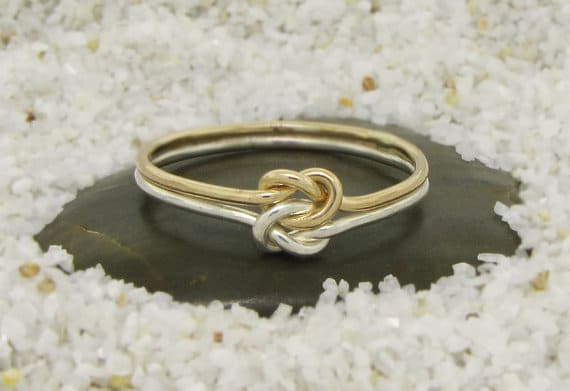 A knot ring made with two different colors of gold works particularly well for an engagement ring, as it symbolizes the entwining of your lives. Ring by TND Creations 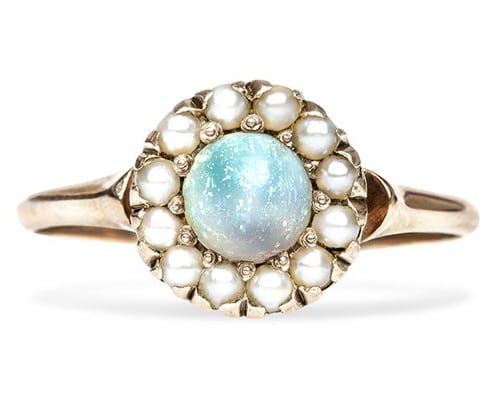 Antique, opal and pearl engagement ring from the Victorian era.

There is a world of beautiful gemstones out there beyond the diamond, and they each have a traditional meaning as well. So choosing a gemstone with a special significance to you and your girlfriend creates a unique ring with a built-in layer of meaning.

Here are the meanings of a few gemstones that may tie in particularly well with your unique relationship and the sentiment you wish to convey when you propose:

Gemstones can of course be put in a variety of settings, and can be featured as a solitary stone or grouped with other gems. Here are two unique ideas we both especially like: 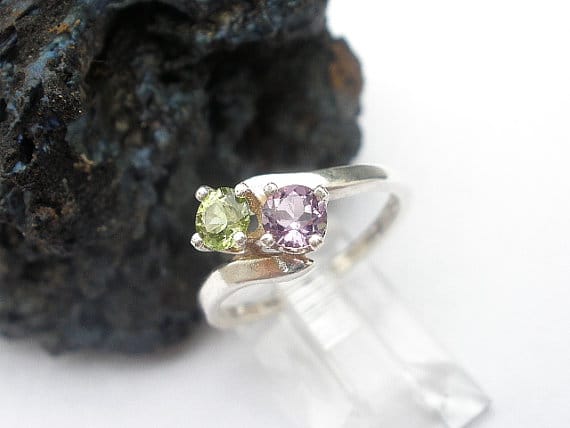 His and hers birthstones: A ring that features yours and your girlfriend’s birthstones is a romantic way to express the feeling that you were born to be together. Ring by Peridot Mountain. 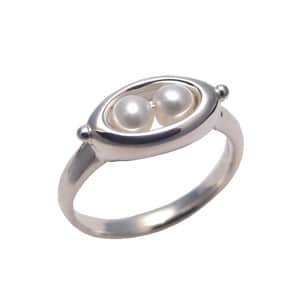 Two peas in a pod: A perfect ring for those who feel they’ve found their other half. From Peapod Jewelry. 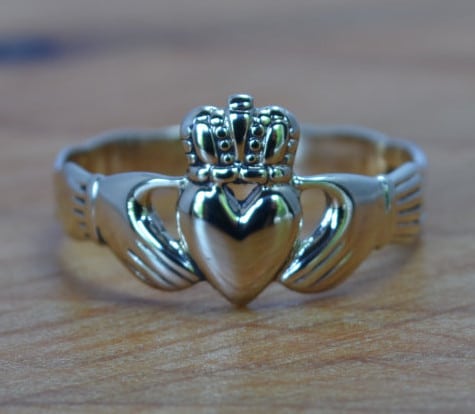 The distinctive Claddagh ring is a traditional Irish ring that is rich in history and symbolism. Dated to Roman times, it is rooted in European “fede rings,” which took their name from the Italian phrase mani in fede (“hands [joined] in faith” or “hands [joined] in loyalty”). The ring features two hands, a heart, and a crown — symbolizing friendship, love, and loyalty, respectively.

The clasped hands represent the pledging of vows, and Claddagh rings were used as engagement and wedding rings during the Middle Ages and the Renaissance. They continue to be an appropriate choice for this purpose today – particularly for a lass with Irish heritage. 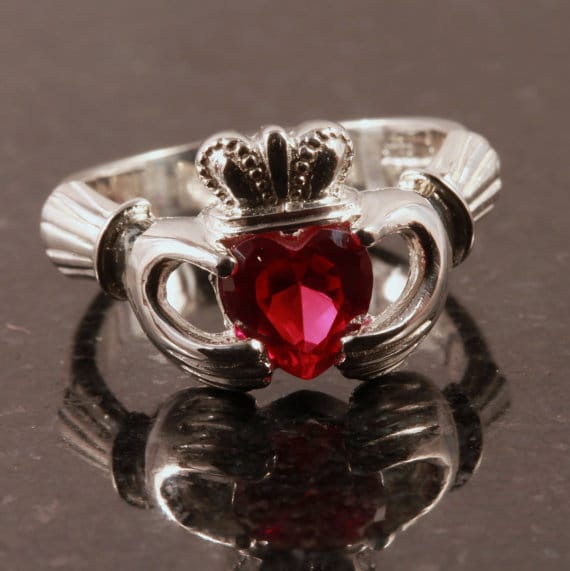 You can combine the Claddagh with a gemstone, like a ruby. Ring by nellyvansee.

Traditionally, the ring is worn on the woman’s left hand with the point of the heart facing out when she is engaged, and then turned around to be facing her once she is married.

It’s also traditional for the expressions “This is my heart which I give to you crowned with my love,” and “Let love and friendship reign,” to be associated with the ring, so feel free to bust those out with gusto when you propose with a Claddagh. 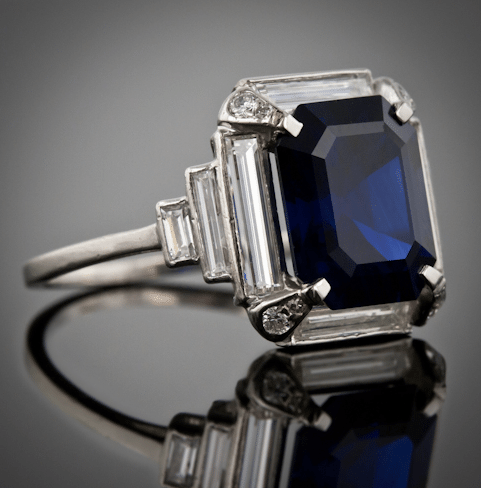 Who knows…maybe Grammie’s got an antique 5-carat sapphire ring stashed in her jewelry box. She’d be happy to give it to you since you’re finally ready to “Stop waiting and ask that nice Jennie to marry you already!”

Before you plunk down some serious cash for a diamond ring or any of these other alternatives, check with your relatives to see if there are any heirlooms waiting to be passed down. Not only does this option save you some serious cash, but pieces with history are much more meaningful and significant. Even a diamond ring that’s been in the family for generations becomes a lot more special than one purchased at Jared. My mother-in-law gave me a diamond ring that had belonged to her grandmother to give to Kate when I proposed. It fit perfectly, and she loved it and wouldn’t have wanted anything else.

If the size or style of an heirloom ring isn’t right for your girlfriend, you can get it re-sized, or you can remove the gemstone and put it into a new setting. 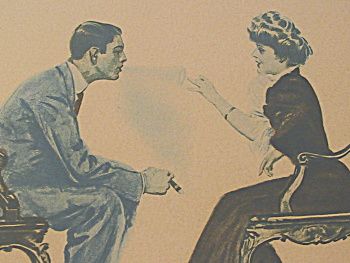 If you’re really suave, you don’t need a diamond or even any of these alternatives. Just a stogie. “Here’s a smoke ring, dollface. How about’s we get hitched?”