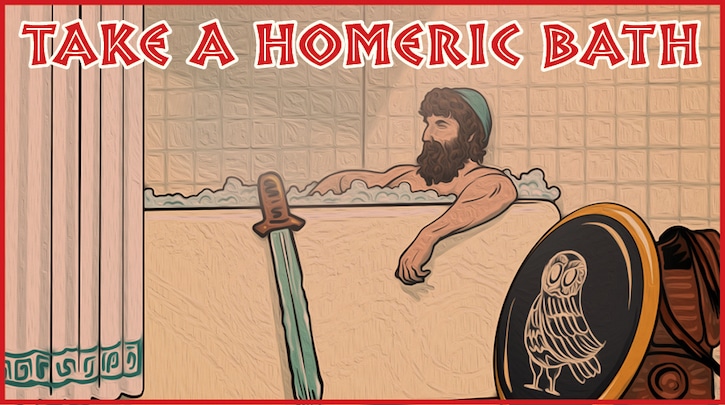 One of the things I love about the Iliad and the Odyssey is that I always notice new things when I re-read them.

During my last read-through, the importance of baths in both Homeric works stuck out to me.

We see this most dramatically in the Iliad after Odysseus and Diomedes kill the Thracian king Rhesus in a night operation. They return to the Greek camp, jump in the ocean to wash off their sweat, and then get into a brass bathtub for a soak. After lolling about in the tub, they anoint themselves with oil.

The bath also plays a vital role in the ancient Greek concept of hospitality, or xenia. Xenia required that Greeks accept anyone into their home who came a-knocking — including strangers. Before a host could even ask a guest his name or where he was from, he was to offer the stranger food, drink, and a bath. Only after the guest had supped and soaked could the host inquire about his identity.

We particularly see the bath of hospitality in the Odyssey. Odysseus’ son, Telemachus, gets a welcoming bath from Nestor, and Odysseus receives a pleasant and rejuvenating bath from the Phaeacians after he washes up on shore.

The bath is also a ritual of homecoming and transition. When a Homeric hero returns home, the first thing he does is take a bath. The bath becomes a ritual that allows the warrior or adventurer to transition from the public world of effort, danger, and striving to a private world of personal and domestic interests.

What’s interesting about these Homeric homecoming baths is that they’re often scenes where a hero’s true identity is revealed. The bath becomes a way for a man to take off both his literal helmet and his metaphorical mask and show his closest confidants who he really is. The bath allows a Homeric hero to let down his hair and be himself. It makes him vulnerable.

The vulnerability of the homecoming and transition bath didn’t turn out very well for Agamemnon. His wife murdered him while he was taking his return-home soak.

But a hospitality-turned-homecoming bath worked out great for Odysseus. When he returns to Ithaca, he does so in disguise and encounters his wet nurse, Eurycleia. Practicing good xenia, Eurycleia offers the travel-weary stranger a foot bath. While washing Odysseus’ feet, she notices the scar just above his knee that he got while boar hunting and recognizes the stranger for who he really is: her master Odysseus.

We see the bath as a ritual of homecoming and recognition again in the Odyssey after Odysseus slaughters the freeloading suitors in his palace. He takes a bath to clean the blood from his body, but also as a way to transition back into being the head of his household. Robert Fagles’ translation of the Odyssey describes Odysseus’ last bath as follows:

The great-hearted Odysseus was home again at last.
The maid Eurynome bathed him, rubbed him down with oil
and drew around him a royal cape and choice tunic too.
And Athena crowned the man with beauty, head to foot,
made him taller to all eyes, his build more massive,
yes, and down from his brow the great goddess
ran his curls like thick hyacinth clusters
full of blooms. As a master craftsman washes
gold over beaten silver—a man the god of fire
and Queen Athena trained in every fine technique—
and finishes off his latest effort, handsome work . . .
so she lavished splendor over his head and shoulders now.
He stepped from his bath, glistening like a god,
and back he went to the seat that he had left

Bathed and restored to his former glory, Odysseus has his famous reunion with Penelope, in which she recognizes her long-lost husband.

We typically think of women taking baths to unwind. But as discussed above, the bath has been used by dudes for millennia to relax and rejuvenate. It’s time we reclaim it, particularly in its Homeric form.

While most of us aren’t out there running spears through people’s necks or slicing out livers like Homeric warriors, we could all use more rituals of transition.

During the workday, we’re elbowing our way through the hustle and bustle of public life. Work requires us to put on figurative armor to deal with the slings and arrows of demanding customers and co-workers and unforeseen mishaps and friction. While only some of us get physically dirty with our work, most of us probably feel a bit of psychological grime on ourselves after a stressful day at the office.

Even though we don’t want to bring that stress home to our families and friends, we often do, as we don’t make a meaningful transition between wearing one hat for our professional roles and donning another in our private ones. This is particularly true for those who work from home; when you go to the office, you at least have the commute as a kind of passage between work life and home life. For those who WFH, the former and latter completely bleed together.

A bath can serve as a pivot point between the two modes of being — a way to wash off the psychological gunk of acting and behaving for others so you can shift into your private self.

After you come home from the office, or after finishing your at-home work day, take a bath before you head into the rest of the evening.

If taking an end-of-the-workday bath is impractical because you’ve got a family who wants your attention as soon as you walk through the door, take your bath after the kids go to bed to mark the transition between the time you dedicate to others and the couple of hours you get to yourself.

If you don’t have time for a daily bath, take one on Friday nights to decompress from the previous days’ stress and mark the transition from the workweek to the weekend.

As far as what a 21st-century Homeric bath looks like, while you probably aren’t in a position to have a maidservant and goddess on hand to soap you up, you can still turn your bath into an intentional, relaxing ritual.

Fill a tub with hot water. Put in some Epsom salts, scented perhaps with lavender or eucalyptus. Light a candle. Decompress.

After soaking for 15 minutes or so, dry off with a nice towel and put on a cozy bathrobe. Anoint yourself with oil . . . or just some Gold Bond lotion.

Slip into some comfortable non-work clothing and go engage in the personal pursuits of your choosing. Hang out with friends. Spend time with family. Work on your hobbies. You’ve sloughed off the garbage of the workaday world and transitioned to private life.

Life’s hard. We got to find ways to decompress and relax. Exercise, meditation, and sleep should all play a role in that restorative process. But don’t forget the Homeric bath.