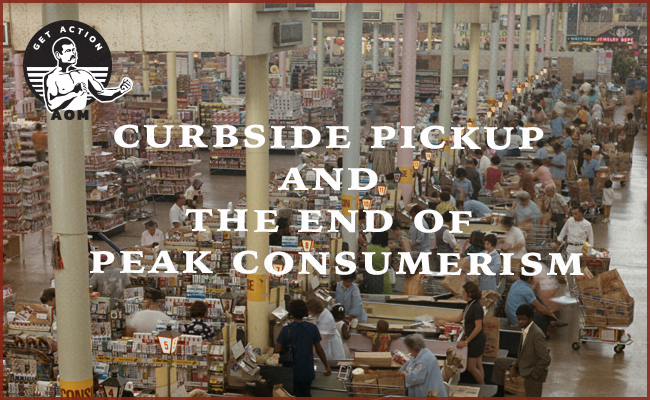 The other day, I found myself walking around a large grocery store, after a several-month hiatus from stepping foot inside one.

I hadn’t avoided shopping out of a fear of COVID-19; rather, our family had just gotten into the habit of having our groceries delivered, because it’s so dang convenient.

After being away from in-store shopping for a while, I felt like I saw the store with fresh eyes. And what I was so strongly struck by, was just how full it was of absolute — and pardon my French, but this is really the most apt word here — bullsh*t food. Flamin’ Hot Funyuns, 3D Doritos, Twix-topped yogurt, Little Debbie Oatmeal Creme Pies Cereal (which admittedly does sound really good). A dozen different kinds of Oreos. Endless varieties of soda and frozen dinners. Aisle after aisle of unnecessary, unhealthy, laboratory-created, market-tested, packaged products that could only be called food in the most generous sense.

This isn’t the observation of a health food crank, a rigid purist. My diet is relatively healthy, but also often includes a daily pack of Pop-Tarts. I’m not opposed to eating a smattering of processed foods.

It also isn’t at all an original observation. Health experts have for years described grocery stores as being nutritional wastelands, and advised the public to only shop the perimeter of the store, the areas where the fresh, whole foods — fruits, vegetables, meat, dairy — are generally positioned.

It’s simply that after having a little sojourn away from the store — becoming a little less acclimated to what, for all the prior decades of my life, was the taken-for-granted backdrop of my grocery shopping experience — I could finally see, for the first time, what these folks had been talking about.

The experience made me want to hastily vacate the premises and return to shopping online.

Along with the rise of mass production at the turn of the 20th century, came the specter of overproduction. The amount of goods companies could produce exceeded consumers’ demand for them. To resolve this issue, corporations worked throughout the ensuing decades to increase this demand. This they did through advertising, through branding, and, crucially, through novelty — constantly coming out with new models and updating existing products with new flavors, features, colors.

Novelty triggers dopamine in the brain, and dopamine triggers excitement and desire . . . and desire leads to impulse buying.

Rather than shopping being a straightforward, functional chore — walk up to the counter of the general store; ask for an item which was shelved behind the counter in a utilitarian way; buy it — it became an experience: music was piped into the background; aisles were designed with evocative displays.

Even if a consumer went to a store or mall with a list of certain items to buy, they invariably walked out with things that weren’t originally on it, having discovered products they hadn’t planned on buying, but which had grabbed their attention as they browsed.

This kind of shopping experience was well in place by the mid twentieth century and became enormously successful in expanding the public’s desire for goods. At the start of the 1900s, an average American still spent nearly 90% of their income on food and other necessities. By 1960, as Vance Packard reported in The Waste Makers, that picture had dramatically changed:

Today, the average citizen of the United States is consuming twice as much in the way of goods as the average citizen consumed in the years just before World War II. Nearly two fifths of the things he owns are things that are not essential to his physical wellbeing. They are optional or luxury items. And there are signs that physical possessions are becoming too plentiful to accommodate comfortably. Visiting foreigners comment that the abundance of America seems to spill over into the aisles of stores, spread along the highways, and bulge out the doors, windows, and attics of houses.

This picture painted 60 years ago remained largely the same up until the 21st century.

Up until the advent of online shopping began to weaken consumerism’s hold.

When you shop online, you’re more likely to only buy things you really need; when you shop in a store, you’re more likely to pick up extra stuff. Statistically and specifically speaking, consumers spend an average of $50 more when they shop in a store versus online. While retail websites also try to lure you into adding things to your cart by showing you related products and whatnot, in the absence of the 3D, multi-sensory in-person shopping experience — the sights, sounds, and smells corporations have carefully coordinated to entice you to open your wallet — it’s far easier to stick with purchasing only the things you originally intended to. You’ve used an item before; you know you like it; you just keep on replacing it.

I know when our family orders groceries online, we end up getting less stuff than when we go to the brick-and-mortar store. It cuts out impulse buys almost entirely.

Society’s shift towards online shopping, which began more than a decade ago, has exponentially accelerated during the pandemic. While prior to the coming of COVID, people had already converted to buying things like clothes online, many still held out on shopping for things like groceries at physical stores. Over the last year and half, however, more and more folks have started doing almost all their shopping digitally. Online grocery sales increased by more than 50% last year. While only 6.6% of major retailers offered the option of curbside pickup in early 2020, now more than half do. And 64% of respondents to a recent survey said they planned to order more online in the future.

For those who feel that our previous century of rampant consumerism, heedless materialism, and pointless stuff accumulation has carried significant downsides for our mental, physical, spiritual, and financial health, this is hearteningly good news.

There’s been plenty of talk over the last year and a half about how the pandemic may permanently change our individual habits and collective culture for the better. A lot of this talk is more flattering than realistic; while we like to believe in our capacity for turning over a new leaf, as things revert to how they used to be, most of our habits will too.

But a change in our consumption patterns may, happily, be one shift that proves both positive and enduring. It’s not as if corporations don’t have other ways, outside the in-person shopping experience, to entice us to buy their wares. But in a time where people discard the catalogs they receive in the mail without looking at them, block ads on websites, and watch television shows on ad-free streaming services, in-person shopping was one of the last fronts companies had, as Packard put it, to get people to buy things they don’t need and didn’t know they wanted. Thus, its decline may very well represent the death knell for the West’s entrenchment in excess consumerism.

As visits to stores and malls become more and more rare, when people do set foot in them, maybe more and more will get the feeling I had the other day while shopping for groceries — that, you know, this is all pretty weird, and kind of gross. Maybe one day the idea that people considered shopping to be a leisure activity, that they would stroll around buildings for the express purpose of inflaming their material desires — that they would spend their money on that kind of “experience” instead of putting it towards real, participatory experiences out in the world — will seem sort of dystopian.

In a lot of films set in the future, people live in minimalist, streamlined homes and wear utilitarian jumpsuits, and I’ve always kind of wondered why that was; what was it about the future that made people stop caring so much about fashion, about stuff?

Well, maybe it all began with curbside pickup.