I just walked home from Uncle Buzz’s house where he served up a delicious “breakfast for dinner” meal of homemade waffles, hash browns, and sausage. Everything he’s made me has been singularly delicious. He’s a maestro in the kitchen and yet also a man’s man. I’ve always found this combination really impressive.

In almost all primitive societies, the responsibility of preparing food fell to the women folk of the tribe. And with the arrival of the industrial revolution and the cult of domesticity, the home, and of course, the hearth, became the domain of women. While we’ve made great strides in equality since the days of sending our ladies out to pick berries and roots, the association between cooking  and women persists.

This is quite unfortunate. If you’ve ever taken the time to notice, most of the world’s top chefs are men, and cooking has a variety of manly benefits and qualities.

We’ve previously established the manliness of cooking. So today we’re just going to do a little review of the reasons a man should be as comfortable in the kitchen as he’s in the garage.

Cooking makes you self-sufficient. A man strives to be as self-reliant as possible. But if he runs to Micky D’s every time there’s a rumble in his stomach and doesn’t even know how to make scrambled eggs for himself, then he falls short of being able to fully stand on his own two feet. Cooking is a valuable skill that grants us a greater degree of independence.

Cooking saves you money. The manly man is a frugal man. He’s always looking for ways to live within his means. And so he eats in far more than he eats out. He understands how much money can be saved by cooking one’s meals at home instead of eating at a restaurant.

The more clueless you are in the kitchen, the stronger the temptation is to go out to eat. If the choice is between a PB&J at home or a steak dinner somewhere else, the latter is always going to win. As you get to the point where your own meals approach restaurant quality, staying home will become more and more desirable.

Cooking keeps you healthy. It’s shocking to flip through a health magazine and see the nutritional information for restaurant meals. When a Quizno’s Classic Italian Sub has 1370 calories, PF Chang’s Pork Lo Mein has 1820 calories, and Macaroni Grille’s Spaghetti and Meatballs has 2430 calories, eating out not only does damage to your wallet, it also does a number on your waistline. Restaurant meals don’t just pack in the fat and calories either, they’re also loaded with salt; Chili’s Buffalo Chicken Fajitas clocks in at 5690 milligrams of sodium (2,300 mg is the recommended daily allowance).

Cooking allows you to create healthy meals that can still taste great. And you can feel satisfied in knowing exactly what’s going into your meals.

Cooking is creative. Finding years ago that they had no aptitude for painting or music, many men live lives devoid of creative outlets. Cooking is an incredibly creative process and proficiency in this art is within the reach of every man. You take a bunch of disparate ingredients, experiment with and tweak them, and create a whole far greater than its parts.

Many men want to learn a craft, a skill, something they can do with their hands. They consider woodworking or welding, but never consider cooking. But it can produce the same kind of satisfaction as other crafts. Cooking doesn’t have to be a chore; it doesn’t have to be drudgery. It can be something  you really enjoy and even develop a passion for.

Cooking boosts your social skills. Whether you’re single or married, few things can warm the heart of a lady like being able to whip up a tasty meal. Much of what we think of as charm comes from surprising people’s expectations. Because of the historic association of cooking with women, a man who can really cook absolutely endears himself to females. If you’re looking for a way to make your wife happy or impress a girl you like, show them that you’ve got real chops in the kitchen.

Additionally, every man should strive to be a gracious and welcoming host.  Buzz always busts out all the stops in preparing Kate and I delicious dinners and breakfasts. And nothing makes you feel more at home and more welcome then a well-prepared meal.  It helps you share a bit of yourself and your home with your guest .

So today’s task it to prepare a meal with your own two manly hands. It can be breakfast, lunch, or dinner. If you’ve never cooked before, don’t worry; if you can follow a recipe, you can cook. Remember, we’re not talking about adding beef to Hamburger Helper or making a ham sandwich. Make a real meal. If you’re a subscriber to the blog, and need ideas for recipes, download the free Man Cookbook which is linked to in every email or RSS post. If you don’t have time to run to the store, try a site like supercook.com. You enter the foods you  have at home, and it will come up with a recipe that uses what you already have. If you’re still stumped, check out the ideas given below: 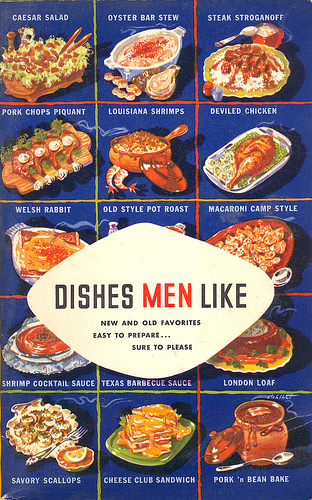 Let us know what you’re going to be cooking on the Community page!